Ocon: We have a direction on particular areas to improve 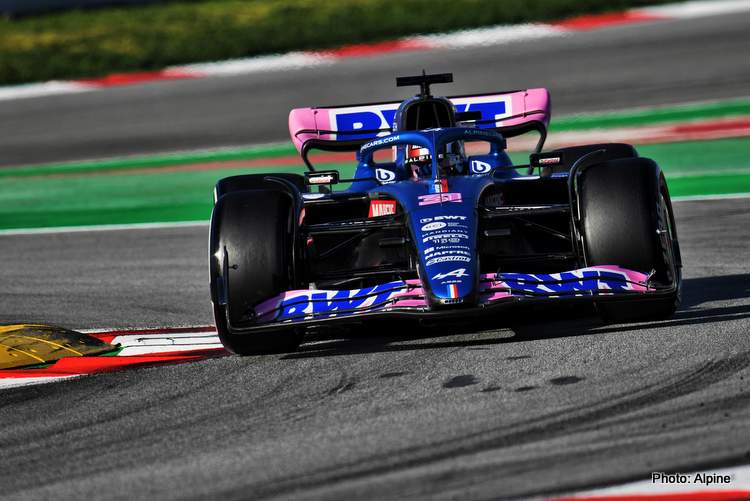 Esteban Ocon got his first taste of 2022 Formula 1, on Thursday in Barcelona, as the Frenchman took to the track in the A522 for the first time, claiming the team has a direction on which areas need improvement.

Ocon took over the driving duties at Alpine from his teammate Fernando Alonso who kicked off the team’s testing activities on Wednesday, as the Frenchman added 125 laps to his teammate’s 129, taking the team’s tally up to 254 laps in total.

The 25-year-old seems to have enjoyed is day in the striking Alpine A522 with it’s pink and blue livery, which also seems to be running reliably, giving the 2021 Hungarian Grand Prix winner enough time to acclimatize with is new ride.

Speaking at the end of Thursday running Ocon said in the team’s press release: “Today was my first proper day in the A522 and it’s certainly a great feeling to be back in a Formula 1 car and doing lots of laps.

“It was good to start to get a feeling for the car on proper tyres in accurate testing conditions. The most important target for us today, like yesterday too, was to do lots of running so to do over 100 laps is encouraging,” he explained.

“We tested a lot of different things and we’ve given ourselves a couple of ideas to work on. We definitely have a direction on the particular areas to improve, which is the main objective at pre-season testing.

Ocon’s teammate Alonso spoke to the media on Thursday and said: “The car was OK. Like everyone has at the moment, we have had some issues . We tried to understand the car and where to operate for gaining the best set-up. It was a positive day and we covered a lot of laps. It’s an interesting week for everybody.”

The Spaniard then gave his impression of the new cars and said: “We are a couple of seconds slower probably than last year. It seems we will be like that in some circuits at least.

“That’s never the fun thing from the driver’s point of view. We drivers, always want to be faster and faster and driving lighter cars. But in a way, I agree that high-speed especially feels good,” he explained.

Alonso claims the visibility in the new car “in some of the street circuits, maybe a challenge” because the drivers “don’t have the same vision from the cockpit, and the front tyres are bigger”.

“We’ll see. I think it’s a new challenge for everyone,” Alonso concluded.

Alpine’s Sporting Director Alan Permane expressed his satisfaction in the team’s running on the second day of testing in Barcelona despite a minor stoppage which was resolved easily.

“It was another solid day here where we spent the morning doing some set up work and understanding more about the car, learning of course on every run,” he said.

“In the afternoon, we ran a race simulation which went well. The car ran reliably, and we had one small stoppage for a bracket on the floor of the car that had broken which we had to replace. Aside from that the new power unit and the chassis ran faultlessly,” Permane explained.

“Tomorrow’s afternoon session will be wet as it will be a Pirelli wet session. Fernando will jump back in tomorrow to continue his work from the first day with Esteban driving the car in wet conditions in the afternoon,” the Sporting Director concluded.

Alpine finished the second day of running 14th in the timing sheets, with Ocon’s best time being a 1:22.164s achieved on the C2 tyre compound. (Additional reporting by Agnes Carlier)