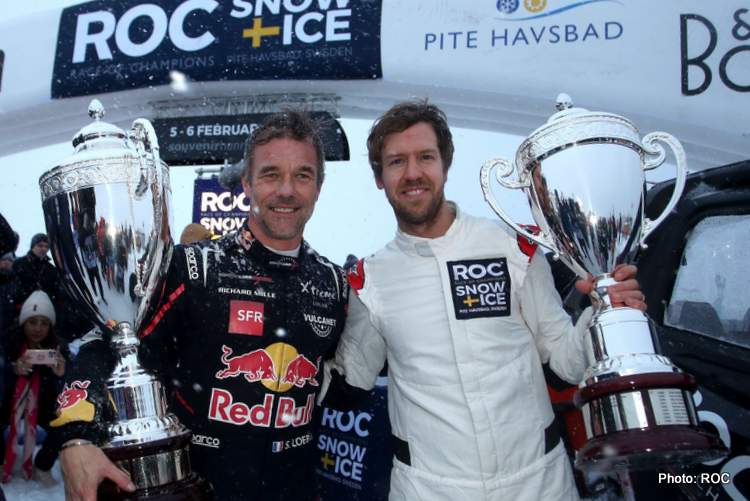 It was a day of non-stop action on the frozen Baltic Sea at Sweden’s Pite Havsbad, just 60 miles from the Arctic Circle, following Team Norway’s triumph in yesterday’s ROC Nations Cup, all cooperation went out of the window today.

The individual Race Of Champions pitted some of the world’s greatest drivers head-to-head on ROC’s iconic parallel track, purpose-built on ice for the first time. After an unprecedented tidal surge saw yesterday’s racing take place on just the inner half of the track, today the drivers could let rip on the full circuit featuring ROC’s famous crossover bridge.

On an afternoon of heavy snow at Pite Havsbad, the Race Of Champions saw greats of global motorsport battling it out for glory in a mix of identical machinery – including the FIA RX2e electric rallycross car, Porsche 718 Cayman GT4 Clubsport, off-road Polaris RZR PRO XP and the 100% fossil-free biofuel-powered SuperCar Lites.

In front of packed crowds of Swedish fans braving the cold, the best-of-five Grand Final boiled down to a duel between a pair of true legends: Loeb and Vettel.

Loeb: It was a nice fight with Seb in the final and I had a good feeling

After a thrilling finale as both drivers pushed to the limit in the blizzard, Loeb saw off his German rival by three heats to one to be crowned ROC Champion of Champions for the fourth time. He thus equals the all-time record set by Didier Auriol, his partner for Team France in yesterday’s ROC Nations Cup.

Loeb said: “It’s been a long time since I was last at the Race Of Champions, so I’m happy to find out that at 47 years of age I still have the pace! This adds to my good start to the season: second in the Dakar Rally, first in Monte Carlo and now a victory here at ROC.

“It wasn’t easy for us to go up against all the Swedish and Norwegian guys because they are more used to these conditions. I also knew it would be tough adapting between the Porsche, buggy and rallycross cars. But after I made it through against Petter Solberg I got more confidence with each run.

“It was a nice fight with Seb in the final and I had a good feeling – except for when I completely lost control of the car in the third heat! Now here we are, and it’s great to equal Didier’s record of four ROC Champion of Champions titles.

“We also need to congratulate the Fredrik Johnsson and the ROC organisers who have done a great job all week in difficult circumstances. They had to deal with a practice track that sailed off towards Finland, a snowstorm during practice and a rising sea.

But everyone kept up a great mood and a positive attitude, with no stress, always finding solutions. And they found it,” added Loeb. 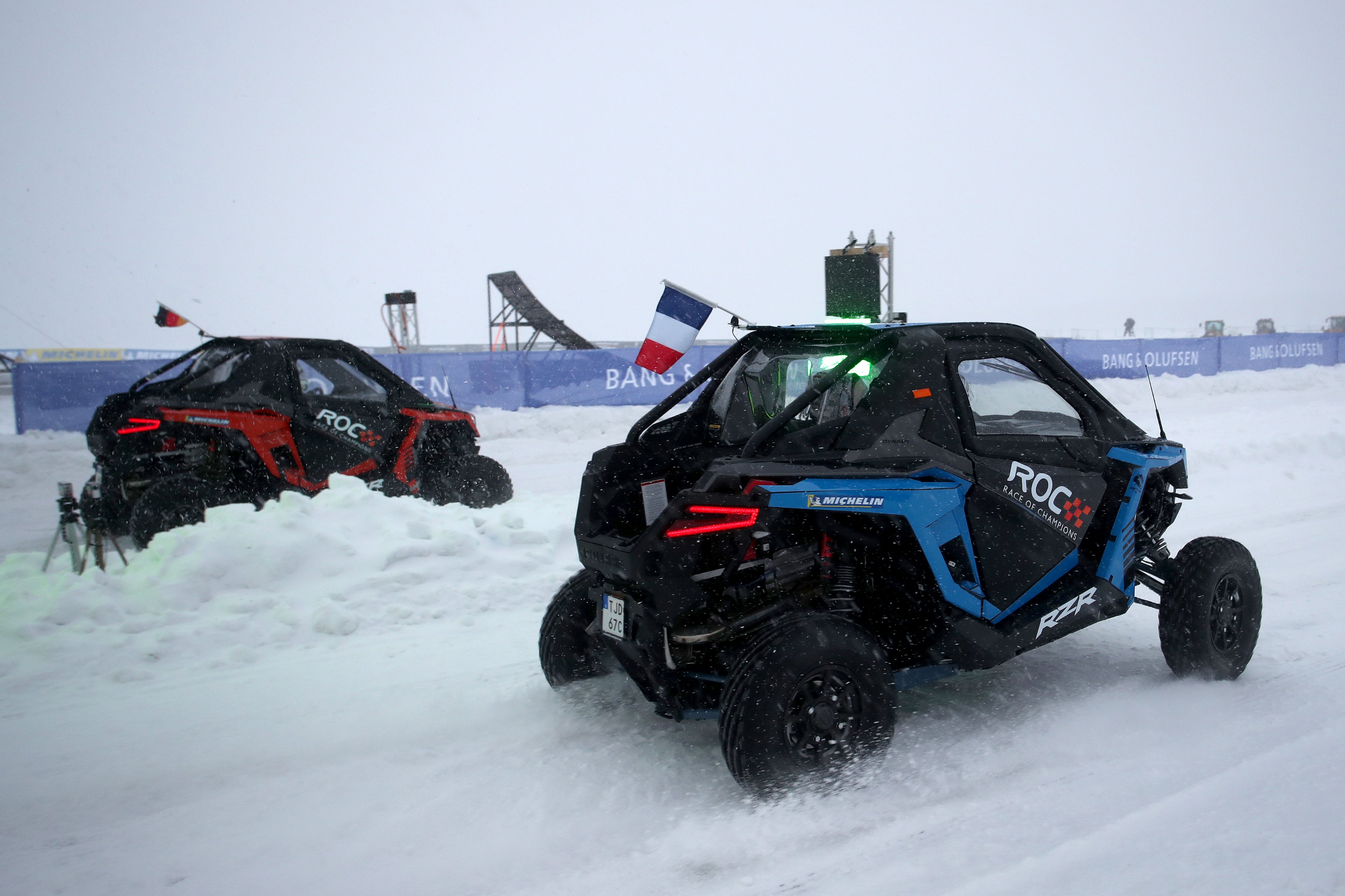 Aston Martin f1 driver, Vettel was humble in defeat: “Sébastien was just too fast today. The conditions were tricky out there and it was getting more and more slippery, which I guess is normal for snow and ice! I don’t have that much experience so it was a struggle to adapt; in my day job getting sideways is what we try to avoid.

“But I felt I was improving every time I drove. That’s a good sign, but also a sign that I still have a lot to learn. Yesterday was a short day because I let Team Germany down and we went out very quickly, but today I could get more into the groove.

“I knew the final was a big stretch and I maybe pushed too hard, but I knew I had to go for it to be close to Seb. l made mistakes here and there, so in these conditions, I have a bit of catching up to do…

“We’ve missed two years of the Race Of Champions so it’s great to be back and to have a sense of normality. I’ve really enjoyed coming here on a different surface too, and it’s special to be on Fredrik’s home soil. It’s great to have the fans back too and I’m impressed to see so many people in the crowds.

“I don’t know how they can stand the cold and the wind in their face, but they seemed happy and up for it! Now I hope we can come back to Sweden again,” added Vettel.

To reach the Grand Final Loeb and Vettel had to see off a field featuring 18 of the world’s greatest drivers. Because the track conditions on snow and ice can change quickly depending on the weather, ROC’s traditional group stage did not take place.

Instead, this year’s Race Of Champions used a straight knockout system with the field split into two halves: one featured the international racing drivers while the other had the rally experts and those with more experience of off-road driving.

Thus gave Seb bragging rights in the racing drivers’ half of the draw, though the Dane was hampered by a mechanical problem in the first heat.

On the rally side, Loeb finished on top of the pile having brought an end to a spirited run by double DTM Champion and FIA World Rallycross Champion Mattias Ekström, who was the last Swedish driver standing in front of his home fans. The match went to a deciding third heat, won by the Frenchman.

The quarter-finals, which were decided over two heats, saw many big names bite the dust – not least seven-time NASCAR Cup Champion Jimmie Johnson, who lost to Kristensen. IndyCar’s youngest ever race winner Colton Herta was the other racing driver who went out, beaten by Vettel on countback of fastest times after a 1-1 tie.

On the rally side Loeb saw off rising WRC star Oliver Solberg after a match in which one of their races finished in a dead heat, to the nearest thousandth of a second. The other driver exiting at this stage was four-time FIA World Rallycross Champion Johan Kristoffersson, who lost to Ekström despite winning their first race heat by just one-hundredth of a second.

The Round of 16 was another graveyard for motorsport’s superstars. In the racing half of the draw, double F1 World Champion Mika Hakkinen went out at the hands of Johnson while his long-time McLaren F1 team-mate David Coulthard was defeated by Kristensen. Double W Series Champion Jamie Chadwick and this year’s W Series runner-up Emma Kimilainen also left the competition at this stage, beaten by Herta and Vettel respectively. 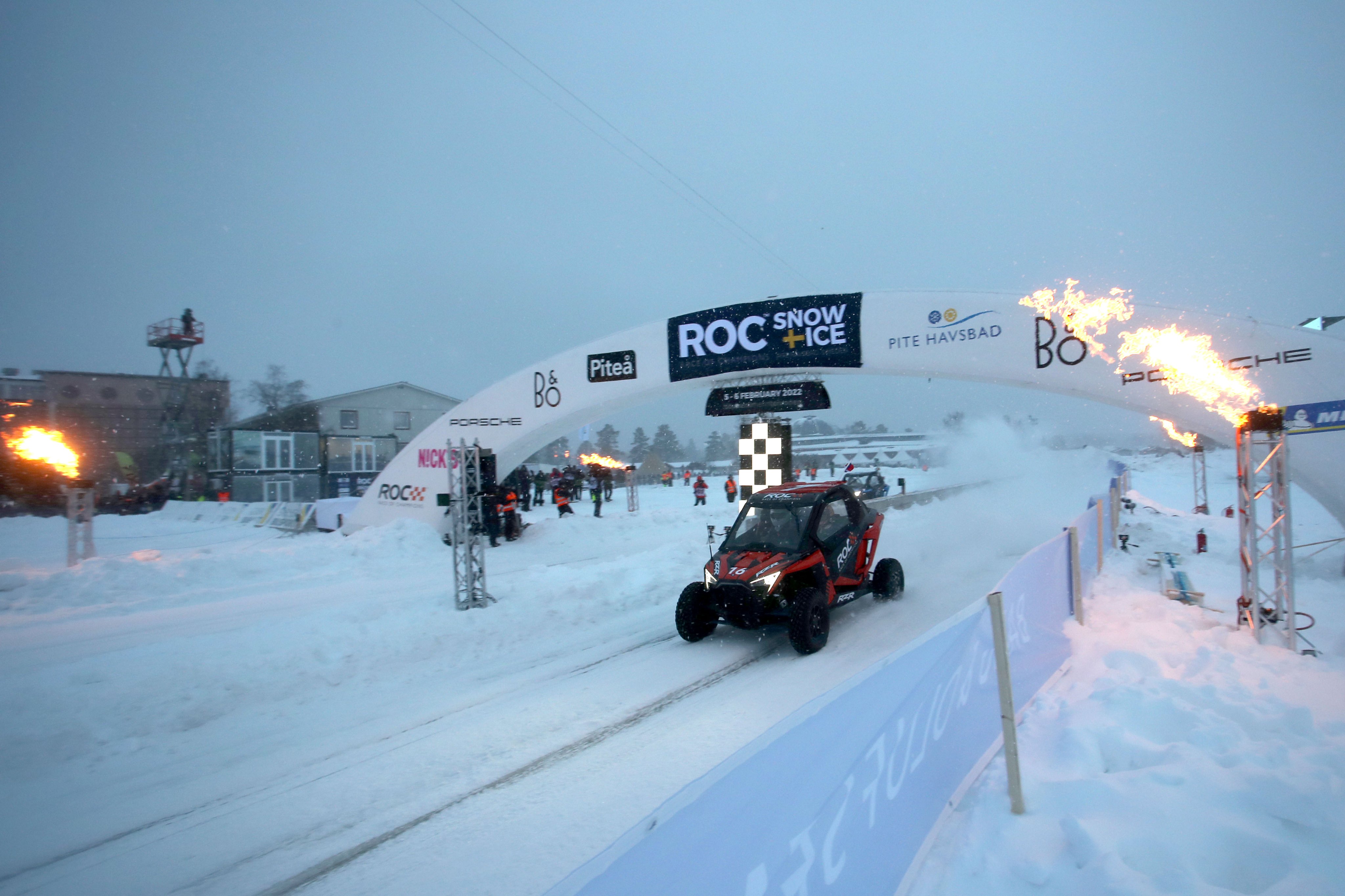 The rally side of the draw was just as brutal. FIA World Rally and World Rallycross Champion Petter Solberg couldn’t find a way past Loeb so there was to be no repeat of yesterday’s ROC Nations Cup glory.

Kicking off the afternoon’s action, four of the racing drivers were matched up in pairs for two Round 1 play-offs. Germany’s FIA F2 and F3 Champion Mick Schumacher was defeated by Chadwick while four-time Indy 500 Winner Helio Castroneves also had to bid an early goodbye after falling to Herta. The Brazilian ace was later seen relaxing in style in the ROC Drivers’ Lounge after declaring he and snow ‘don’t mix’.

Ahead of the main action, the home fans were given a treat as four sporting legends took place in a celebrity race in the Porsche 718 Cayman GT4 Clubsport. The field featured tennis great Jonas Björkman plus Olympic skiing gold medallists Ingemar Stenmark, Anja Pärson and Aksel Lund Svindal, who was the only Norwegian taking on three Swedes on their home turf.

In the end, it was Lund Svindal who came out on top, beating Stenmark in the final by just 0.8 seconds. The skiing great thus added to his home country’s amazing run of success here this weekend following Petter and Oliver Solberg’s triumph for Team Norway in the ROC Nations Cup yesterday.

This year’s Race Of Champions has raised over 1 million SEK (€100,000) towards a selection of worthwhile charities. The key recipients have included German children’s charity Kinderlachen, the Zelmerlöw and Björkman Foundation’s school in Kenya, the ICM (institute for advanced research on brain and spinal cord injuries in Paris) plus a range of the drivers’ other favourite charities.

Today’s action at Pite Havsbad marked the end of ROC Sweden for 2022. We hope you enjoyed this festival of motor sport and entertainment on the snow and ice, and we look forward to welcoming you back for our next event.

It’s @SebastienLoeb who becomes the 2022 ROC Champion of Champions!

Loeb equals Didier Auriol with a record four wins after holding off a hard-charging Sebastian Vettel at #ROCSweden. 🔥🔥🔥

Hats off to both legends! 👏 pic.twitter.com/hXvQ5zrx3F