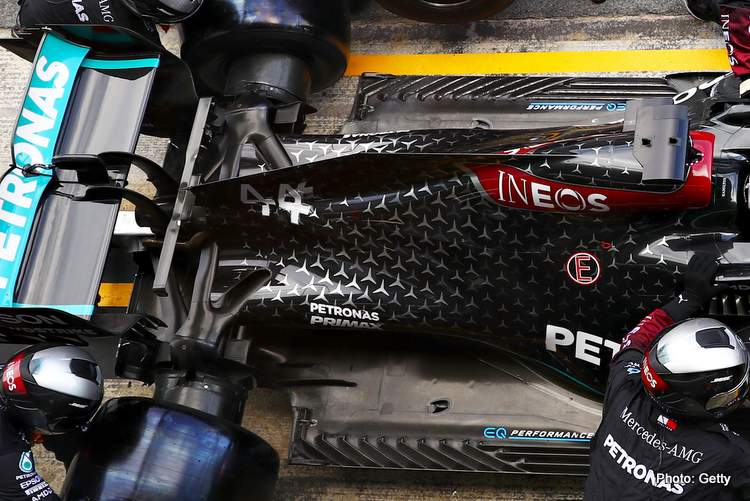 With the previous Tech Draft on J-Dampers bringing up more questions from our readers, this edition will address them along with Mercedes’ rear ride height dropping system referred to last time.

Two very interesting questions from the discussion raised by readers relating to J-dampers were, would they be effective in the control of the porpoising effect in early era ground effect car, and if I could explain how the 2021 Mercedes Formula 1 car’s rear ride height dropping (or stall) system worked?

To help answer both questions, it helps to clarify in what context the J-dampers were used most recently in F1, prior to their banning from the start of this season onwards.

In a previous edition of Tech Draft from 2021 titled “Where did Mercedes speed come from in FP1?” I attempted to describe the Mercedes stall system as best as I could and included a neat technical diagram that is helpful in this discussion. The previous article can be revisited here.

Most, or as I am led to believe, all F1 teams had been springing rear suspension heave with a damper, and indeed of the ‘J’ or ‘intertial’ type.

The early era ground effects F1 was very heavily sprung to provide the required resistance in maintaining minimum ride height, and to ensure the tunnels attitude (pitch/roll and yaw) was maintained as close to nominal as possible. This was critical because full ground effects chassis were very sensitive and any disturbance to the air flow through the tunnels could result in catastrophic, complete, and instantaneous loss of downforce.

The stiffly sprung chassis tended to porpoise, or essentially oscillate vertically, at a frequency in accordance with the springs.
When used to control heave, J-dampers have been proven both mathematically, and empirically to control oscillation very well, and even work against the natural frequency in an almost ‘active’ manner. For that reason, I have no doubt in my mind that their use in the late 1970’s and early 1980’s would have been extremely beneficial.

In my mind I would assume that for similar reasons, because of the finer control of heave accelerations required, the J-damper was intrinsic in the Mercedes stall system. J-dampers with their non-linear absorption properties may have been a key element in the nature of the system to drop ride height once a certain heave acceleration had been reached.

I must confess though, that at the time of writing the Tech Draft I referred to last October that I presumed some sort of gas or hydraulic dampening was being used but having had the opportunity to think further about it, I am convinced inertial dampening was the key.