Hill: We can’t have races where people laugh at us 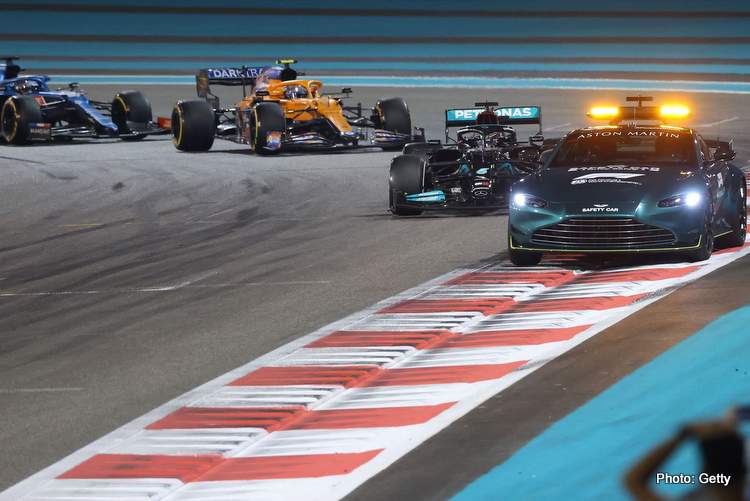 Damon Hill spoke of what happened at the 2021 Abu Dhabi GP, and the FIA’s ongoing investigation of the matter, admitting that Formula 1 can’t have races where people laugh at it.

The 1996 F1 World Champion, who lost the 1995  F1 Title to Michael Schumacher in controversial circumstances as well, was speaking to Sky Sports F1, and gave his view on the what went down in Abu Dhabi’s season finale.

He said: “I think that, honestly, the Lewis Hamilton fans feel very aggrieved, and Lewis Hamilton may well do and Mercedes do, that the way the decision went disadvantaged them and they felt robbed, so it’s a lot of ill feeling.

“The Dutch camp of course, they’re very happy with the result, but was it a satisfactory way of deciding a championship?

“You have to say it was unsatisfactory,” Hill continued. “I think it might even have been unfair, because if you look at it in the point of view of how the decision was made, it allowed some cars to un-lap themselves but not others. Now that in itself is unfair.

“What it resulted with, is a focus on the two title protagonists, and I don’t think you could run a motor race or a championship like that. You have to apply the rules equally to all competitors,” the 61-year-old insisted.

Asked if he though the race was manipulated, Hill said: “Manipulated is a very strong word.

“I think it was in some sense manipulated because I think that Michael Masi, the Race Director was under pressure to allow this exciting, thrilling race to happen between the two drivers, and I think he caved in to pressure from both sides, but possibly more from the attempt to let Max come through the field and that’s why he basically allowed only the cars between Max and Lewis to un-lap themselves.”

What should the FIA do with the investigation?

Asked what he thought should be done with the ongoing FIA investigation, Hill answered: “We’ve just got to get it right.

“We can’t have races where people just laugh at us. I’m afraid, sadly, Abu Dhabi was one of those,” he concluded.

On the same subject, Martin Brundle, Hill’s colleague on the Sky Sports F1 team of pundits gave his view as well, claiming that “mistakes were made on the night” and that, while he does not believe they were caused by malice, such mistakes should happen again.

“What’s really important here for the FIA and for Formula 1 is that this is not swept under the carpet and just left for a few weeks and then overtaken by the new 2022 cars, and the tests, and what have you,” Brundle insisted.

“We need to understand what happened and why it won’t happen again.

“We need to reassure the fans that what they are seeing is for real, genuine, and that they are giving up their free time to watch something that is a genuine competition,” the veteran of 158 grands prix concluded.

Also discussing the anticipate outcome of the FIA’s ongoing investigation, Sky’s Ted Kravitz believes that the FIA’s investigation should focus on the four minutes in Abu Dhabi, between the decision to not allow back-markers to un-lap themselves, and the following decision to allow some of them to do.

“What happened in that crucial four minutes?” he questioned. “That’s what the FIA needs to absolutely be totally crystal clear about and show the fans that they have explained what happened.

“Why did Masi change his mind? Did he have his mind changed for him?” Kravitz speculated. “They have to be totally clear because it is the credibility of the sport that the fans are talking about.”

“On the balance of it, Max Verstappen ended up with more wins and more points and you’ve got to say he deserves the championship.

Kravitz believes that having a team claim mistreatment by F1’s governing body makes it imperative for the sport to sort this issue out properly.

“In the past we’ve had teams on one side going against teams on the other,” he pointed out. “It’s not in this case, it’s the team, Lewis Hamilton and Mercedes, against the governing body of the sport and that’s where the fans feel that what happened in Abu Dhabi was so wrong, and where Mercedes maybe feel so wronged and where F1 has got a problem with sorting out its integrity and its confidence that people have in the sport.

“This commission for the FIA needs to put it clear that ‘look, there was no conspiracy here’ and it was just misinterpretation, a misdirecting, of their own rules, if that’s what they find,” Kravitz concluded.