Alonso: Verstappen, Russell made me watch F1 during sabbatical 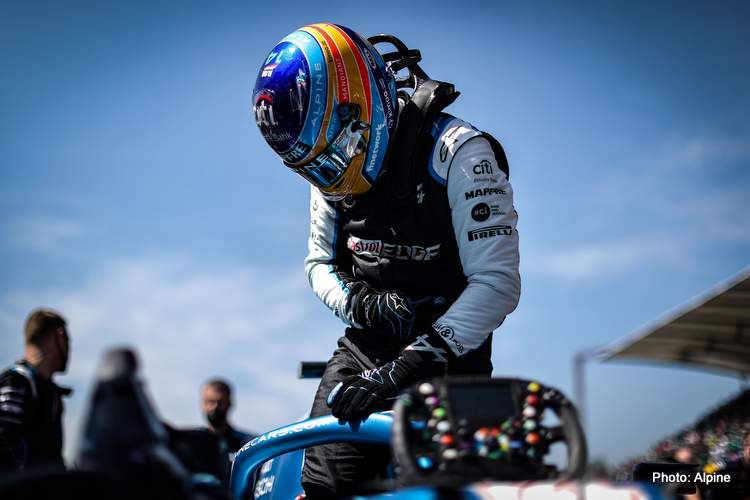 Fernando Alonso spent two years away from Formula 1, but the Spaniard admitted that Max Verstappen and George Russell made him switch on his TV as their performances attracted him to keep watching the sport.

Fernando Alonso first season back in top flight can be easily considered a success, as he was able to get comfortable behind the steering wheel of an F1 car in a short time, and went on to secure a podium (third place in the 2021 Bahrain GP) while his duel with Lewis Hamilton at the 2021 Hungarian GP, driving the inferior Alpine F1 car was the stuff of legends, that eventually helped his teammate Esteban Ocon his and Alpine’s first win in F1.

Alonso was asked by F1’s official website, about the drivers that kept hooked on the sport during his two-year sabbatical (2019 and 2020).

The Spaniard said: “I said at the beginning of the championship as well, before it had even started, in Bahrain, that the driver that impressed me more when I was at home watching on TV was George [Russell], on the performance in the Williams, and Max [Verstappen]. Those were the two guys that I was switching on the TV…”

Alonso’s interviewer revealed that Daniel Ricciardo, being the funny guy he is, hijacked the interview demanding that the double world champion should have been watching him instead.

“And Daniel,” Alonso laughed, quipping: “Because he was in the Renault and that car was very interesting to me last year, but no, I mean, they were giving something extra and that was the reason why I was putting on the TV.”

The 40-year-old’s 2021 season did not start well as he was involved in a bicycle accident ahead of the season debut, but hopes to have a better winter this time around despite revealing that he will undergo surgery in January to remove plates from his face.

“I think we need a good winter that’s for sure, I need to be prepared or to get ready a little bit better than last year; the accident in February with the bicycle didn’t help last year,” he admitted.

“This January I will have to remove the plates from the face so I will have two weeks in January off but probably I had those off anyway even without the surgery because it’s just time to relax.

“But after that we need to go into winter testing with a good programme, physically, and also in the car. And if the car is competitive, I’m sure I will be 100%,” he insisted.

The driver who won his two Drivers’ Championships in 2005 and 2006 with his team Alpine that was under the Renault F1 guise at the time is adamant they a have a chance of a better 2022 season.

“And it’s up to us to do a good car; we will either do it or learn from our mistakes,” he pointed out. “But there are no more [excuses]: we have less budget or we have less resources or they are using two wind tunnels.

“There are no more [of] all those things so it is up to us,” he concluded.

So… how many days until we’re racing again? pic.twitter.com/kNTRzwVYib