Bottas: Lewis develops every year, he works for it 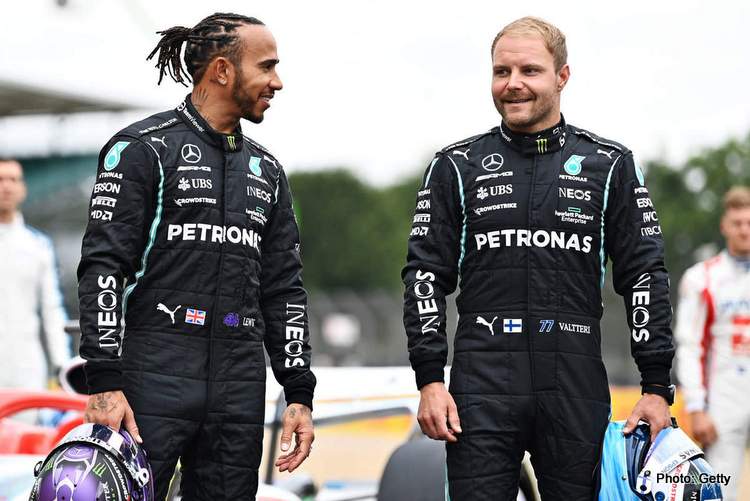 Having spent five years with Lewis Hamilton at Mercedes, Valtteri Bottas is best placed to identify the Briton’s strengths, one of which is that he develops every year, working hard for it.

Bottas shared the same garage with Hamilton for five Formula 1 season, between 2017 and 2021, and was able to see the seven-time World Champion operating from a close proximity on his way to achieving his seven titles, his 103 race wins, and his 103 pole positions.

Hamilton now is Bottas’ former teammate, as the Finn was replaced by young gun George Russell, and will contest the 2022 F1 season as an Alfa Romeo driver.

Speaking to F1’s official website after the 2021 F1 season that saw Hamilton fail to achieve a record-breaking eighth Drivers’ Crown – the honor going to his rival Max Verstappen after a season-long intensive fight – the former Mercedes driver pointed out what he saw a major strength of Hamilton.

“You know, with Lewis, what has been really impressive is that every year he’s been able to develop,” he said. “He’s got such a big experience in Formula 1 but still he’s been able to always learn more, become better and better.”

Bottas who has been racing in top flight for nine seasons now, claims that despite Hamilton having six more seasons under his belt, the Mercedes ace kept working hard at developing.

“For sure, I’ve developed every year as a driver but so has Lewis, and it doesn’t come automatically,” the now-Alfa Romeo driver reflected. “He works for it, because he knows that the competition always gets tougher.

“I’ve definitely learned many things from him, like driving-wise, set-up-wise, lots of small things here and there, but just it’s been impressive that he’s been able to still develop and not to get too comfortable, ever,” he admitted.

“He always wants more out of himself and the team around him, so that’s been the same thing every year – he keeps getting better,” the 32-year-old concluded.

Bottas replaced Nico Rosberg at Mercedes, as the German retired mere days after clinching the 2016 F1 Drivers’ Championship, but the Finn was unable to do the same, as he watched Hamilton go on to clinch five of his seven Championships from a “wingman” position, never succeeding to launch a proper title campaign with the Silver Arrows.

The Finn however played a great supporting role to his former Mercedes teammate, and the points he scored were pivotal for Mercedes to achieve five of their eight consecutive Constructors’ Titles. He was runner up behind Hamilton in 2019 and 2020.

Bottas will now join Guanyu Zhou at Alfa Romeo, where he will be expected to play a leadership role in his new team, while mentoring his rookie teammate, the first ever Chinese driver in F1.