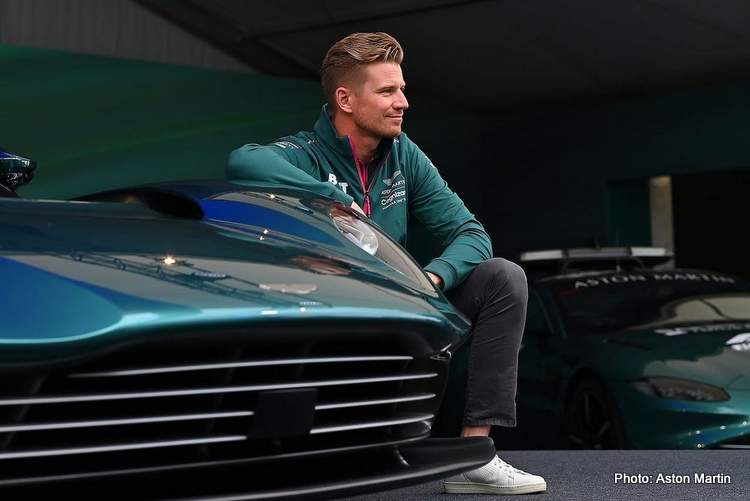 Aston Martin reserve driver Nico Hulkenberg, gave his insights on the 2022 Formula 1 cars, having driven one in the simulator, and he claims they will not necessarily be slower than the outgoing machines.

Hulkenberg’s last season as a regular F1 driver was the 2019 season when he was driving for Renault. After that he spent the 2020 season as a reserve driver for Racing Point, and retained his role with the team under its new guise as Aston Martin in 2021.

Hulkenberg wrote in Linkedin: “After one of the most spectacular and most exciting Formula 1 season we’ve ever had, a big car revolution awaits us.

“The goal: To improve the show with closer and even more intense racing, bringing the grid closer together. The drivers’ skills and talent are to gain more importance again. After the budget gap in 2021, the second major change and the beginning of a new era.

“To this end, a vehicle model has been developed in collaboration between F1 and the FIA that, should produce significantly less of the so-called “dirty air,” the German explained. “In theory, the car driving behind another should able to follow much better in the corners and therefor have improved overtaking opportunities.

“This development interests me of course, which is why I’ve already taken a closer look at the future car,” the 34-year-old revealed.

“One thing that immediately stands out is that the cars look more futuristic and will have 18-inch rims instead of 13-inch ones in the future,” Hulkenberg pointed out. “By the way, these larger tires make no difference to the drivers’ visibility. The Driver will just see more rim instead of tyre wall like in the past.”

Hulkenberg drove the 2022 F1 car in the simulator

Hulkenberg went on to detail his experience with a 2022 F1 car, which he drove in a simulator, and claimed that despite the new cars being expected to be slower and harder to driver, they might turn out faster than the retiring generation.

He wrote: “From my initial experience however, the new cars are pretty damn fast and not necessarily slower than the last generation.

“The driving experience hasn’t changed that much either, at least in the simulator. It will be very interesting to see whether these cars can really follow the car in front better.

“In the simulator, the cornering speeds are extremely high, so the risk of “dirty air” is still given and it´s difficult for me to imagine that following another car comfortably at these speeds will be easy,” the veteran of 179 grands prix mused.

“Anyhow, I hope we will positively surprised. Once pre season testing starts drivers and teams will find out how the cars really behave on track,” the driver – who started his F1 career with Williams – insisted.

Teams who learn quicker will have initial advantage in 2022

Hulkenberg is looking ahead with anticipation to find out which of the ten F1 teams will get their sums right with the new cars.

“I’m also looking forward to see which team and driver get´s off to the best start,” he wrote. “This is where the wheat will be separated from the chaff, and it’s the guys who learn quickly, adapt quickly and adjust well to new conditions who will be right at the front initially.

“Later in the year things can change because it will be a huge learning curve for everybody involved. The development race teams are in, will move the order in such a long season.

“It`s too early for predictions although I would be very surprised if the top teams from previous years will not be near the front,” the Hulk concluded.

Hulkenberg who entered F1 in 2010, raced in top flight for ten years, where he never made it to the podium, holding the infamous record of the longest serving F1 driver never to achieve a podium finish.

That wasn’t due to lack of talent however, as his performance in 2010 (his rookie year), in Brazil, where he put his Williams on pole in wet conditions was proof that he didn’t lack on that front.