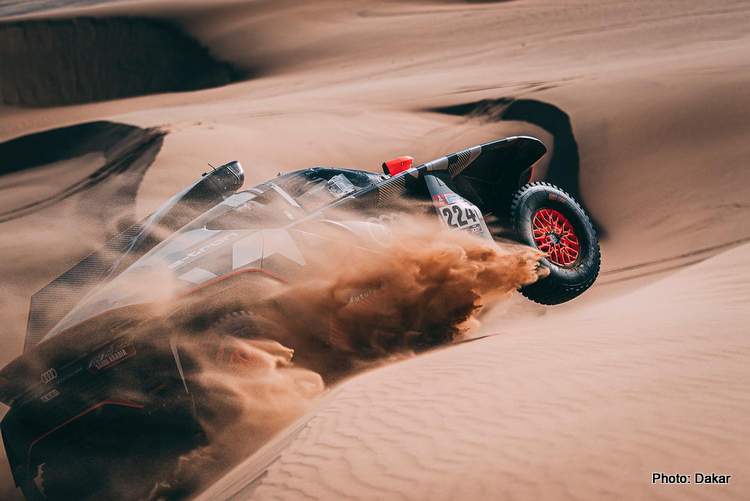 Nine times world rally champion Loeb finished third for the Bahrain Raid Xtreme team in the 395km stage from Al Dawadimi to Wadi Ad Dawasir to cut his Toyota rival’s lead from 45 minutes to just under 38 with four stages remaining.

“We tried really hard from the start, but I had a puncture,” said Loeb.

“We changed the wheel quickly and finally we continued like that until the neutralisation point when we saw that we had lost our spare wheel and it was the only one we had left, so I was a bit careful at the end.”

Last year’s winner Stephane Peterhansel, the Frenchman who has a record 14 Dakar victories on two wheels and four but is out of contention this time, was second in the stage in a first one-two for the electric hybrid Audi.

Ekstroem’s win was also a first on the Dakar for the 43-year-old Swede, a former world rallycross and twice German Touring Car (DTM) champion, and a second for Audi after Carlos Sainz last week.

The Swede was understandably very proud of his stage win, and had some words of thanks for his co-driver Emil Bergkvist.#Dakar2022 pic.twitter.com/l568XqSeOJ

In the motorcycle category, Britain’s Sam Sunderland won the stage and regained the overall lead he had lost on Sunday.

The GasGas rider was three minutes and 45 seconds clear of Austrian Matthias Walkner in the general ranking with previous leader Adrien Van Beveren dropping to third, four minutes and 43 seconds off the lead.

“I had a few crashes in the dunes this morning where I was perhaps riding a little bit too much but I settled down after the refuelling and got a good rhythm, so I´m happy with that,” said Sunderland.

“It looks like the race is really close this year.”