Brown: I’d be surprised if there was dominance in 2022 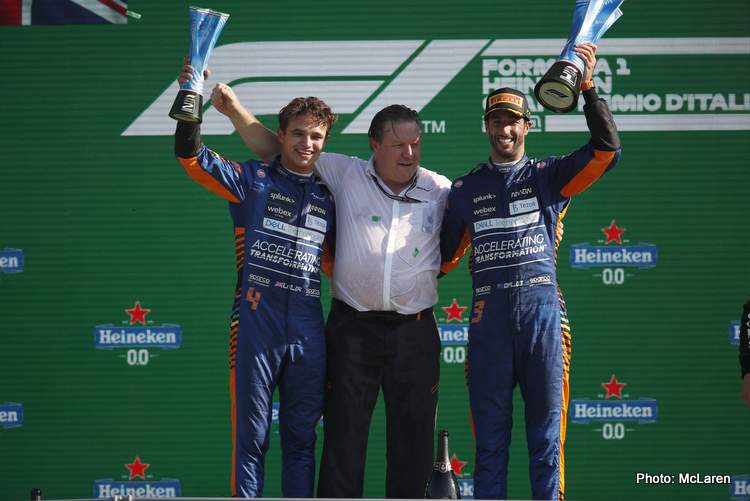 Zak Brown, CEO of McLaren, spoke of his expectations of the 2022 Formula 1 season, with the new aero regulations in effect, admitting he would be surprised if a certain team dominates.

Ever since the beginning of the Turbo-Hybrid era in 2014, F1 has been dominated by one team, Mercedes, who were on a winning streak ever since, taking championship doubles from 2014 up to 2020, before their stranglehold on the sport was broken by Red Bull, in 2021.

Red Bull succeeded with their ace Max Verstappen to take the F1 Drivers’ Crown in 2021 away from Mercedes’ Lewis Hamilton after a thrilling and controversial season topped with a season finale for the ages in Abu Dhabi, a race that took controversy to another level.

Mercedes, however, kept the Constructors’ Title in their coffers achieving a record-breaking eight consecutive teams’ titles.

Zak Brown is hopeful that one-team-dominance will not be a feature of the upcoming season, admitting in an interview with Autosport, that he would be surprised if any of F1’s ten teams ends up dominating in 2022, courtesy of the cost cap and new aero regulations.

“I’d be very surprised if next year was a boring campaign with the new cars,” he said. “I think you’ll get some winners and losers and some surprises. I’d be surprised if there was dominance.”

A new era of regulations always gives the teams chances to find a loophole in the rules, or a silver bullet as was the case with Brawn GP, with their double diffuser giving them the upper hand in 2009 long enough to win both titles, before other teams could catch up.

Brown reflected on that scenario saying: “You could get a team who is maybe dominant for a small period of time like Brawn was when they figured out something in 2009.

“But I think with the cost cap now in place, you can feel the tension that is put on the teams who stopped developing this car in expensive of next year, etc.

The F1 field to continue to close up

“I’d be surprised if the field didn’t continue to get closer,” Brown claimed, and went on: “My hopes are that we go into Abu Dhabi next year with three or four cars who can compete for the championship, I think that’s the ultimate goal.

The 50-year-old American remains optimistic that the 2021 has planted the seed for future thrills in F1.

“I think this year has been spectacular, up and down the grid, and I hope with what has been put in place and the new car designs, and the intent of the new aerodynamic package, that what we’re seeing now is just a taste of the future,” he said.

Despite Mercedes and Red Bull dominating in 2021, Brown’s team McLaren were able to snatch a great 1-2 in the 2021 Italian GP, Daniel Ricciardo leading Lando Norris home, as Verstappen and Hamilton took each other during that race, with the Dutchman’s Red Bull infamously ending up on top of Hamilton’s Mercedes.

💬 @DanielRicciardo: “Even if I wanted to say something other than Monza, like Austin, which was a really fun weekend and I got a top-five in the race, I just can’t. I have to go with Monza.” 🏆

Also hear what @LandoNorris‘ proudest moment of the season was… 👇