Gasly: My priority is Red Bull but they have Sergio… 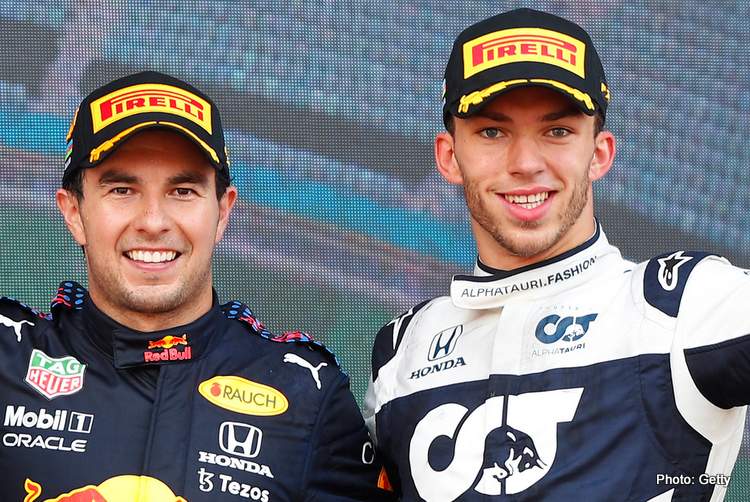 Pierre Gasly, one of the standout drivers of the 2021 Formula 1 season, still hopes for a seat at Red Bull but Sergio Perez will be hard to unseat in the wake of a solid first season with the Blues.

Max Verstappen won the F1 drivers’ title for Red Bull but they lost out to Mercedes in the F1 constructors’ standings. While Sergio Perez, recruited to replace underperforming Alex Albon, won a race for the team but in the end, he did not score enough points to help his new team in their quest.

Nevertheless, for his first season with Verstappen’s team, the Mexican ticked just about all the boxes earning himself a contract extension long before last season ended. Red Bull were very happy with their new driver.

At the same time, there is a feeling in the paddock that Gasly, who has upped his game and is no longer the wide-eyed, young and mistake-prone driver, is ready for another shot at the A-Team.

It can be argued that he has matured into the real deal, a Grand Prix winner and more often than not putting the AlphaTauri places it had no business being in

But with Perez on a year deal to stay alongside Max and sure to up his game, now that the novelty factor of his team becomes his new normal, Gasly’s hopes rest on 2023.

Gasly: They’re saying that probably 2023 there could be an option

Speaking to the Express about his future, Gasly said: “First of all, obviously, my priority is with Red Bull, but at the moment they’ve decided to continue with Sergio. I don’t know what they’re going to plan.

“They’re saying that probably 2023 there could be an option. I’ll try to put myself in the best position for that, but it’s a discussion that we know we’re going to have next year with Red Bull,” added the 25-year-old Frenchman.

After having to go out of their driver programme, headed by Helmut Marko, to hire Perez, Red Bull are now enjoying the fruits of their investment’s once again as the driver pipeline is now flowing impressively with not only Gasly a candidate for the seat.

Also in the loop is 21-year-old Yuki Tsunoda who is still no the finished article but has blistering speed which needs to be harnessed. His second year will tell if he is likely to ever move into the senior team and time is on his side.

Alex Albon is back on the F1 grid in 2022, albeit as a Williams driver. However, Red Bull are likely to be keeping an eye on the 25-year-old Thai driver to ascertain if a year on the sidelines did him and good.

Beyond them, also heading to F1 as time moves on are the likes of Yuri Dips, Jack Doohan Jehan Deruvala and Liam Lawson.

Horner: For 2023 we have multiple driver options available to us

Prompting team principal Christian Horner to say of their driver situation late last year: “For 2023, we have multiple options available to us, so when you’re in the situation that we are, that’s exactly what we want. We have this group of young talent coming through.”

Nevertheless top of the list of driver options, other than Verstappen and Perez, for Red Bull is Gasly who will, for a second season, be teamed up with Tsunoda.

Marko was impressed with Gasly in 2021, praising the driver: “As everyone knows, we have two F1 teams and we’re putting a lot of effort in our fashion brand, AlphaTauri; we need a strong leader there.

“He is driving at his best, but being number one in a very good B-team is a very different story to being number two to Max Verstappen at a top team. Mentally that makes a big difference,” added Marko.

He also previously pointed out that “Checo is 31-years-old now, so he won’t be too long with us.”

From Perez’s perspective, he will want to entrench himself in the team even further by closing the gap to Verstappen in qualifying and delivering more solid performances when the chips are down. Simnply put he needs to be a lot closer to Max than he was during his first year with the team.

That would further end any doubts there may linger about his suitability for the job and would ‘buy’ the Mexican veteran more years in the top flight with the Bulls, alas at the expense of Gasly.

Verstappen: Checo is an amazing human being

Meanwhile, and importantly, Verstappen has only had praise for Perez since he clinched his first title in Abu Dhabi last month: “Of course, when we started working together, it’s difficult to know exactly how it’s going to work out.

“But… Checo is an amazing human being. Not only just to work with in F1 but a super nice person, a real family man as well, and yes, I really have a lot of good times with him and you can see he really means it, and he means well.

“It’s very rare to have a teammate like that and what he showed today, he was a real team player and I really hope we can continue this for a long time,” added Verstappen.

No doubt in 2022, Pierre will be watching the Max and Checo show with interest.