Verstappen: I would like to see Alonso fight at the front 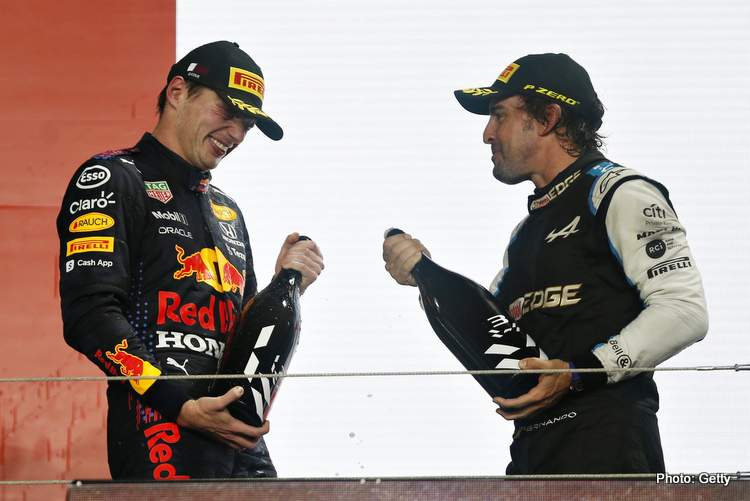 Fernando Alonso has been full of praise for the 2021 Formula 1 World Champion Max Verstappen, the latter saying he would like to see the Spaniard fighting at the front.

Alonso had an impressive comeback season with Alpine, after two seasons away from the sport, the double F1 World Champion scoring a famous podium at the 2021 Qatar GP, while showing throughout the season that he has not lost any of his feisty character or sharp racing skills.

Verstappen believes Alonso is on fire

Newly crowned F1 Champion Max Verstappen was speaking in an interview with his sponsor CarNext, and praised Alonso’s attitude and drive.

“I would like to see him back at the front,” he said.

“He really deserves it, he’s a two-time world champion. It’s also really nice to talk to him and see how he thinks about situations.

“He also [has] that ‘never give up’ [attitude] and is a real fighter. Unfortunately, in the last few years, he hasn’t been able to do that at the front, because he doesn’t have the car,” the Dutchman mused.

“But I like his attitude, he’s really on fire, [has] drive and motivation at his age to still be there in Formula 1, wanting to be there for a longer time.

Alonso had a fantastic season

Alonso reflected on his comeback season with Motorsportweek, and how he developed throughout the season, admitting he enjoyed every race this year

“I think at the beginning of the year, definitely things weren’t easy for us. In my case, getting back to the sport, I was not at 100 per cent ready and confident to push the car to the limit,” he said.

“It took a few races until Baku probably. We made a few changes in the car, on the power steering and the feeling with the front tyres were probably the things I was missing most.

“I think we made a huge step forward on that confidence level. The season overall has been fantastic to me,” the Spaniard revealed.

“Honestly, [I’m] super happy to come back into F1. I really enjoyed every single race, on track, but also off track. I was happy and I enjoy every second. This is my best season since 2014, I think, in terms of points and positions.

“Definitely a good comeback I think. For sure, more prepared for 2022,” the 40-year-old concluded.

As many other drivers on the grid, Alonso will be hoping that his team would deliver a competitive car under the new 2022 regulations enabling him to fight more frequently at the front of the grid.