Bernie striving for equality in his Christmas Card 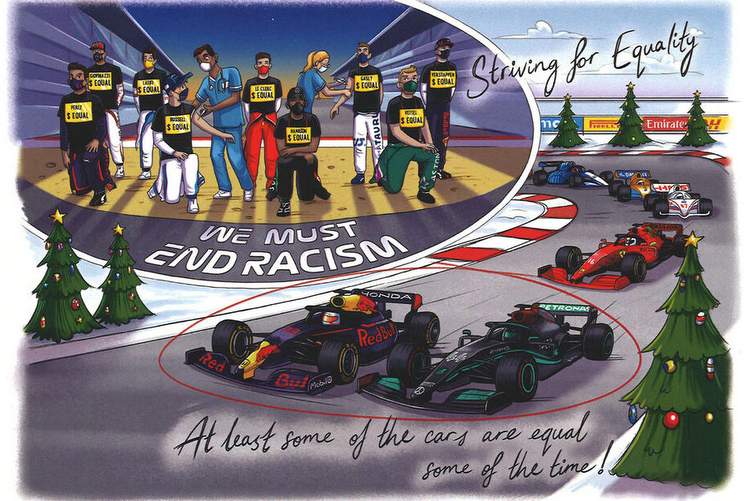 Ecclestone endorsed the “We Race as One” initiative in his Card, as the inset shows some drivers taking the knee and others standing with the phrase “We Must End Racism”, in addition to showing two drivers – George Russell and Pierre Gasly – getting vaccinated for Covid-19, as a message to advocate vaccination as a means to fight the current pandemic.

Bernie, however, wouldn’t be Bernie if he didn’t add a twist to his Card, as the words “Striving for Equality” along with the Dollar signs on the drivers’ T-shirts, clearly a sarcastic hint at the inequality in the drivers’ pays.

Mr. E hints at the close 2021 Title fight that ended with Verstappen winning the Drivers’ Title, Mercedes winning the Constructors’ Trophy as he depicted a Red Bull and a Mercedes side by side on track, but in a league of their own, with the phrase: “At least some of the cars are equal some of the time!”

Behind the leaders, we see the car of Charles Leclerc, and notably the Haas of Mick Schumacher behind the Ferrari and ahead of Daniel Ricciardo’s #3 McLaren. Is the Haas being lapped? Or is it a swipe at the Australian’s 2021 struggles? 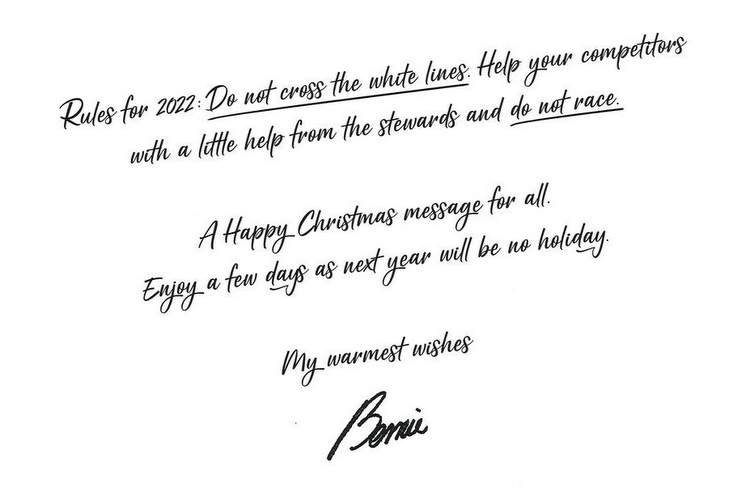 On the back of the card, Ecclestone has the sentence: “Rules of 2022: Do not cross the white lines. Help your competitors with a little help from the stewards and do not race.”

This could be understood as a jibe from the 92-year-old at the FIA and the Stewards for over-policing the track limits applied seen this season, as well as the inconstancies we have witnessed from them as they judged several on-track incidents over the season, with Hamilton’s and Verstappen’s Brazil incident being a standout.

Any other hidden messages?