Brundle: Of course Max deserves it but Masi needs help 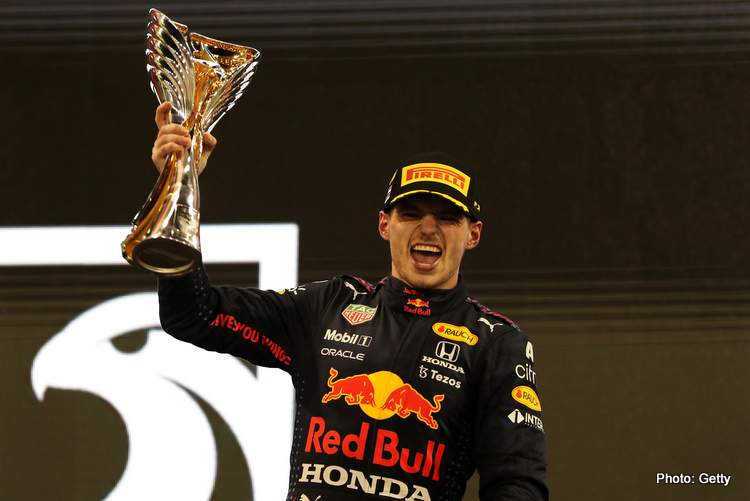 In the wake of the highly controversial 2021 Formula 1 season finale, former F1 driver and respected pundit of the sport Martin Brundle gave his insights on the the Abu Dhabi GP, adamant that Max Verstappen fully deserves the Championship.

It is at moments like those we are witnessing in the aftermath of the 2021 Abu Dhabi Grand Prix, that one feels the importance of having someone like Martin Brundle, whose opinions often provide a proper, unbiased perspective on F1 matters and controversies.

In his final post-race column of the season on Sky Sports F1, Brundle gave a detailed review of last Sunday’s race at Yas Marina Circuit, a race that will go down in the history of F1 among the most exciting and contentious.

Congratulations are on order

Brundle began by congratulating Verstappen on his maiden F1 Drivers’ Title, which he thinks the Dutchman “hard-won with speed, guile and determination and a magnificent team behind him, over 22 races at just 24 years old”, along with acclamation to Mercedes in the form of a “wow and well done” on what he considered an “incredible eighth straight Constructors’ Championship Title” the “mighty Mercedes team” has achieved.

After that, the Briton went down to business analyzing the final race of the season which he described as “most incredible and exciting season of Formula 1, arguably the best in its 70+ year history” that has caused “vitriol and anger from a heavily polarised paddock and fan base”, which “is a shame”, as per Brundle.

“Does Max deserve the championship?” Brundle rhetorically asked, going on to say: “Of course he does.

“He led 652 laps compared with Lewis’ 303 laps. He departed 15 of the 22 races leading the championship including the last seven.

“He won 10 races compared to eight for Lewis (yes I know, we’ll get onto that shortly), and it was 18 podiums playing 17,” were some statistics Brundle relied on to prove his point.

“And he didn’t have the best of luck along the way, until the last few miles of course.”

On the other hand, the veteran of 158 grands prix did not neglect to appreciate the impressive job seven-time World Champion Lewis Hamilton has done this season, despite missing out on a record-breaking eighth F1 Title.

“Lewis would equally have deserved his eighth title, I wish they could share it to be frank,” he said.

“His raw speed, consistency, determination, style, class, and stamina, particularly in the closing stages, was outstanding as he delivered another blistering start in his 288th GP at approaching 37 years old.”

The race in Abu Dhabi must have attracted one of the highest viewer ratings in F1 history, but according to Brundle, F1 didn’t project the best of images at this crucial moment.

“The final few laps in Abu Dhabi, when the world’s eyes were on us in staggering numbers, were not our finest moment and some things have to change this winter. We certainly confused our fans on Sunday,” he admitted referring to the confusions caused by the Race Directors and Stewards on Sunday evening in Abu Dhabi.

Speaking of Race Director Michael Masi, Brundle said: “Michael has strong history directing the Australian V8 series, not exactly a sleepy job I’d imagine but nothing like the spotlight and pressure of multi-billion-dollar global F1.

Will Masi Continue? Will F1 and FIA want him to?

“Now if Michael wants to continue, and F1 and the governing body the FIA want to keep him, then things must change,” Brundle went on, before speaking of the late Charlie Whiting: “Charlie largely wrote the current 98-page sporting regulations, which work hand in hand with the 80-page bilingual Sporting Code.

“There are also several other agreements and ambitions created in various working groups over the years.

“I don’t need to make excuses for anyone but here are some facts. F1 and the FIA have just delivered 39 races in 17 months in a global pandemic, including several hurriedly assembled events and venues.

“When we stepped off the 13hour 45minute flight from Mexico City to Doha, Masi immediately boarded another plane to Jeddah to see the new facility which was barely going to be ready in time.

“Like Charlie, he’s responsible for signing these things off, except we have a lot more races in far-reaching places now,” he revealed.

Whiting has a better support system than Masi

With direct comparisons ongoing between Masi and his predecessor, Brundle believes that is not possible, if not fair.

“Charlie W was rightly revered and feared in equal measure, and any sign of a team playing games in any way would quickly see Bernie Ecclestone and Max Mosley wading in, and then you were in trouble,” he said.

“Furthermore, Charlie had his ultimate wingman Herbie Blash, a man who had attended more F1 races than anybody else, by his side.

“They ate together pretty much every evening too; such was their trust and bond.

“Herbie was effectively the Race Director for the first lap or two while Charlie returned from the starter’s rostrum in what were usually 15-18 race seasons,” the 62-year-old claimed.

“Jean Todt retires shortly after 12 years as President of the FIA, where he has done an incredible amount of work particularly on road safety, it’s an all-encompassing role,” Brundle said.

“However, while we await a new President and his supporting team I imagine the FIA is a little rudderless, and certainly not feared by the teams who lived in great trepidation of Mosley and the ‘bringing the sport into disrepute’ clause.”

The nine-time podium sitter reflected on the broadcasted radio exchanges between Masi and the teams, saying they wouldn’t have gone down well with Whiting.

“Until this year any correspondence from the pit wall to race control was not broadcast, and it’s totally unacceptable to hear team bosses and team managers even pre-empting situations and lobbying,” he said.

“They are only doing their jobs but in earlier days would have been given short shrift by Charlie.

“Toto Wolff’s outrageous call to Masi to lobby for no safety car for Antonio Giovinazzi’s stricken Alfa Romeo in Abu Dhabi, and Christian Horner telling the world seven days earlier how much F1 missed Charlie Whiting because the restart grid in Saudi Arabia felt like a ‘Souk negotiation’, which didn’t age well for him, simply wouldn’t have happened before,” Brundle insisted, going on to say that these communication “tools need to be more regulated”.

Mercedes were too cautious

With the race seemingly swinging towards Hamilton and Mercedes, Brundle insists that Mercedes were too cautious when they might have been better off taking some risks at some pivotal points of the race.

“When that ‘virtual safety car’ arrived on lap 35 despite Toto’s protestations, Mercedes didn’t pit Hamilton, they were desperate to keep track position,” he said.

“This was too cautious and perhaps driven consciously by not wanting to risk having to pass Verstappen. His aggressive driving style with nothing to lose was likely in their psyche and decision-making process.

“If Max had stayed out, given Lewis’ superior speed and then on fresher tyres he would surely have retaken the lead at some point providing he could safely navigate past.

“Nonetheless Lewis still had the speed to win comfortably and had Max’s charge on fresh hard tyres after the ‘virtual safety car’ well covered,” the Sky pundit mused.

“This was despite losing eight seconds being held up by Checo Perez in the sister Red Bull who had stayed out on his original tyres.

“It was good team play, something I’d flagged up the potential of very early in commentary and would have undoubtedly orchestrated myself on the Red Bull pitwall, but it doesn’t make me feel particularly proud for F1,” Brundle admitted.

Race should have been Red Flagged

The Safety Car was deployed to remove the Williams of Nicholas Latifi who crashed at Turn 14 on lap 53, but Brundle believes there should have been a Red Flag.

“In hindsight this should have been a red flag so that everyone could reset, the track could be cleared, and we’d have a straight final championship duel on matching tyres from a standing start,” he looked back.

“However that would set a precedent for more red flags in the future. As potentially could have happened back in Azerbaijan, we don’t want a race, and so championship, finishing with the cars lined up stationary in the pit lane.

“Nobody wants to see a safety-car finish to any GP but there’s a procedure laid out where on the last lap the safety car can take to the pitlane and without any further overtaking the field can take the chequered flag.

“This generates all the right images without a road car with flashing lights apparently winning the race,” Brundle explained.

Rules had a hybrid interpretation

“Masi understandably didn’t want to release the lapped cars until the track was clear of the crashed car, a recovery vehicle, and people,” Brundle pointed out.

“The last two aspects will rightly forever be sensitive topics in motorsport. It’s optional whether it’s deemed safe enough to let lapped cars unlap themselves, of course a safety car always means either an accident, track debris, or heavy rain, but the regulations say ‘any lapped cars’ and not ‘all’.

“Cue the lawyers as just the key five were waved through to put Verstappen directly behind and even alongside Hamilton for the last lap charge.

“Mercedes will forever feel that the last lap was duty bound to be behind the safety car,” he believed, saying that the “hybrid interpretation” of the rules “decided that Verstappen on a fresh set of soft compound tyres as Red Bull had pitted again with nothing to lose, would be world champion instead of Hamilton”.

No malice, but change is needed

“I’m not going to make any accusations here whatsoever that there was any malice or intent in those decisions and actions because I have zero evidence or expectations in that respect, and you’ve all made your minds up anyway,” Brundle claimed.

“I can understand why Mercedes and team Hamilton feel aggrieved, just as Red Bull would have done if the race finished behind the safety car. Talk about being between rock and a hard place.

“I’ve said for years that lapped drivers should fall back behind the runners on the lead lap so as not to prolong the safety car procedure.

“Also the Race Director now needs a trusted and experienced wing man, especially in next year’s 23-race marathon including a new venue in Miami, and teams should be very limited on the number of times they can challenge race control mid-race throughout a season so they are used more strategically when there’s a fair and relevant point to be made.

“We simply can’t have the referee bullied like that,” Brundle concluded.