Horner: One of Max’s best laps of the year, now to convert 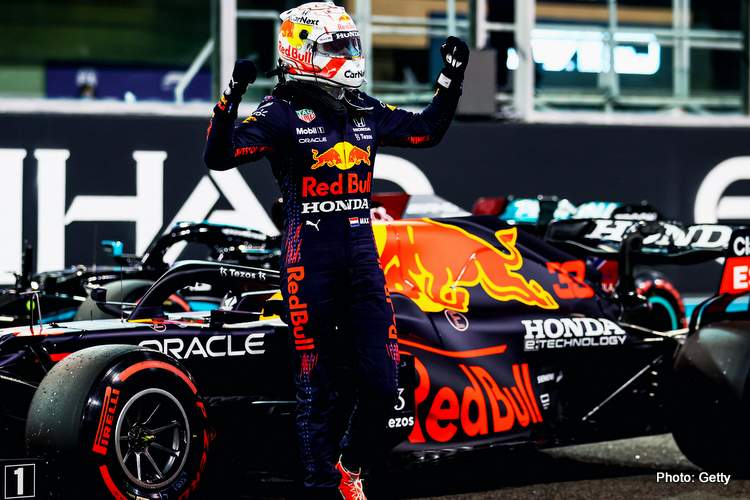 Christian Horner was well pleased with Max Verstappen’s Abu Dhabi Grand Prix pole position winning lap, labelling it the best of the year as their star driver put himself on the front foot ahead of the race that will decide the 2021 Formula 1 World Champion.

Verstappen nearly delivered the lap of the year last time out in Saudi Arabia but messed up. This time, at Yas Marina Circuit, he made amends delivering a flawless lap that was three tenths up on Hamilton’s best effort and tellingly, early a second up on Sergio Perez in the sister car.

Verstappen was in another league on Saturday; Horner agreed: “That was one of Max’s best laps of the year, but now we need to try and convert that tomorrow.

“Both runs in Q3 were exceptional and it was great teamwork from Checo to give him the tow as he did, it was worth a tenth or two, but not half a second. Max has given it his all and is driving his heart out, he’s thrown everything at it.

“Credit has to be given to Checo, he has been a real dutiful teammate and sacrificed his laps tonight, we can’t ask for more than that,” added Horner.

We’re not overly upset to be starting on the softs

While Perez did appear to be in front of Verstappen, it was not close enough to give a significant tow, with calculations indicating the #33 car was an extra 2 kph through the speed-trap which hardly accounted for the gap. Nevertheless, the intent to help his younger teammate was here from the Mexican veteran.

The downside for Red Bull is that Verstappen flat-spotted his medium Pirellis during a second, unnecessary, Q2 run which prompted Red Bull to shift the race strategy to the red band Pirelli softs, instead of the medium tyres which was their original intent; also the rubber which the Mercs will be starting on.

However, this reality did not stress Horner: “When we discussed strategies this morning we were very much 50/50, so we’re not overly upset to be starting on the softs, the medium is a bit more robust but it’ll be interesting to see how it plays out.

“Track position will also be crucial given the degradation. We’ve just got to get our heads down and run our best race tomorrow, as we know how good Mercedes are around this track, it’s one of Lewis’ strongest circuits, so we need to focus on ourselves and hopefully we’ll do enough to win it,” added Horner.

His team face a tough task to overturn the 28 points deficit to Mercedes in this final race; thus the full focus will on Verstappen’s quest to be F1 Champion for the first time, which he would be should he finish ahead of Hamilton or if the Briton does not score points on the day.