Verstappen: Hopefully the softs will work out in the race 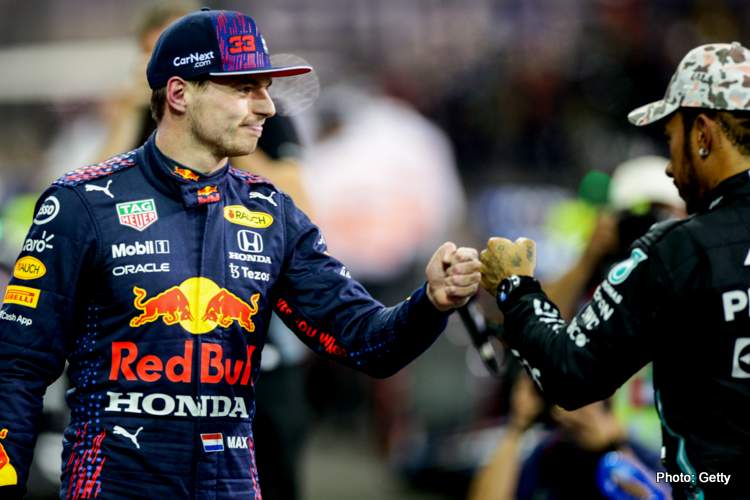 Last weekend in Jeddah Max Verstappen nearly delivered the Lap of the Year but tapped the wall, but today, during qualifying for the 2021 Formula 1 Championship deciding finale in Abu Dhabi, he made no mistakes to claim the most important pole position start of his life with his best lap of the year.

It was a potent effort, typical Verstappen at his max, three-tenths better than pre-qualy favourite Lewis Hamilton who too was impressed with what he witnessed and said so afterwards.

The only blotch on an otherwise perfect qualifying was that Verstappen flat-spotted his Medium Pirelli tyres on his Q2 run, the intention like Mercedes to start with the yellow-band tyres. Max damaged his tyres on a second flying lap which might have been unnecessary as his first attempt was on the money.

Red Bull didn’t flinch as they sent him out for a second-run on Softs, which he will start on for the race, while his rival Hamilton will be on the mediums. How this pans out and who it favours is anyone’s guess.

The balance of power again took a mighty swing, as Verstappen is clearly on the front foot for this one to start with, but the Mercedes could come good later in the race in Hamilton’s hands. Whatever the case a further ingredient to spice up this contest has been flung into the pot at the very end of this incredible 2021 Title race.

Verstappen was chuffed, even fist-bumped rival Hamilton on the way to being interviewed, and reported in parc ferme:  “This is of course what we wanted but never easy with their form from the last few races. Now I’m just looking forward to the race because that’s the most important.

“I felt good on both tyres. Naturally now in the evening, it’s a bit cooler so it should be a bit easier for the soft tyres, but we’ll see.

“It’s very important to have a good start and from there onwards we just try to do our race to the very best, then we’ll see where we end up.”

Verstappen: Checo is a great teammate and a real pleasure to work with so a big thank you to him

Later in the team report, he added: “It’s always good to have a performance like this one, but there are no guarantees for [the race], I still expect it to be a really hard battle.

“I originally planned to start on the mediums but I flat-spotted my tyres so I had to go onto the softs, I actually felt okay on the softs during the long runs so hopefully it will work out in the race.

“So far, the car has been good and throughout the practice sessions, we made some good improvements to the car. I think everything worked out well, especially with Checo’s help, it was nicely executed.

“He’s a great teammate and a real pleasure to work with so a big thank you to him. I hope we have a good start and from there on in we can have a great race.”

The truth is that Verstappen’s lap received little assistance from his teammate according to speed traps, only a 2 kph advantage that did little to aid what is certainly one of the most important top spot starts of the Dutch driver’s life.

From there, he needs to beat Hamilton across the Yas Marina Circuit finish line on Sunday to be 2021 World Champion; if Lewis is the driver that crosses the line ahead of the Red Bull in a points-paying position, then he will be Champ.

If Hamilton does not score points or has a DNF, Verstappen will bag it.

Sergio Perez in the sister car was 0.838s shy, going to show the quality of Verstappen’s efforts; normally the Mexican veteran lacks half a second or so on average.

Perez: I think there is a great race ahead of us

Perez summed up his day in the team report: “I think our teamwork was great, especially for Q3 and I am pleased for the Team and the result, it was very nice to see Max taking the pole.

“Max and I talked about the tow together and with the Team, we managed to do a great one! It is very difficult to time it, if you are too close you can hurt the other car and lose some downforce.

“It worked perfectly; I think if we tried it again then it is very likely it would go wrong! This weekend has been a lot of work for everyone in the Team and we have been pushing extremely hard so I am just pleased we managed to work it out.

“Lining up fourth on the grid is not ideal for me but that wasn’t the main thing today. I lost out on P3 in the final corner but it’s not a disaster, there is still plenty of things I can do.

“My aim will be to make a difference at the front, I will try to get Lando at the start so I can support Max early on. There is still a lot we can do starting on the soft tyre; it is a long game and we don’t think the starting tyre is going to dictate too much.

“I think there is a great race ahead of us,” predicted Perez. (Additional reporting by Agnes Carlier)

Verstappen and Perez pulled off a piece of aerodynamic genius during qualifying in Abu Dhabi ☄️#AbuDhabiGP 🇦🇪 #F1 pic.twitter.com/CVlSeJdhsv