Wolff and Horner shake hands before Battle of Abu Dhabi 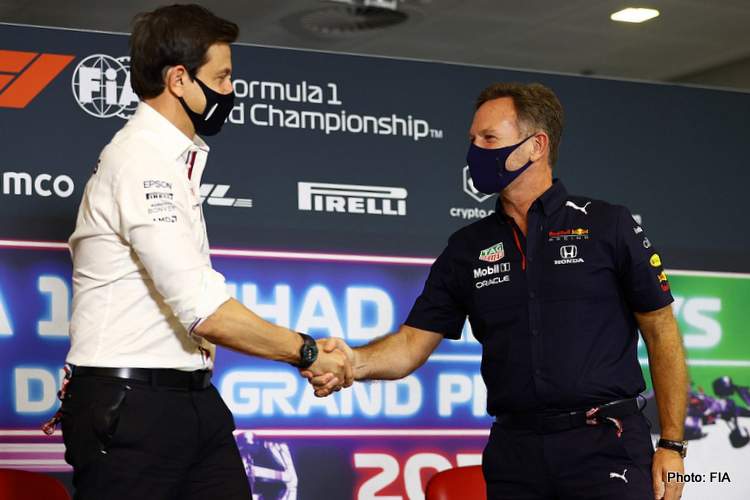 Mercedes team boss Toto Wolff and his Red Bull rival Christian Horner put on a show of sportsmanship ahead of the Formula 1 Title showdown at the season finale Abu Dhabi Grand Prix, after months of trading bitter barbs.

Facing the media with the Constructors’ Championship trophy between them, the pair shook hands not once but twice, taking some of the sting out of the tension that had built up between their two feuding teams.

“We’re competing for two of the biggest trophies in sport, of course the competition is intense,” said Horner.

“It would be totally fake to sit here and say how much we love each other… Because I’m not going on holiday with you after this weekend,” he added turning to Wolff.

Verstappen and Hamilton are level on points heading into Sunday’s floodlit finale at the Yas Marina track but the Dutchman is ahead 9-8 on wins and will be champion if both fail to score.

The pair have made contact three times this season, most recently in the inaugural Saudi Arabian Grand Prix which was marked by heated radio exchanges, controversy and collisions.

But even as the battle between Verstappen and Hamilton has raged on track, Wolff and Horner have been equally punchy off it.

Red Bull are 28 points behind Mercedes in the constructors’ standings, with Horner conceding it would take a miracle to win.

Their run of four straight title doubles was ended by Mercedes in 2014, but Horner will still draw satisfaction from beating Hamilton to the drivers’ title.

It would hand the German marquee a first defeat in the era of the current rules after seven straight F1 world title doubles.

Horner and Wolff have reported each others’ teams and drivers to race stewards, questioned the legality of their cars, cast aspersions on stewards’ impartiality and even traded direct insults.

“As he said, very different personalities,” said the Austrian on Friday. “But it is just the fight for … one of the most important prizes in sport, it’s a world championship. That’s why you cannot expect a lot of schmoozing between drivers, team principals and all the team.”

Horner added: “You know, who would have thought we’d be here this season with an outside shot of going for this trophy? To be tied with Lewis has been an amazing journey, an amazing championship

“Nobody has come close to challenging in the last eight years. It’s been intense, it’s been frustrating on occasions, we’ve pushed the limits, we’ve pushed each other, we’ve pushed our competitors, and here we are at the final race for the showdown. It almost feels a bit like Squid Games.”

Fitting for Horner to reference a popular Netflix series. The streaming giant has made the highly quotable Horner a star through its F1 docuseries “Drive To Survive”.

The Netflix program has been described by F1 insiders as the best thing to happen to the globetrotting racing series in decades because of the show’s behind-the-scenes access to F1 drivers and teams.

Verstappen has seen a big advantage reduced to nil in the space of three races and drove that night in Jeddah as if his life depended on it.

Horner acknowledged: “Max drives in a manner that ignites passion, has brought new fans into the sport this year, and we do not want him to change. We want him to drive in exactly the manner he has that has put him on the precipice of competing with us for the world championship.”

Wolff declined to speak specifically about “incidents or the driving itself,” but suggested Verstappen’s stance is his own perception. And that will influence how you think and how you see the world.

“We also have an influence in having the clearest view of things and that obviously differs from Red Bull, but that’s OK.