Hamilton vs Verstappen war of words before battle 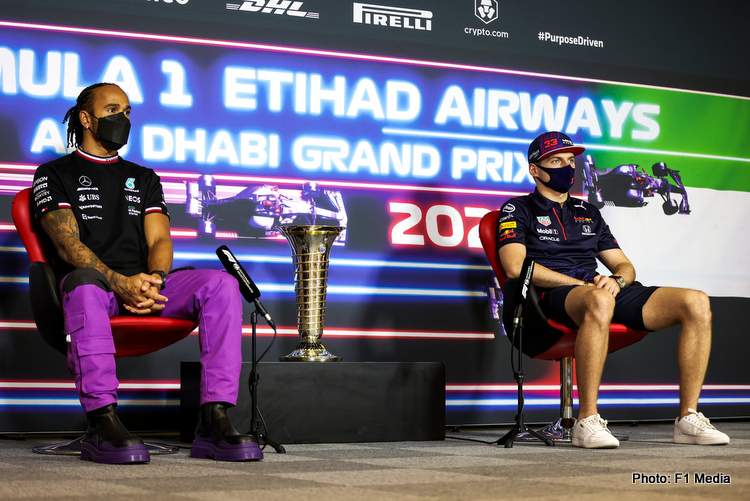 Lewis Hamilton has played down suggestions title rival Max Verstappen could take him out of this weekend’s season-defining Abu Dhabi Grand Prix – a move which would see the Dutchman crowned Formula 1 World Champion.

While the Dutch ace also played down the idea as the pair warmed up for the weekend with a war of words ahead of the showdown tomorrow night at Yas Marina.

Hamilton questions his rival’s tactics while Verstappen feels the victim as the pair go into the final race of the year tied on 369.5 points after a campaign of ebb-and-flow racing.

Red Bull’s Verstappen looked favourite to claim a maiden Title until Hamilton – aiming for a record eighth Drivers’ Championship – found his mojo and won the past three races heading into the finale at Yas Marina.

There have been plenty of incidents throughout the year, with the pair colliding on track and Red Bull boss Christian Horner and Mercedes counterpart Toto Wolff verbally sparring off it.

Claims and counter-claims about the legitimacy of rival cars, personal barbs and shunts on the circuit have punctuated what has already been a season to remember.

During last weekend’s Saudi Arabian Grand Prix, Hamilton collided with the back of Verstappen’s car, resulting in the latter being served a 10-second time penalty, by race stewards, for slowing down without due caution, having already been handed a five-second punishment for earlier gaining an advantage by leaving the track.

Verstappen was labelled a “fucking crazy guy” by Hamilton over the team radio as their rivalry ramped up.

The Dutchman would be World Champion if a coming-together took both drivers out of the race this weekend – something which would not be unique in the history of F1.

But, sat either side of the trophy they are both desperate to claim as theirs, the pair were in a more understanding mood on Thursday evening in Abu Dhabi.

Asked if he trusted Verstappen to keep their battle contained on the track, seven-time champion Hamilton replied: “I do believe that everyone here racing comes to win. I would like to believe everyone wants to do it the right way – I don’t even let that creep into my mind.

“I can’t control those things around me. All I can control is what I do in terms of preparation and how I conduct myself.

“I honestly don’t give it any energy. I’m here to do the best job I can with this incredible team. We go full steam ahead with the same focus and we don’t waste energy on things that are out of our control.”

A record eighth world title has been the target in 2021

Max: I don’t really have a lot more to comment on that

Verstappen, too, was quick to stress incidents similar to Ayrton Senna and Alain Prost in 1990 and Michael Schumacher and Damon Hill four years later – where the two drivers fighting for the title crashed out in the last race of the campaign – were not something that had crossed his mind.

“I think as a driver you don’t think about these things,” he said. “You just want to do the best you can as a team.

“Naturally the media starts to say these things. I don’t really have a lot more to comment on that, just arrive here trying to do the best I can, be prepared and winner takes all.”

Earlier in the day, Verstappen spoke alone and appeared edgier when asked if his view of Mercedes and Hamilton had changed during the course of this year’s title scrap.

“Yes, very much so,” the Dutchman replied. “And not in a positive way. Clearly only I was wrong somehow. Like I said, other people do exactly the same thing and get nothing.

“Both of us were off the track into turn one and somehow they judged that it was my fault, that I don’t agree with.”

Former F1 supremo Bernie Ecclestone claimed that Verstappen had been bullied my his more experienced rival, to which the Dutch ace replied: “I don’t experience bullying but I think what is going on is not correct.”

Arriving at the final race weekend of 2021 level on points at the top of the driver standings? 🏆

12 months ago, @Max33Verstappen didn’t think it would be possible 👀#AbuDhabiGP 🇦🇪 #F1 pic.twitter.com/b92NatJdBl

Verstappen is gunning for his first world title, Hamilton could take a record eighth drivers’ crown

“The other penalty [causing the collision] as well I don’t agree with, then afterwards he [Hamilton] pushes me off the track, he even looks at me, he doesn’t turn in, he just pushes me outside the white line, the track edge, and he only gets a warning for that.

While Verstappen is gunning for his first world title, Hamilton could take a record eighth Drivers’ Crown – but he insists he will be treating this weekend like any of his previous seven successes.

“This is unmarked territory,” he said. “Nobody has ever done eight before. I feel grateful. I remember how it feels going for your first. I have had experience and the rollercoaster of emotions you go through.

“It just feels like another championship for me – you start from ground zero and you are the hunter form the moment you start training.