Dear Kimi, we will leave you alone now 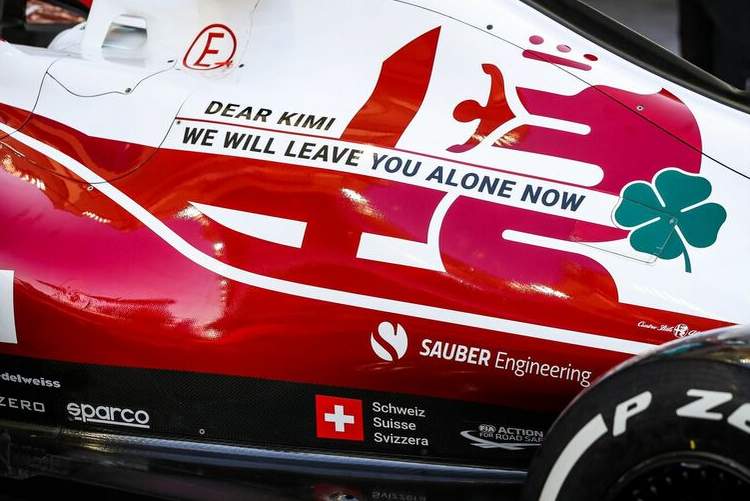 Paying tribute to their departing drivers – Kimi Raikkonen and Antonio Giovinazzi – the Alfa Romeo team have added messages to the respective car liveries ahead of their final race with the team, for this weekend’s Abu Dhabi Grand Prix.

Veteran Raikkonen, whose massive Formula 1 career comes to an end on Sunday night when the chequered flag waves under the spotlights of Yas Marina Circuit.

For the much loved Finn, Ferrari’s last world champion thanks to the 2007 F1 Drivers’ Title he won for them. Remarkably it will also be his 349th and most likely last start in the top flight.

The Iceman has 103 Grand Prix podiums to his name, 21 times as a winner. He drove for Sauber, McLaren, Ferrari, Lotus and Alfa Romeo.

Giovinazzi’s career was less stellar but Ferrari kept the faith loyally and he will leave F1 with 61 starts to his name. He will now pursue a career in Formula E.

Alfa Romeo said in a press release, ahead of the race weekend at Yas Marina Circuit: “The cars of Kimi Räikkönen and Antonio Giovinazzi will sport special messages from the team to the two drivers as the duo brings an end to their adventure with the Hinwil-based squad, a journey together that had started in 2019.”

Raikkonen’s car will feature the tongue in cheek “Dear Kimi, we will leave you alone now” in homage to one of the great one-liners that Kimi launched during his career: “Leave me alone, I know what I am doing”

Fittingly, it was on his way to victory for Lotus at the 2012 Abu Dhabi Grand Prix, this weekend’s venue to the Title showdown between Lewis Hamilton and Max Verstappen, and, as mentioned, Kimi’s last race.

Giovinazzi’s car will feature the words “Grazie di tutto, Antonio” in tribute to the Italian driver’s contribution to the team since his debut the team said.

And added: “The messages will be featured during all sessions of the Abu Dhabi Grand Prix and will be just one of the tributes to Kimi and Antonio to take place throughout the weekend, with the team unveiling more as the days progress.

“As the 2021 season comes to an end, so will the partnership between two drivers who have charmed millions of fans with their personality, their humour and their commitment to racing, embodying the Alfa Romeo Racing Orlen spirit both on and off the track”

Say it in carbon: Alfa Romeo Racing ORLEN to feature livery message for Kimi and Antonio in Abu Dhabi 🤩 pic.twitter.com/jh3HYKkl0X