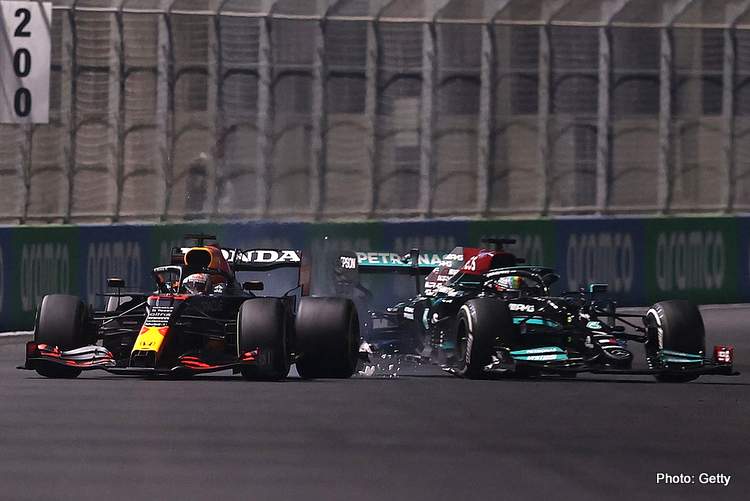 It’s hard to keep up with all the articles full of astonishing righteous indignation about the way Max Verstappen drove following the Saudi Arabian Grand Prix.

Indeed, Lewis Hamilton and Mercedes have cleverly used their platform to vilify the young Dutchman and have a large section of the media backing their claims.

It seems even the FIA and Michael Masi are starting to lap up the propaganda as well after Verstappen left Saudi Arabia with a 15-second time penalty, having also been asked twice to give Hamilton his position back on track, which is truly unprecedented.

It is certainly unfortunate that the narrative at the moment has developed into the skilled Hamilton having to evade the volatile Verstappen but it’s not altogether surprising. Indeed, Hamilton is an old hand at the mind games and knows how to work an angle after a decade and a half in Formula One.

If you need further proof of who the public see as the villain then check out the BBC sports personality of the year 2021 odds and you’ll notice Hamilton among the favourites to win the annual prize.

Of course, the 36-year-old may not be the outright favourite on the list of the sports personality of the year nominees 2021 but the point stands, Lewis is very much seen as a knight in shining armour and is up against a loose cannon that can’t be trusted.

Where to start? We finished 2nd, after an eventful race and a lot of things happened that I don’t fully agree with. I went for it on track and gave it my all. Thanks to all fans, for supporting me and voting me Driver Of The Day! On to Abu Dhabi #KeepPushing 🇸🇦 #SaudiArabianGP pic.twitter.com/5kV8083ebd

In reality, it’s a grossly unfair depiction of the driver that Verstappen is and a wholly unjust portrayal of the season that the 24-year-old has had. In short, it is nothing short of a miracle that Verstappen had made it to Abu Dhabi level on points with Hamilton who is driving a car that is, as Christian Horner says,’ unraceable.’

This is professional racing after all

Even Toto Wolff has said that Hamilton has a ‘rocket engine’ in his car and often refers to the unit as ‘spicy’. Wolff is of course trying to rattle his fellow Team Principal at Red Bull but in every joke, there is an air of sincerity and the inescapable truth is that Hamilton’s car is a great deal faster than Verstappen’s.

In essence, we only have a title race on our hands because Verstappen is an incredibly skilled driver who has had to use every inch of his talent to eke out every point he has earned this season. If we’re looking for an accurate narrative of the 2021 season, then that’s the one we should opt for.

On the brink of glory

To a kid with a dream; to the man who would be king#HistoryAwaits pic.twitter.com/pMMXgHxizY

Indeed, Hamilton is so used to lapping the competition in his mechanically superior supercar but now that there is a driver on the grid capable of outdriving him despite having a slower car, there is all of a sudden an uproar about the tactics that Verstappen is using.

Formula 1 should be aware that Vertsappen’s sensational manoeuvres behind the wheel are as much as part of the crest of the wave that the sport is riding as the popularity of Netflix’s Drive to Survive has brought.

This is professional racing after all and the uncomfortable reality is that it is an unforgiving sport that pushes people to the extreme.

Max Verstappen shouldn’t be chastised for using every advantage he can get in the bid to finish ahead of the most dominant car Formula 1 has ever seen.