Villeneuve: That wasn’t Formula 1, it was rental karting 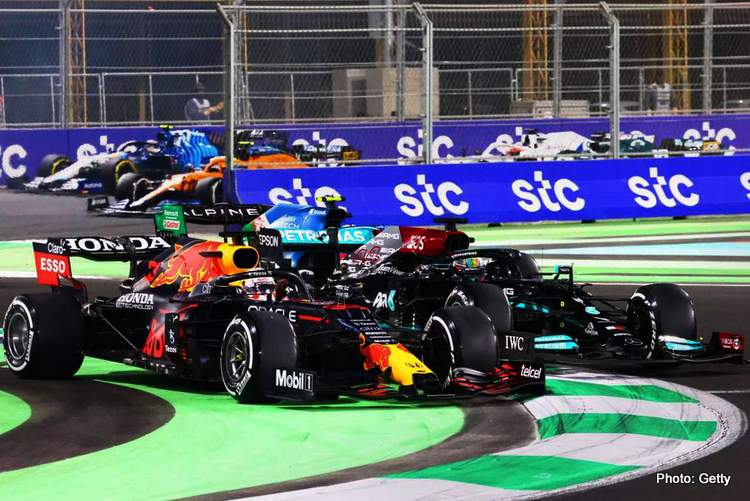 1997 Formula 1 World Champion Jacques Villeneuve was not impressed with the shenanigans between Title contenders Lewis Hamilton and Max Verstappen, and their respective teams Mercedes and Red Bull during an incident fraught and highly contentious Saudi Arabian Grand Prix.

The first race at the just ready, spanking new Jeddah International Circuit, a daunting venue if there ever was one, descended into near chaos as the contest between the two best drivers of this generation, for this year’s 2021 F1 World Championship Title, just got nastier and dirtier.

Villeneuve is no stranger to bruising battles as he went toe-to-toe with Michael Schumacher, arguably the most ruthless of them all; some of their on-track battles are now part of F1 folklore. Jerez 1997 is worth a google.

A pundit for Italian TV, Villeneuve speaking to Motorsport Network reflected on Sunday’s race night in Jeddah: “That wasn’t Formula 1, it was rental karting. Everything was wrong. So I’m not sure what to say.

We’re starting to get away from the sport, that’s all. So ultimately, it depends if you’re a purist or not

“And then when you see the team principals, everybody is shouting, and putting pressure even on the marshals and so on. It really has become ridiculous.

“It was great for the fans. So that probably will increase the viewership. Which is great for F1. But we’re starting to get away from the sport, that’s all. So ultimately, it depends if you’re a purist or not.”

Everyone has weighed in on the contentious moments between Hamilton and Verstappen during the incident-packed race.

Villeneuve gave his views: “Max did go off and gain an advantage. On the other hand, his front wheels were ahead of the rear wheels of Lewis. And in the rules it says if that happens, you have to give the right of way, which Lewis didn’t.

They all play these little tricks normally

“So which rule should you follow at that point? Would Max have cut the corner had Lewis left enough room or not? That we will never know. Ultimately, yes, Max cut the corner, he probably wasn’t going to make it anyway. But do you follow the rule to the letter or the intention? That’s when it becomes very difficult to stay neutral.

“They all play these little tricks normally. When Lewis does them, he does them in a way that there’s always the doubt whether he did it on purpose or not. It was the same way against Rosberg. When Rosberg did it, he got caught out and it looked dirty.

“When Lewis was doing it he didn’t do it on purpose, it’s clean. And he’s a master of that and he’s amazing at that, of course.”

As for the bizarre collision when Verstappen was ordered to cede the lead “strategically” after he went beyond track limits to gain an advantage, he slowed in the middle of the track which confused Hamilton, whose Mercedes clattered into the back of the Red Bull

They both played dumb before they collided on the straight

Villeneuve observed “Someone slows down in front of you, you overtake. The problem is those stupid DRS lines. And Lewis didn’t want to cross the DRS ahead of Max.

“He knew Max was letting him by. He just didn’t want them Max to have the DRS for the next straight line, because Max would have overtaken him, so they both played dumb there.

“I’m amazed at how strong that front wing is. Because it got banged twice and was still there. Wow, that’s impressive! But you could tell the frustration of Max with the Mercedes horsepower.

“This weekend Max just wasn’t there. Just with qualifying, he should have got pole and he lost it. So this weekend, Lewis deserved to win anyway.”

A deal being made? Never heard of that! It’s not in the rules

F1 TV producers bizarrely went live with conversations between Race Director Michael Masi and team strategists, at one point Masi seemed to be negotiating the penalty as opposed to enforcing it. There were hints of inexplicable laissez-faire vibe to officiating this weekend.

Villeneuve questioned Masi’s approach: “A deal being made? Never heard of that! It’s not in the rules. That one, I just I didn’t get it.”

“It’s a Red Bull track. But with the engine that Lewis has every track is a Lewis track now. I just hope we have a nice clean race. And may the best man win, and not anything like Sunday, not Hollywood, at least not in the last race.

“We already got our Hollywood hits this year,” declared Villeneuve.

This weekend’s Abu Dhabi Grand Prix will decide who has the honour to be called 2021 F1 World Champion, with Verstappen just ahead by virtue of one more win than Hamilton as they head to Yas Marina equal on 369.5 points.

Thus first of the contenders to cross the finish line on Sunday night will be King; Lewis for an eighth time and Max for his first.