Brawn: We don’t want the title to be decided by stewards 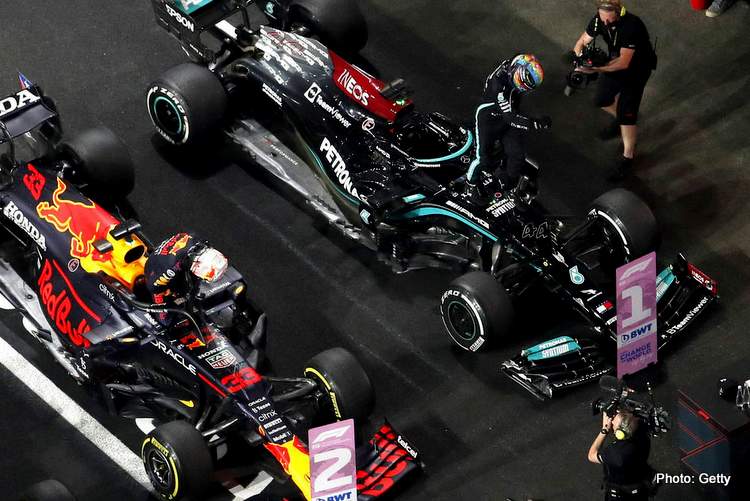 Formula 1 sporting chief Ross Brawn looks back on a controversy piled inaugural Saudi Arabian Grand Prix,  applauding those who made the race at Jeddah Corniche Circuit happen, while appealing for sense to prevail in the title duel between Lewis Hamilton and Max Verstappen.

The two contenders head to Abu Dhabi on equal points, as whoever crosses the Yas Marina finish line ahead of the other will win the race to be 2021 F1 World Champion. If they both DNF, Verstappen will take his first title by virtue of having won nine races to Hamiltons eight.

The stage for this mouth-watering finale was set last Sunday night over 50 floodlit laps, at a daunting new circuit that was made ready just in time for the free practice on Friday.

So much has been written over the past few days, that it is always fitting to hear what the bosses think of what went down between Max and Lewis on the night.

Reviewing the ‘Battle of Jeddah’ Brawn wrote in his post-race column on the official F1 website: “This sport has had everything this season – and it gave us even more on Sunday. So much intrigue, so much tension, so much fighting between the two main protagonists. It was just sensational.

“It’s been 47 years since we went into the last race with both contenders on the same points and I think everybody wants to see a fabulous contest in Abu Dhabi.”

It will be tough. Neither will give an inch, but we want a sporting competition

“It will be tough. Neither will give an inch, but we want a sporting competition. We don’t want to step over the line. We don’t want this championship to be decided by stewards’ decisions and to end up in the appeal courts or elsewhere, it must end up on the track in Abu Dhabi with the best driver winning.”

Stats back up Brawn as Hamilton has been unbeatable since he powered through the field to that famous victory in Brazil, repeating the feat in Qatar and now Jeddah where he won his 103rd Grand Prix and put himself level on points to Verstappen who, before Brazil, led by 19 points.

Brawn continued: “For me, Lewis gets this accolade this week. I think he did a better job. He kept a cool head in the heat of battle, he managed the race impressively, he didn’t make mistakes and he set the fastest lap with a car that had half the front wing hanging off.

It’s the season that keeps on giving says Brawn

FIA Race Director Michael Masi and his race stewards have been under fire this season, dealing with contentious actions by both drivers with a damned if you do or damned if you don’t environment, as two camps tend to emerge after such altercations, the Lewis Brigade and the Orange Army of Max both steadfastly loyal to their drivers.

Neutrals among F1 fans, relishing the battle on and off-track, at times having to make a stance as rules of engagement remain blurry. And the guy making the big calls – Masi – is not having an easy job of keeping Max and Lewis, and their feisty teams in check.

Brawn gave a shout out to F1’s much-maligned ‘referee’: “I’d like to compliment the FIA and Race Director Michael Masi in handling well what was an extremely difficult race. I know some people feel some of the decisions were controversial but I don’t.”

Of the penalty “negotiation” that has caused a stir, Brawn explained: “The situation you had with Max and Lewis at the restart when Michael recommended that Max drop behind Esteban and Lewis, was handled well as the alternative was to report him to the stewards and that could have ended up with a time penalty.

“I think Michael dealt with it pragmatically. This type of discussion goes on several times during a race. If a driver gets by someone or defends unfairly, the Race Director will tell the team to correct the position.

“Some people seem to think Michael was doing a deal. He wasn’t doing a deal. It was simple: you accept the decision of the Race Director, with a known outcome, or it gets passed to the stewards to handle it.

“It was a tricky race and a tricky weekend. We’ve had a lot of challenges here, and I think everyone – the FIA, F1 and the teams – has pulled together to make this event work and it’s been a huge success.”

The Jeddah track proved to be a huge challenge for drivers, a bit of Sochi, Baku and Monaco (on steroids) rolled into one. It is debatable if the track was really ready and really safe to host a race weekend with this caliber.

There was probably a collective sigh of relief for F1 when the chequered flag waved on Sunday night of plentiful damage (both Haas cars destroyed, lame Red Bull and many cars missing bits) but fortunately, no one was seriously hurt on a weekend where the sport pushed its luck.

As we predicted and as our simulations told us, you can overtake around Jeddah

Brawn acknowledged: “You are always a little apprehensive when you come to a new track, you don’t know how it will work. The Jeddah Corniche Circuit was certainly very testing and challenging. It took the drivers a little time to come to terms with it, but by the end of the weekend, they were complimenting the track.

“It was impressive how quickly this whole race was put together. It was done in a far shorter time than we’ve ever put a race together before. There were one or two rough edges that will be sorted out for the next race in March 2022. Inputs from all stakeholders will be considered and the track and venue will be honed for this next event.”

“It was non-stop action all the way through the field. As we predicted and as our simulations told us, you can overtake around Jeddah. I think some were sceptical when they saw the track but I’m really pleased that the simulations that were done have proved to be correct as we want to to rely more on them to make sure that track designs are great for racing and existing circuits can be assessed.

“It’s one of the first new circuits where we’ve made these tools available to the designers, the manufacturers and the FIA and it’s been a fabulous track.”

Thus the grand finale of an epic F1 season comes to a close this weekend in Abu Dhabi, the oft-boring track seriously altered to reduce lap times by around ten seconds they say, changes designed to improve racing.

“I’m looking forward to the finale in Abu Dhabi, too, as they have modified the track there, which I’m really pleased about as I think it will present a new challenge to the drivers.

“I think they are going to enjoy it a lot more. The simulations we have done show the new Abu Dhabi is a better racing track with more opportunities for overtaking. I’m keen to see what the drivers say about it.

“Make sure you’re glued to your seats next Sunday as this is going to be exciting,” predicted Brawn.