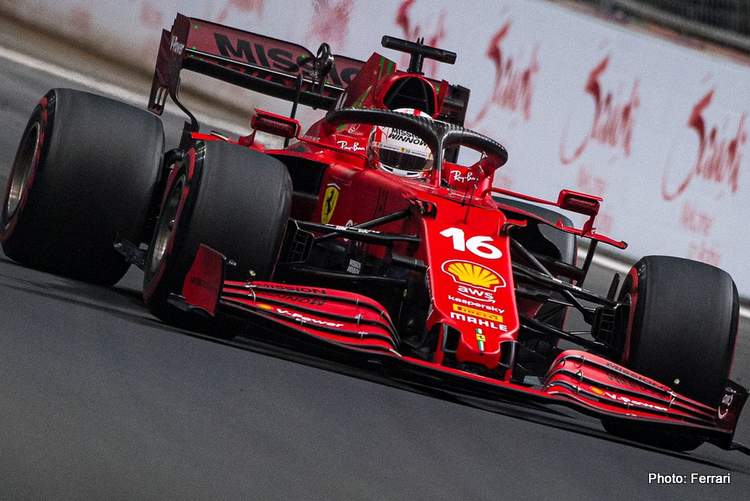 Charles Leclerc did himself and his team bo favours when pranged on Friday during practice for the inaugural Saudi Arabian Grand Prix, but the Ferrari driver reset, regained his confidence to put the car fourth in qualifying 24 hours later.

It was a good turnaround as the Ferrari continues to be a handful for their drivers when on the edge, and that’s where they have to drive to get the half-decent results they are getting. But still nowhere near the sharp end where the Reds should be plying their trade, not in the ‘second division’ of Formula 1 where they currently are.

Nevertheless fourth, in among the Red Bulls and Mercs, is a good show from Leclerc who said afterwards: “I’m a bit more than pretty happy. It’s only qualifying, and the race is tomorrow but after yesterday it was difficult to come back and just be confident in the car.

“I took it step-by-step and in that last lap in Q3 I just went for it, especially in Turn 22. I really thought I had lost the car, I caught it and I gained a lot of lap time compared to the lap before. I’m just really happy to start P4, and I hope we can maximise that result tomorrow in the race.”

“It’s going to be tricky. But our race pace looks strong and I’m optimistic,” added Leclerc, who lies sixth in the world championship standings 6.5 points ahead of teammate Carlos Sainz.

Sainz: And then when I look in my mirror, the endplate is completely bent

The Spaniard had looked strong in practice and expectations were high for him in qualy but a mistake late in Q2 on a hotlap led to spin, the Ferrari lightly tagging the wall with its rear-wing before, on another hotlap attempt, the car became undrivable. A good qualy went begging, he will start from 15th on the grid.

Sainz reflected: “It’s a bit of a shame, as I was coming from a very strong FP3, a very strong Q1 and suddenly this snap in the middle of Turn 11 cost me a whole qualifying as in the end, it meant I stabbed the wall with the rear end-plate, which I actually didn’t feel in the car.

“And then when I look in my mirror, the endplate is completely bent and the rear wing is not delivering the downforce it should,” he explained.

the brand new Jeddah Corniche Circuit provided interesting challenges for drivers and teams, the track gripped up considerably from the opening laps of Q1 to the final laps of the early session, getting tricker in Q2 and Q3.

Sainz continued: “It is something to analyse, something to look into what I could have done differently as it’s a snap of oversteer that I was not expecting. This corner has been flat for me for the whole of qualifying, and for some reason in that lap, I lost the rear, but we’ll look at it and come back from it.”

But there were positives for Sainz despite the lowly grid position: “Even with rear wing bent like it was, I was coming on a very strong lap before the rear wing properly gave up.

“Confidence has been there all weekend, it’s been there the last four weekends actually. I’ve been really strong in qualifying, Q1 here I was really strong so, one small bump in the road, but honestly, I feel comfortable,” insisted Sainz.

Ferrari have been embroiled in a battle for third place in the F1 constructors’ championship with old rivals McLaren. The Reds edging ahead in recent races to 39.5, which means they could seal third place at the ned of Sunday night in Jeddah.