Verstappen: Upset with myself but we have a good shot 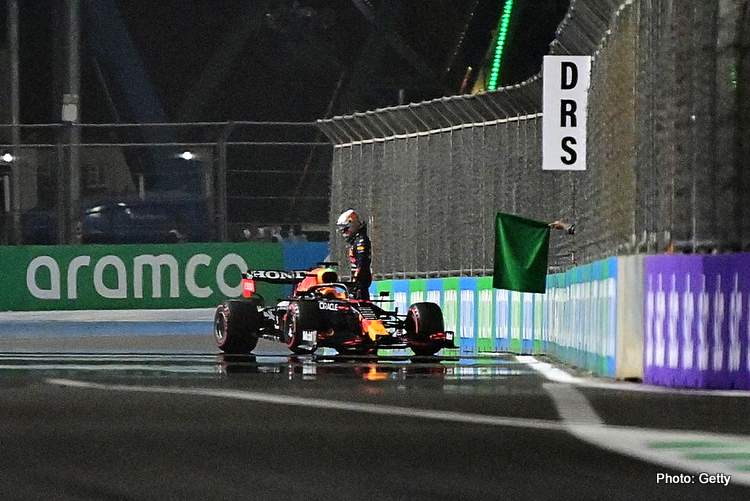 Max Verstappen did himself no favours crashing on the final corner of his final lap in qualifying for the inaugural Saudi Arabian Grand Prix, with pole very much on the cards he had to settle for third thanks to his earlier effort.

Verstappen was reportedly a couple of tenths better than Lewis Hamilton’s table-topping final effort after the first two sectors, but wanting to hammer home the advantage he overstepped it a tad too much, the Red Bull clattering into the wall with force and wobbling away wounded and perhaps in need of the type of fix that induces grid drop penalties.

The last thing The Dutchman can afford at this critical stage of the title race, with Hamilton only eight points adrift with these two final rounds remaining.

No matter what way you look at it, Verstappen botched it up badly on the night and knew it when he faced the cameras in parc ferme: “It was terrible… but in general, it was a good qualifying. It was a bit hard to switch on the tyres because it’s a street circuit but I knew the pace was there.

Verstappen: If we can follow, there should be some good opportunities

“I don’t really know what happened. I locked up, tried to keep the car on the track and finish the lap but I clipped the rear and had to stop. P3 is a bit disappointing but nevertheless, it shows that the car is quick and let’s see what we can do in the race.”

He reflected later in the team’s Saturday report: “I was on a really good lap until I lost it on the final corner, I thought I had approached it in the same way I had been doing all session, but I lost the rear.

“I’m upset with myself and it is, of course, disappointing but there are two races to go and anything can happen. We had a good car in qualifying and everything was coming together, which gives me hope going into the race, also knowing that the pace was there today.

“I hope we can follow well tomorrow and if that’s the case, there should be some good opportunities and we should have a good shot,” insisted the championship leader.

Perez: Today wasn’t an ideal day for us as a Team but tomorrow there is still a lot to play for

His Red Bull teammate Sergio Perez was shy half of Max’s best effort but good enough for fifth on the timesheets.

Unlike his teammate’s short and to the point reflections, Perez was more verbose in his explaining how he only just out-qualified AlphaTauri’s Pierre Gasly: “We were P1 in Q1 and Q2 and then in Q3 I don’t think the approach we took with the tyres was the right one.

“I suddenly picked up a lot of understeer and couldn’t match my Q2 time, which is a bit of a shame. These tyres are so picky that if you are not in the right temperature window then your balance is totally different and that is what happened to me today.

“It is a physically demanding track, it puts a lot of stress on your body and mentally it is challenging too to be up there session after session.

“Today wasn’t an ideal day for us as a Team but tomorrow there is still a lot to play for, it is going to be a long race and anything can happen still. I am looking forward to it, the pace was there and I really hope we can improve on our starting position and get into the podium positions very early on.

“We will see if starting on the clean side of the grid tomorrow is an advantage, I think the start is a good chance to overtake, then we will go from there and try to be in the mix with the leaders straight away,” added Perez.

Apart from Verstappen’s title quest on the table on Sunday, Red Bull are only five points adrift of Mercedes in the F1 constructors’ standings and will be looking to wipe that out asap.