Horner: That was looking like the lap of the year 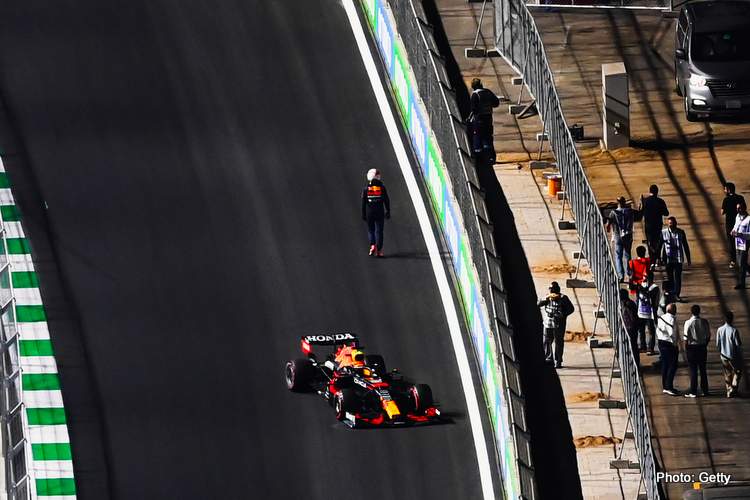 Max Verstappen denied himself and his fans “the lap of the year” during qualifying for the inaugural Saudi Arabian Grand Prix, the Red Bull driver crashing out on pole position with the finish line in sight.

Moments before his Red Bull clattered heavily into the wall exiting the final turn, he had been purple in the first two sectors, reportedly a couple of tenths faster than title rival Lewis Hamilton, who set the benchmark in the final Q3 run.

All that was needed was for Verstappen to cruise the final sector, but that’s not how Max races. Sensing a mauling it appears he wanted to stamp his authority around one of a potentially perilous track, make a point, but he stomped on the loud pedal a tad too hard; what might have been pole was third instead, plus the possibility of penalties, pending the amount of damage the mishap did to the car.

Verstappen leads the 2021 Formula 1 Championship Hamilton by eight points, but alarmingly the gap has come down from 19 points before Brazil to eight with two rounds to go. The Dutch ace needs to halt the rot.

Horner: Hopefully it’s not a gearbox penalty because that would be especially brutal

Red Bull boss Christian Horner told Sky F1: “That was looking like the lap of the year. It’s a great shame, he just grabbed the front into the last corner, he tried to keep the momentum… and unfortunately, he ran out of road.

“It’s pretty brutal. Let’s hope the gearbox isn’t broken. He’ll be frustrated, I’m sure. He knows what a good lap it was. He just needs to put that behind him. He knows what can still happen in the race.

“It was a mighty, mighty lap. We’re in the back foot here and he was pulling something very special out the bag. Hopefully, it’s not a gearbox penalty because that would be especially brutal,” added Horner.

Worst case scenario for Verstappen’s campaign would be grid penalties but if there is anyone who can turn this negative into a positive is he and his team. Indeed Mercedes do have the upperhand but Red Bull are used to that for almost a decade chasing their rivals.

Red Bull know how to beat Mercedes with an inferior car, so it is imaginable that they do the same here in Jeddah with a car which is equal or maybe even a little better than the Mercedes. For sure the RB16B is not worse than the W12.

While it is unfair to call out one failing or moment as the catalyst to losing the title, because it is actually a succession of many such events and incidents whereupon a championship is won or lost.

It has been said often enough by many pundits, us included, that this title will go to the guy who makes the least mistakes and it is fair to say that today’s unforced error will have done Verstappen’s title chances no favours as he embarks on another Sunday of damage limitation for the Dutch ace.