Hamilton: I’m more relaxed than I’ve ever been 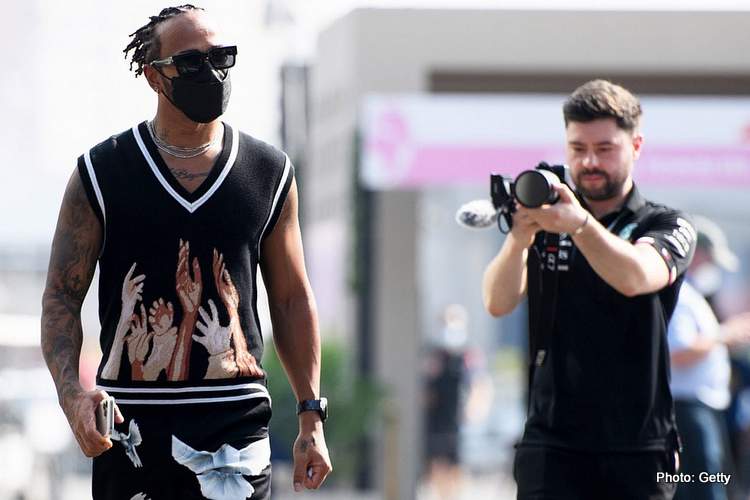 Michael Schumacher was still racing, and Lewis Hamilton only a one-time Formula 1 world champion, the last time rival teams took the title battle down to the last two rounds of the season.

Not since 2012, when Red Bull’s Sebastian Vettel faced Ferrari’s Fernando Alonso in a final race title-decider in Brazil, has there been a run-in like the one between Max Verstappen and Mercedes’ now seven times F1 world champion Hamilton.

But this one is different, with eras to be ended and F1 records beckoning.

“It’s different because we’ve got two incredibly close teams, it’s different because as a team we’re fighting for uncharted territory,” Hamilton told reporters on Thursday ahead of the season’s penultimate race and first in Saudi Arabia. “Nobody’s ever won eight titles in a row, team or driver.”

He continued: “I’m excited to be getting in the car, I’m very grateful we have these two races to fight it out. The team’s working as hard as it can, I feel great.”

As for a rival team taking the fight to Mercedes until the very end, something that has not occurred since 2014, Hamilton explained: “There’s a couple of bits that are different, in one sense because we’ve got two incredibly close teams. It’s different because we’re fighting for unchartered territory, no one has ever won eight drivers’ titles or teams’, so that’s new.

Lewis: I don’t believe I’ve gone to another level, I believe I’m just at a good level in general

“And then on the other side, I’m more relaxed than I’ve ever been. It’s not the first time; I remember how it was with my first championship and even my second and third, the sleepless nights, and all those sorts of things, whereas I’m a lot more sure about myself and I’ve applied myself like never before.

“I know I can’t change anything from the past but all I can do is prepare as best as I can for what’s ahead of me, and I 100% know I have.”

While the tattoo states on his back says ‘Still I Rise’, the World Champ plays down suggestions he has raised his game: “I don’t believe I’ve gone to another level, I believe I’m just at a good level in general. Maybe I tapped into something different in Brazil, that is just – maybe I haven’t been there before, I don’t know.

“I definitely have in my career before, been in those positions many, many times before. But I’d like to think I’ve been doing well all year; you are constantly learning, your surroundings, the car, how to work with the team, how to get more out of each member of the team.

As for the significance, to him, of an unprecedented eighth title, he said: “One being that again it’s something that no one’s ever done before.”

Mercedes have won the last seven F1 drivers’ and constructors’ championships but this year could break the sport’s longest period of domination by a single team and crown Verstappen for the first time.

Since 2012 the battle has gone the distance only twice and on both occasions it was between Hamilton and Mercedes teammate Nico Rosberg.

Verstappen needs to score 18 points more than Hamilton to end matters in Jeddah this weekend.

Otherwise, the battle between the 24-year-old challenger and 36-year-old defending champion, a rivalry reminiscent of that in the late 1980s and early 1990s between Ayrton Senna and Alain Prost, goes on to Abu Dhabi.

Mercedes can still make it eight constructors’ crowns in a row but they would need to score 40 points more than Red Bull for that to happen this weekend.

Hamilton is eight points behind Verstappen. A victory plus fastest lap in Jeddah for the Briton would see the pair go level on points if the Dutchman is second. Should they both fail to score in Abu Dhabi, Verstappen would take it on wins.

That would be closer even than 1984 when Austrian Niki Lauda took his third title by half a point from eventual four times champion Prost.

The 1964 battle between Ferrari’s John Surtees and BRM’s Graham Hill ended with the former as champion by a single point despite his fellow-Briton scoring more overall. In those days, only the six best results counted.

In 1988 Senna won the first of his three titles despite also scoring fewer points than McLaren teammate Prost, with only the best 11 results counting.

In 2010 there were four contenders all the way to the final race with Vettel coming through despite not having led the championship until then.

Hamilton was one of them and already a veteran of such cliffhangers, losing by a single point to Ferrari’s Kimi Raikkonen in the Briton’s 2007 debut season with McLaren. He took his first title in 2008 with a pass on the last corner of the last lap of the final race.

In total 14 championships since 1950 have been won at the penultimate round, most recently Jenson Button with Brawn GP in 2009, and 29 at the last race.

Five titles in a row were decided in the penultimate race from 1987-91. (Reporting by Alan Baldwin; Additional reporting by Agnes Carlier)