Ecclestone: Max as champion would be good for F1 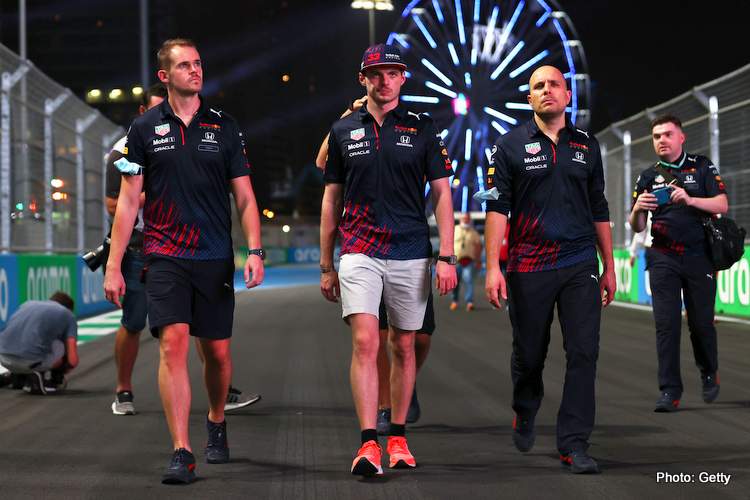 While he is far removed from the heat of the Formula 1 spotlight, former big boss Bernie Ecclestone still follows every Grand Prix on TV, watching everything including practice sessions and believes Max Verstappen is the people’s choice to be champion over Lewis Hamilton this season.

Thus no surprise the 91-year-old has opinions on the epic title fight between Red Bull’s Verstappen and Mercedes’ Hamilton, the Dutch driver eight points ahead in the 2021 F1 drivers’ standings, with Jeddah this weekend and Abu Dhabi the next remaining to run in this gruelling 22-round contest.

Speaking to the Daily Mail from his home in Ibiza, Ecclestone revealed: “I watch every practice and whatever is going on. Sky do an exceptional job. I keep in touch with a lot of the people involved.”

This year’s season has swung both ways frequently; two races ago Hamilton trailed by 19 points, but a surge in performance by driver and car saw him dominate in Brazil and Qatar, which has left their rivals at Red Bull scratching their heads.

What seemed like a Red Bull and Verstappen slam dunk for the title last month is now one that could get away from them.

Asked to predict who will be World Champion – Hamilton or Verstappen? – Ecclestone said: “It’s difficult to say who will prevail, I think it now depends on a little bit of good or bad luck that either of them bumps into.

“Generally the public, and this is nothing against Lewis he has done a first-class job, probably wants to see somebody else be world champion. That is the feeling I get from people. Lewis has been a bit luckier until now. Whether that luck will remain or run out we’ll have to see.

“Max as champion would be good for Formula 1. Mercedes have been great, but it would be good if someone else came to the fore. Max presents himself very, very well to the public. New kid on the block sort of thing, though he has been performing well for a few years but was largely unknown.

“People wonder if they will crash but if they do it won’t be intentional. It could happen but I don’t think either of them will do anything silly or drive in a way that could cause an accident.

“If it does happen it probably won’t be anything to do with them. That is what I am saying about luck and it could be the difference between being Champion or not. It’s been a good championship, what we have been waiting seven years for.

“That’s why I hope it goes to the wire and whoever is luckier is world champion in 2021,” declared Ecclestone.

Toto and Christian would tell as much truth as they believed

While the battle between Hamilton and Verstappen has been fierce and unrelenting, the same can be said about the off-track feud between their respective bosses Toto Wolff and Christian Horner. The pair lobbing grenades at one another as the battle for the title intensifies. The gloves are off in this intriguing sideshow.

Ecclestone weighed in with his assessment: “I think the problem is that Christian relies a little bit on facts. For example, the fact is that Mercedes have been much, much quicker on the straights than Red Bull in the last few weeks, especially in Brazil. Christian believes that it was due to the rear wing they were using. So it is either that or the engine power.”

Adding cheekily: “I can’t believe that it is the engine power. Because when they supply engines they have to guarantee to the teams they supply that it is the same engine they give them. That may not be true and what about the wing? Was it a little bit different from the regulations, I don’t know?

“Christian has believed those two things weren’t entirely correct. I think both of them would tell as much truth as they believed — or wanted to believe is true. I’ve always thought people have been as honest as they can afford to be. That is what a few years of experience has told me.”

If anyone has seen ‘them’ all first hand, it is Bernie whose interest in motorsport started with motorcycles shortly after World War 2. For a while, he dabbled in Formula 3 for the first time in 1949 as a driver, a year before the first official FIA F1 World Championship began.

I believe that Alain Prost was the best

He did not last long in the cockpit and realised he was better suited to the management and business side of the sport, and thus his journey off-track began as manager to Stuart Lewis-Evans and the rest, as they say, is well-documented history.

When asked who was the F1 GOAT emerged, Ecclestone replied: “It is very difficult to assess. Fangio had one-year contracts and could step out of different cars and jump into the best. It doesn’t make him any better or any worse than anyone else. It is just a matter of fact.

“I believe that Alain Prost was the best. He had to drive with a lot of difficult co-drivers and when the race started he was on his own and had to look after the tyres and everything else.

“These guys today are fortunate in that they get more information over the radio than they should — about their competitors, the use of the tyres and all of that.

“The drivers have their hand held by people in the team. There are times Lewis had information given to him about tyres, and overruled the advice.

“That is as it should be. It shouldn’t be down to information over the pit wall or, worse, in the factory in Italy or Britain. It should be him, or any of the drivers, deciding everything,” insisted Ecclestone.

We might as well make the regulations say: Don’t race!

While F1 has enjoyed a tremendously competitive and unpredictable 71st season, race stewards have too often been called in to make some crucial decisions that have not always gone down well with fans, while delays in rulings served only to inflame the situation and give rise to tensions.

Ecclestone noted: “I’m a bit disappointed in the way the races have been looked into by the authorities this season. All these instructions: Don’t go over the white line, don’t do this, don’t do that”.

“We might as well make the regulations say: Don’t race! I say that because when the lights go out, these guys have to race. Sometimes one of them will take more of a risk and that’s what makes racing interesting.

“Not going a little bit off the track — it makes hardly any difference because they all have the same opportunity to get an advantage.”

Ecclestone warned that the F1 season is too long, even longer next year, and dilutes the prestige of each Grand Prix: “The other thing that concerns me is the number of races we have. It detracts a lot of interest. People will decide what are the big six or eight races and glamorise them.

“The others will be forgotten. Buried, in fact. They are better off concentrating, as we had in the past, on 16 or 18 races rather than 22 or 23. They should be in the right areas of the world.

“The current bosses are doing the best they can under the circumstances. It is easy to have opinions and harder to carry things out.”

Among those “circumstances” is Hamilton’s social activism which he brings to the F1 stage. Ecclestone said of the seven-time F1 World Champion: “I haven’t spoken to Lewis for months. There’s nothing really that we have too much in common about that we want to discuss.

“I respect him and all the things he is trying to do, but he has to respect and believe that other people — and I am not just speaking about myself — have opinions. He can’t rely on the supposed fact that his opinion is the single opinion that people should look up to.”

One of the big criticisms Ecclestone faced towards the end of his tenure as the sport’s supremo was his reluctance to embrace the social media boom and explore new content delivery platforms such as YouTube, Twitter, Netflix and the like.

“People criticise me for not bringing Netflix in when I was looking after things,” continued Ecclestone: “There is one problem with that. It didn’t exist then. I spoke to Apple about doing a series but they didn’t want to at the time.

“People have told me Netflix is good but that some of it may be a bit manufactured. I get everything I need from Sky. They are 100 per cent brilliant and don’t do silly gimmicks,” explained Ecclestone.

A HUGE weekend coming up for championship leader @Max33Verstappen – so how’s he feeling?#SaudiArabianGP 🇸🇦 #F1 pic.twitter.com/uVFfhf4Lb9