Vettel: I think our car is a bit too draggy 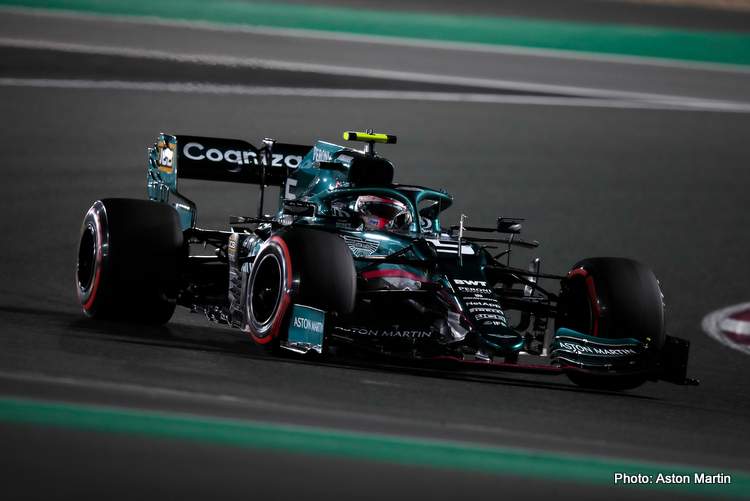 Quadruple Formula 1 World Champion Sebastian Vettel who moved to Aston Martin from Ferrari for the 2021 season, explained the difficulties he faced with his new car, claiming it is a bit too draggy.

The German who has been given a chance to resurrect his F1 career by Aston Martin, after being unceremoniously let go by Ferrari in 2020, has struggled for consistent form driving his new team’s car, the AMR21, or as he prefers to call it “Honey Ryder”.

The 2020 car built by the team in it’s previous incarnation as Racing Point, was “inspired” from the low-rake aero design philosophy adopted by World Champions Mercedes, and the team achieved a strong fourth in the 2020 Constructors” Standings, with the team’s former driver Sergio Perez winning the 2020 Sakhir Grand Prix.

The revised aero regulations targeting the F1 cars’ floors this year, have hurt cars with the low-rake concept, namely Mercedes and Aston Martin.

But as Mercedes managed to recover the lost performance, Aston Martin hasn’t and are currently seventh in the Constructors’ Table.

Aston Martin is not a super-efficient car

Speaking to Autosport, Vettel explained his struggled to deliver consistently in his 2021 ride, he said: “We had races where the race felt really good, we had other races where I struggled a lot.

“Overall, what matters is how competitive you are. In competitive terms, I think our car is a bit too draggy,” Vettel revealed.

“We are not having a super-efficient car, plus we don’t have enough downforce,” the German went on. “That I think is the main weakness.

“From there, it’s difficult to overcome that,” he admitted.

Vettel explained that proper tyre management with smart strategy was one of the methods they adopted to overcome the car’s aero shortcomings, but that wasn’t enough at all races.

“I think overall, when the car is in the window, then we can do a reasonable job and get into points.

“It’s first not always easy to get it into that window, and second, it’s extremely competitive in the area where we race.

“It seems like halfway through the season maybe other teams made a bit more progress than us now,” the winner of 53 grands prix lamented.

With F1 starting a new era in 2022, with a fully revamped set of aero regulations being introduced, with the hope delivering better racing, Vettel believes that they are entering into the unknown, while expressing confidence in his team.

“Obviously, the big unknown is for next year, what’s happening next year with the cars changing and so on, but we will only be able to answer that question next year,” he pointed out.

“But overall, the team I find is strong,” the 34-year-old insisted. “In terms of engineering and in terms of trackside, it’s strong.

“I think it’s growing at pace and lots of plans and good things are coming,” Vettel summed up.

“We have prepared for the track as much as we can, but there’s nothing like getting laps on the board.

“We’re aiming to score more points this weekend,” he concluded.

Vettel’s first season in British Racing Green has seen him reach high points like his two second places in Baku and Hungary, despite being stripped from the latter for a fuel irregularity on his car, but his results’ curve has been far from linear. He sits 12th in the Drivers’ Standings.