Norris: 2022 F1 cars not as nice to drive as current ones 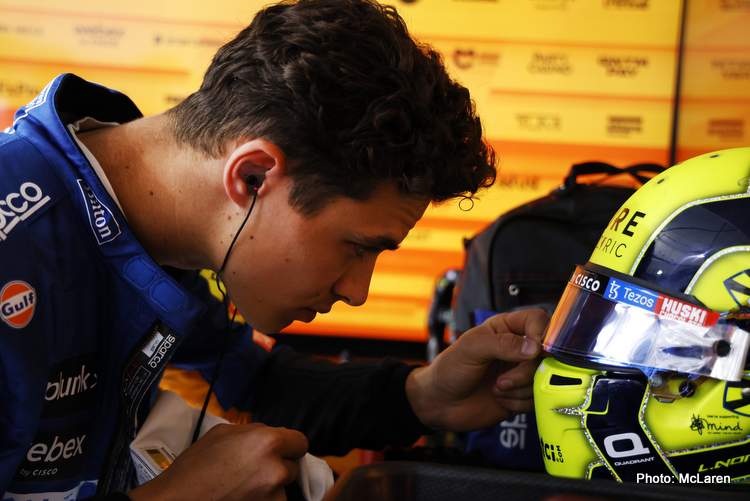 Lando Norris was one of the drivers that have already got a taste of how the 2022 Formula 1 cars will feel like, and according to the McLaren youngster, the new generation F1 cars will not be as nice to drive as the current ones.

Norris was giving his insight to Autosport on the highly anticipated new generation of F1 cars – that are the result of a sweeping change of aero regulations aimed at making close racing possible – having driven McLaren’s 2022 car in the team’s simulator.

“Definitely there will be a slightly different style,” said Norris, as he began to explain the difference between the current and next generation of F1 racing machines.

“A little bit like F2 in a way, I think, where you see more fighting the car and stuff.”

Norris could be wrong though

But with the new cars being at an early design stage, with teams still getting their heads around the new regulations trying to find loopholes, while optimizing their designs, Norris was cautious with his predictions.

“But I could be wrong because things are always changing,” he maintained.

Ground effect is a game changer

It is a well-known fact by now, that the 2022 F1 cars will rely on ground effect to generate downforce, which is a departure from the current concept that has been applied in the sport for years, and Norris believes, it is ground effect that is behind the drastic change in how the new cars feel.

“I think more because it is a ground effect car, rather than everything coming from the front and rear wing,” Norris explained.

“There’s also no mid deflector and all this crap that we have now. All of that is gone.

“So then that just changes a little bit the way the car feels and is to drive,” he went on. “And then how you have to set it up and stuff is also quite different.”

The Briton, however, is hopeful that the new regulations will deliver their target of having more closely raceable cars.

“Everything that they are doing for next year is because they want to try to make the cars better to race and so on,” the one-time polesitter said.

“But of course if there’s less dirty air while following, there is also less slipstream,” he pointed out.

“It’s like gaining in one area and then losing in another because they are quite related to each other.

Norris now heads to the inaugural Saudi Arabian Grand Prix in Jeddah this weekend, with his team McLaren greatly disadvantaged in the Constructors’ run to third against Ferrari.