Wolff: Both F1 titles are wide open, our mission is clear 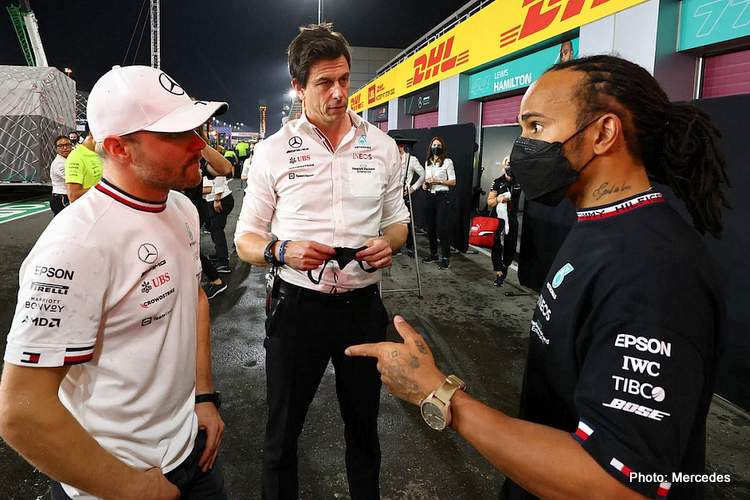 Mercedes boss Toto Wolff made no mention of Red Bull, their title rivals, in his preview of this weekend’s inaugural Saudi Arabian Grand Prix focussing on his team’s performance while paying tribute to Sir Frank Williams who passed this week.

Championship pressure, of the type the glorious 2021 Formula 1 season has witnessed, on Mercedes is relatively foreign to Wolff, although he does know what losing is about, his induction into F1 was with Williams – once Kings of F1 – were in freefall at the time of his arrival on the scene.

Thereafter his journey to become Mercedes team boss is well told, the titles have been non-stop since 2014, while just about every record related to team dominance has been shattered under Wolff’s watch..

If ever there was a true contest, then this is very much it and Wolff knows it: “Two races to go, and two Championships still to be decided. We are all excited to still be in the fight at this stage in the season, it’s a privilege and a testament to our resilience when we see where we stood in the early summer.

“Both titles are wide open, our mission is clear,” declared Wolff.

That mission is that for the last two rounds, of this gruelling 22-round season, Mercedes have to provide Lewis Hamilton all the ammo they can muster for a final attack on the eight points lead Red Bull’s Max Verstappen has, to turn it around by the time the lights go out in Abu Dhabi two weeks from now.

What his team can bring to the battle will determine whether Lewis becomes an eight times F1 World Champion or remains with seven titles.

Also on the line, and of course intrinsically part of the mission is an eighth consecutive F1 constructors’ championship; where currently they lead Red Bull by five points.

Since Brazil, Hamilton and Mercedes have been unbeatable, even when relegated to the back of the grid for the Sao Paulo Sprint Race and the next day starting the race from midpack, the #44 went on to crush everyone including Verstappen.

Then, to dominate a week later, at Losail, must have Red Bull very worried no matter what they say about having reduced the power deficit to the Black cars. The reality was that the Hamilton-W12-combo in Brazil and then Qatar looked mightier than ever.

Wolff acknowledged: “Last time out we saw a faultless drive by Lewis in Qatar, commanding the race from start to finish, and a strong recovery for Valtteri before the unfortunate puncture took him out of contention.

“The car has been performing well recently and is probably in the best place it has been all season, with the drivers confident to push it to the limit. That’s encouraging for the final races and gives us strong momentum to take forward.”

The Saudi Arabian Grand Prix is a journey into the unknown for teams and drivers this weekend, the track being completed in the countdown to the race.

Wolff expects the new track to suit the Mercedes: “Jeddah is another completely new challenge, an all-new track to get to grips with and a lot of work has gone on behind the scenes to ensure we hit the ground running on Friday because getting as much information as we can during those initial sessions will be vital.

“It’s a fast street circuit with long flat-out sections and several high-speed corners, lined by barriers meaning it’ll be high risk and reward. We’re more motivated than ever and we expect to be in the hunt, so we are all looking forward to the debut grand prix in Saudi Arabia.”

In closing, Wolff – who in 2009 bought a share in Williams – paid tribute to the late legendary team patron: “Just a few days ago we lost Sir Frank Williams. He will be in all our thoughts this weekend and we’ll try our best to deliver a performance that’s worthy of his racing spirit.”