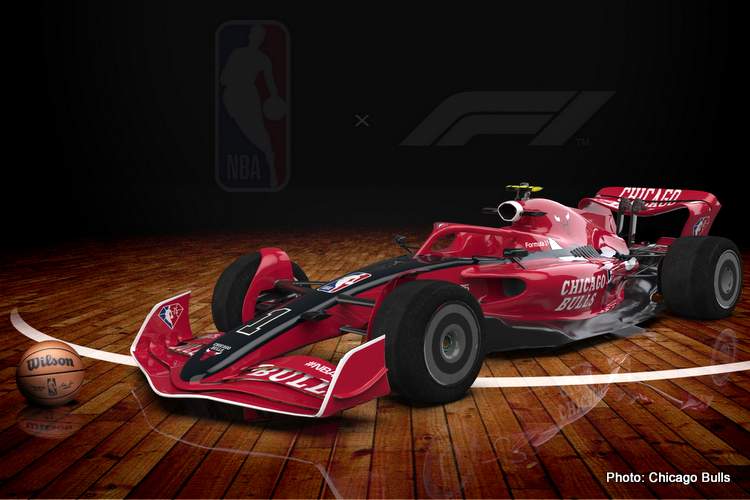 After the American company Liberty Media bought the Formula One Group for $4.4 billion back in 2017, we’ve seen new developments in the sport making it gain in popularity in North America.

The wider adaptation of F1 shows through its partnerships as the new shareholders are trying to create a bond with home-based sports just so it increases viewership in the region.

Formula 1 racing started back in 1950 and grew to become the most prestigious motor racing competition in the world.

That’s why it is fun to see when two big worlds collide, as the NBA and F1 with their new partnership that is first-of-its-kind. This content and promotion partnership is designed to bring together the two brands in celebration of the NBA’s 75th Anniversary season and the return of F1 o the United States.

This collaboration is responsible for such incredible exclusive imagery featuring F1 cars in custom liveries representing all 30 NBA teams that are already shared on NBA and F1 social channels around the world.

What The Partnership Involves?

This collision between two high-end sports is even deeper showing the similarities in terms of skills on both sides. F1 drivers are incredibly skilled, and one of the most elite athletes in the world. But can will they perform shooting hoops?

As a part of their collaboration, we’ve seen NBA champions like Saen Elliot, Dikembe Mutombo, and Fabrico Oberto in the paddock at the Circuit of the Americas to test out their driver’s skills with a $20,000 charity prize up for grabs.

After the F1 race in Circuit of the Americas, we got to see a hilarious trophy presentation by Shaquille O’Neal in a pimped-out car that was quickly taken over by the Red-Bull team that won the match.

It is tough for NBA athletes to fit in an F1 car since the cabins have small designs and such big people have a tough time getting in an actual F1 car.

To celebrate our return to the USA and the @NBA season tipping off this week, we decked out our 2022 cars in some team-inspired liveries! 🤩🏀

Which one is your favourite? More to come this week 👀#USGP 🇺🇸 #F1 #NBA #NBA75 pic.twitter.com/98Wddfcaq1

On the other hand, we got to see how F1 drivers compete in a free throw challenge. We’ve seen Gasly, Ricciardo, Perez, Russel, Verstappen, Kimi, Alonso, and many others that have learned a few skills from big NBA stars.

To be honest, they’ve might have scored a couple of free throws, but their shooting style is very weird. At least they are willing to participate in a partnership with one of the biggest sports in America and learn something new from NBA superstars.

In the end, it was the Aston Martin team that took the $20,000 charity reward for sinking nine out of their 20 free throws which doesn’t sound like a lot, but we are talking about F1 drivers. It seems like the four-time champion also has some basketball skills.

HAAS Team drivers Nikita Mazepin and Mick Schumacher also took part in the challenge and came out second and third place was secured for Scuderia AlphaTauri.

Drivers were participating in this challenge in a half-court ESPN studio, alongside ex NBA players like Chris Bosh, Sean Elliott, and Fabricio Oberto at the paddock at the Circuit of the Americas.

The connection between these two sports is much deeper despite the absence of F1 in the United States for years. We’ve seen many professional NBA players attending F1 races all around the world even getting pit passage.

On the other hand, we have many F1 players that love watching basketball games. We’ve seen that Hamilton and Steph Curry are friends and we’ve seen them playing golf together. We’ve also seen Leclerc on NBA matches and he is definitely a Spurs fan since he attended most of their matches and got photos with the NBA stars.

In the future, we will see a lot more collaborations of this kind which is a good thing since it brings athletes and fans from different worlds together.

It is a win-win situation where both organizations can get some extra fans and promote the sport to people who don’t watch it. And if you like NBA facts, click here to find out who are the tallest players ever in the basketball association.