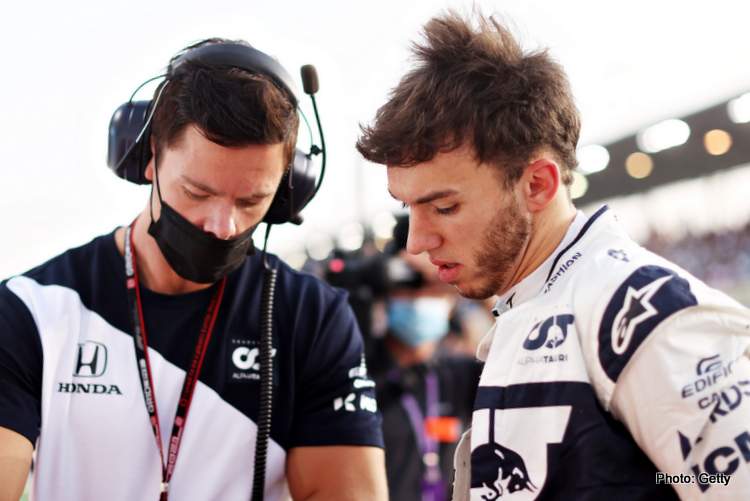 Pierre Gasly was confounded by the lack of race pace in his AlphaTauri after starting the inaugural Qatar Grand Prix on the front row, thanks to a stellar qualifying and some good fortune, but that’s as good as it got for him.

On Saturday, Gasly sparkled under the floodlights of Losail International Circuit, ending fourth fastest and bettering Sergio Perez in the Red Bull, the Frenchman second-best of the Honda-powered quartet.

But this is no surprise because Gasly has been one of the standout drivers of the season, often the wedge between the top two teams and the rest, popping up regularly at the sharp end of proceedings thus from second on the grid, thanks to penalties for Max Verstappen and Valtteri Bottas, expectations for a Baku-style podium were high.

But that is as good as it got, dropping down the order at a place per lap the pace simply not in the car that was so effective 24-hours earlier.

Speaking to reporters after the race, Gasly said: “It was very, very frustrating, our pace was shocking basically,” Gasly said in the written media pen in Qatar following the race.

“At the moment we don’t really have the answer. But we tried to stick with Fernando [Alonso] for the first few laps. I could barely make it, and then after that we tried to go for an aggressive two-stop strategy but the pace was never there.

“It was shocking. I tried to push as hard as I could in the car, and even with fresher tyres than Fernando, I was miles away when he was on used tyres. It was so frustrating.”

While pinpointing Gasly’s lack of pace in the immediate aftermath of the final triple-header (when all are just revving to get back home; post-mortems can wait) would be a tough ask, a clue might be required changes made after Saturday’s qualifying

“We need to review everything because I was even pushing really hard on the tyre, and the lap times were never there,” insisted Gasly, before adding that an alternate strategy would have made no difference: “We could have done five stops, [or] three, two, one, it doesn’t matter.

“Honestly, it was just our pace. We’re just too slow and even behind Seb [Vettel] I couldn’t pass him. I didn’t have the pace so it’s very, very frustrating.”

Gasly lies ninth in the championships standings and was clearly flummoxed after the race night in Qatar: “I don’t understand how both cars can qualify like that in the top 10 and have good pace, and both go backwards during the entire race and just not show any signs of speed.

“That’s the main thing. Obviously [it is] very frustrating when you see where the Alpines finished, but at the end of the day we just need to be objective with ourselves. They did a much better job than we did, and then yeah, we can just congratulate them,” concluded Gasly.