Hamilton: The car is feeling better than ever 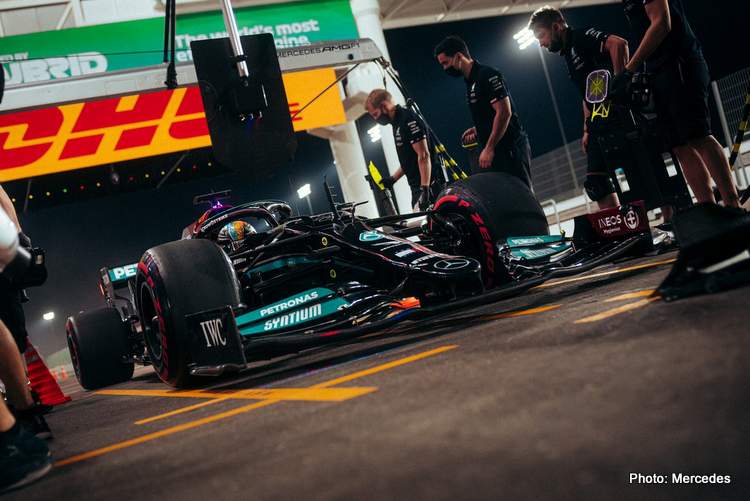 Lewis Hamilton has been on a run of dominance for two consecutive races now, winning in Sao Paulo against adversity, while the Qatar GP seemed like a cruise to the flag, with the Briton admitting his car, the Mercedes W12, is feeling better than ever.

The seven-time Formula 1 World Champion’s statement is backed up by his results, with his win in Brazil being one of his best to date, and the Qatar one a typical pre-2021 Hamilton show of dominance.

No upgrades for the W12 since Silverstone

Needless to say, the season’s start was slow for Hamilton and Mercedes, the team suffering from the new floor aero regulations implemented for this season, as Red Bull hit the ground running, their RB16B rapid out of the box.

And with the major regulation shakeup F1 is witnessing next year, teams were always trying to balance their development efforts on this year’s cars with the work that needs to be done on their drastically different 2022 challengers, with the balance becoming more critical as a team is embroiled in a title fight. Which is the case for Mercedes.

Hamilton spoke to the media after the race at Losail International Circuit, and shed some light on his team’s development work on his ride.

“I think, as the year’s gone on, we’ve understood the car more,” he began.

“[We’ve] definitely been able to squeeze more performance out of the package without bringing any upgrades – we’ve not had an upgrade since Silverstone.

“It’s been quite phenomenal to see the small bits and the increments that we’ve been improving.”

That Mercedes was suffering reliability on the power unit front this year was no secret, with Hamilton receiving two extra Internal Combustion Engines in Turkey and Brazil, and suffering the consequent grid penalties.

The new engine he used in Brazil was dubbed a “rocket engine” by Red Bull’s Helmut Marko, with Hamilton making the best use of it win on Sunday’s Grand Prix overcoming engine penalties and a qualifying disqualification for a DRS irregularity on his Mercedes.

Nevertheless, the 102-time winner’s car was blisteringly fast in Sao Paulo, and despite not using the same “rocket engine” in Qatar remained competitive, as Red Bull’s RB16B has finally met its match.

“It’s very close between the two cars clearly, so I think that lines us up for a great battle,” Hamilton pointed out.

“In these last two [races], I think we’ve just been able to do a better job overall,” he went on. “And I hope that we can take this form into the next two.”

The Mercedes ace, targeting a record breaking eighth F1 Driver’s Crown this year, one more the German Legend Michael Schumacher, said on several occasions that he was not totally over his Covid-19 infection from last year, which made him skip the Sakhir Grand Prix in Bahrain, where his future teammate George Russell was called in by Mercedes to deputize for him.

But Hamilton’s lingering Covid effects are a thing of the past now, the 36-year-old saying: “I feel great, I feel in the best shape physically that I’ve been all year.

“Obviously at the beginning of the year, [I was] not particularly that well. [But] I feel great [and] the car is feeling better than ever.

“I feel positive going into these next couple of races,” he revealed.

“I think they should be quite good for our car, so I’m looking forward to that battle,” Hamilton, who now lies second in the Drivers’ Standings 8 points behind title rival Max Verstappen.

With the current situation, it is all to play for with regards to the title, with two races remaining this season, Saudi Arabia and Abu Dhabi.