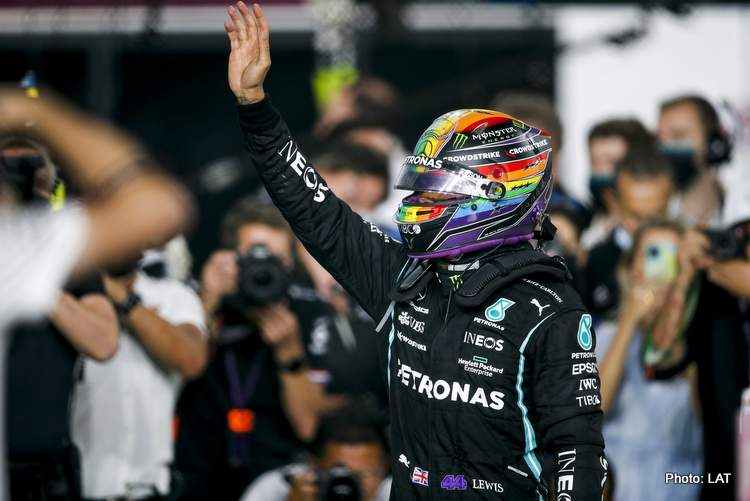 Mika Hakkinen, looked back on the 2021 Qatar Grand Prix, where Lewis Hamilton was victorious, with Max Verstappen chasing in second, the Finn saying it was ‘advantage Hamilton’.

The two-time Formula 1 World Champion reflected in his Unibet column, on the state of affairs in this year’s Title fight, as the season closes to a conclusion, with two races remaining, and Hamilton hitting hard in Brazil and Qatar.

Hakkinen wrote: “IF Formula 1 was a tennis match I would say that it was ‘advantage Hamilton’ following his dominant wins in Brazil and Qatar.

“Although Max Verstappen leads the World Championship by 8 points, Mercedes has responded by giving Lewis Hamilton a car with which he can really fight to defend his title.

“On Sunday Lewis was totally in control following his strong qualifying performance,” he went on. “His Mercedes did not have same straight-line speed advantage he enjoyed in Brazil, when he took a new engine, but through Qatar’s sweeping curves his car had a clear advantage over his Red Bull-Honda rival.”

Max on the backfoot this time

Whereas Hamilton suffered from a disqualification and grid penalties in Brazil, the tide turned in Qatar, with Verstappen being on the receiving end.

“After the dramas in Brazil it was Max’s turns to take a grid penalty in Qatar as a result of failing to slow down for a double-yellow flag – one of Formula 1’s most important safely rules which requires drivers to slow down and be prepared to stop,” Hakkinen said.

“Just like Lewis did in Brazil, Max recovered quickly in the race, moving into 4th place on the first lap,” he pointed out, admitting that: “The world championship rivals were on another level, the competition far behind.

“It was interesting to see Pierre Gasly help Max to gain another position,” the 53-year-old revealed.

“It’s sometimes easy to forget that Red Bull owns two Formula 1 teams and, with the championship at stake, we should not be surprised that Red Bull Racing and Alpha Tauri are going to work together when the need arises.”

But regardless of the assistance Verstappen might have received from Gasly ang AlphTauri, Hamilton was out of reach on the day.

“Max pushed hard, but Lewis was already 4 seconds ahead when the Red Bull driver moved into 2nd position,” Hakkinen explained.

“This really was a controlled performance from Lewis, and he covered off any attempt by Red Bull to put his strategy under pressure,” he insisted.

It is a sporting war

With Red Bull and Mercedes fighting over almost anything, Red Bull doubting the legality of their rivals’ car, with the latter requesting reviews regarding Verstappen’s on track actions against Hamilton in Brazil, the Flying Finn simply admits, it’s war.

“In my opinion we are seeing a sporting war between Mercedes and Red Bull,” he said. “It’s a battle between Lewis and Max, team bosses Toto Wolff and Christian Horner, and the 2000 people who work for them.

“We have already seen some tense moments and I know we will see some more,” the 20-time-winner claimed, who was sympathetic towards the FIA, who are stuck policing the actions of the title contenders and their respective teams.

“In the middle comes the FIA with an incredibly tough job to do,” Hakkinen pointed out. “They made some difficult decisions in Brazil and they had to do the same in Qatar.

“What it shows is that the officials are trying hard to take a balanced approach, to let the drivers race but also to make everyone remember that the rules have to be followed.

“Otherwise we have chaos,” the ex-McLaren racer warned.

Some nice words for Fernando Alonso

Hakkinen hailed fellow double World Champion Fernando Alonso, who on Sunday in Qatar, achieved his first podium since his return to F1 in 2021.

“It was brilliant to see Fernando Alonso finish on the podium for Alpine,” he said. “He started racing in Formula 1 18 months after I retired, and his first podium was over 18 years ago!

“Congratulations to him for keeping the focus, fitness and passion to race at this level for so long.

“Once again Fernando showed his great skill at the start of the race, taking advantage of a good grid position following the penalties awarded to Max and Valtteri Bottas in the second Mercedes,” the Finn explained.

“I thought his move around the outside of Pierre Gasly on lap 1 showed all his years of experience and the confidence that brings. It was liked ‘old times’ to see Hamilton-Alonso on the leader board.”

This is what it means!
Team work, El Plan, everything! Olé olé olé @alo_oficial! #QatarGP pic.twitter.com/sqwkFf6RKJ

Looking ahead to the coming races in Saudi Arabia and Abu Dhabi, Hakkinen wrote: “Both championships could swing either way.

“Max could even win the World Championship in Jeddah if Lewis has a bad result,” he said. “But on a circuit that seems to favour cars with good straight line speed, and Mercedes planning to use the ‘Brazil engine’ in Lewis’s car, the defending champion will be looking for nothing less than a win.

“If Lewis wins again in Saudi Arabia and sets fastest lap, with Max finishing 2nd – a strong possibility – the two drivers would go to the final round of the World Championship in equal points.

“It would be an extraordinary end to what has been an amazingly close season,” the holder of 26 F1 pole positions concluded.