Verstappen: We need to stay focused 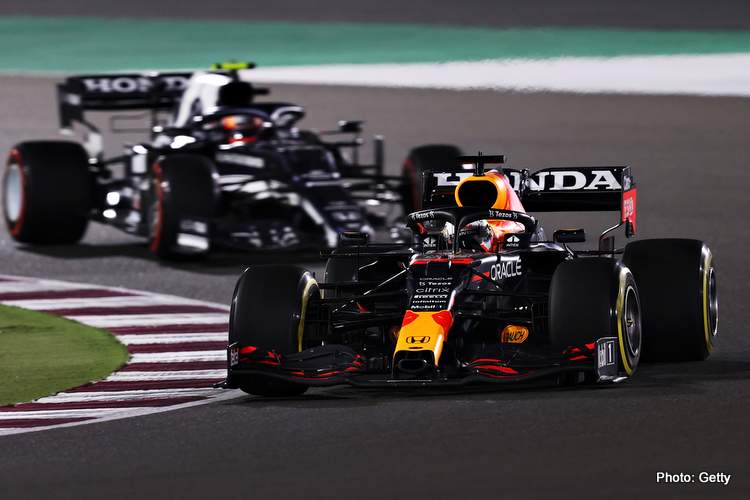 The 2021 Qatar Grand Prix was simply that of damage limitation for Max Verstappen, who had to settle for second place as his title rival Lewis Hamilton took a dominant victory, as the Dutchman calls upon his team to stay focused.

Verstappen and Red Bull struggled throughout the weekend for pace, as Mercedes stomped their authority around the Losail International Circuit, with Hamilton taking a dominant pole over four-tenths clear of the Dutchman.

To make things worse, Verstappen was slapped with a five-place grid penalty for the race, for ignoring double yellow flags waved after Pierre Gasly’s off-track excursion.

Thus the Formula 1 Championship leader started the race down from seventh, but a super launch saw him in fourth place after Turn 1, and was second behind Hamilton by lap 6.

A good launch, and the fastest lap

But that was as good as things could get for the Red Bull ace, who could not get close to the #44 Mercedes, enough to make the undercut work, and his consolation would be registering the fastest lap of the race, bagging the extra point that comes with it.

“I’m of course happy with the result today,” Verstappen said after in Red Bull’s press release.

“This weekend has been quite difficult for us as a Team and we are still lacking pace, I tried everything I could after the five-place grid penalty so to finish in second and score the fastest lap is really good.

“I had an exciting start and I knew that the first few laps were really important, I had a good launch and I was fairly quickly back into second place, from there I tried to keep the gap small and that worked out quite well.

“I had fun today, especially when going for the fastest lap,” the 24-year-old revealed. “It’s a shame that Checo didn’t make it to the podium today, he scored good points for the Team.

“I’m also happy for Fernando, we all know how good he is, there’s no doubt about that,” Verstappen said, paying tribute the double World Champion, who scored his first podium since his return to F1 at the start of this season.

“For now, we need to stay focussed, there are still two races left to go and a lot of things can happen, anything is possible,” the 19-time winner concluded.

A tough one for Checo Perez

Sergio Perez in the other Red Bull, had a tough mission up the grid after qualifying as low as 11th on Saturday, and was playing catch up all race long, and was only good for fourth once the chequered flag was waved.

“We managed to recover from qualifying and moved through the grid quickly from P11, we were in a very good position to be on the podium but unfortunately it didn’t work out,” he said in the team’s media brief.

“It was a very exhausting race, I was flat out the whole time, overtaking and pushing.

“We were changing our strategy throughout the race; at some stages, we were going for one-stop and at others two, but others’ tyres were exploding so we had to protect ours to prevent getting a puncture and maximise our position in the Constructor’s Championship,” the Mexican explained.

“I think we had the podium in our pocket but for the second week running a virtual safety car has potentially cost us.

“I don’t know if without it we would have definitely caught up with Fernando, but we would have been close. It is a bit of a shame but we managed to minimise the damage from Saturday and Valtteri didn’t score any points which is a big benefit to us,” the two-time race winner lamented.

“Ultimately, I think from a Team point of view we had to play it safe with the constructors in mind.

“Where we have finished today is a good result for the Team and the longer-term picture, we just have to keep pushing hard and improve our performance in the next two races.

“Now I am looking forward to Saudi Arabia and Abu Dhabi because we are going to give it everything, we have a big chance to come on top of the Constructor’s Championship, there is five points in it, it’s all to play for and that is the target,” the 31-year-old concluded.

With the race in Qatar done and dusted, Verstappen saw his lead over Hamilton in the Drivers’ Championship slashed down to eight points, as Red Bull closed in on Mercedes to within 5 points in the Constructors’.

Next up in a fortnight are the Saudi Arabia followed a week after by the Abu Dhabi Grands prix. (Follow me on Twitter @MallakJad)