Norris: It wasn’t an easy P6 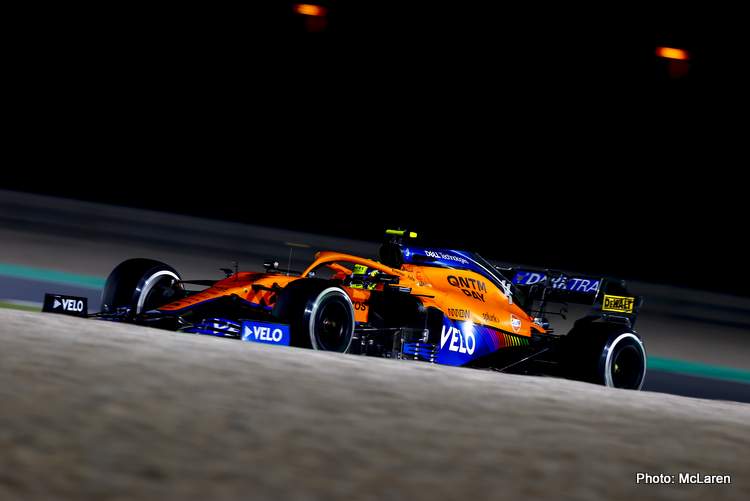 McLaren had a bittersweet qualifying session for the 2021 Qatar Grand Prix, as Lando Norris qualified sixth while Daniel Ricciardo was 14th fastest, with Norris admitting it wasn’t an easy P6 to achieve.

Norris’ result was even more important, as he outqualified the Ferrari of Carlos Sainz who was seventh, and maybe facing a grid penalty for ignoring yellow flags during qualifying.

“Very happy with today,” Norris declared in the team’s press release after qualifying. “We made a good amount of improvement from FP3 into qualifying and we weren’t expecting P6.

“I’m definitely pleased with that, especially because it wasn’t an easy P6, but it was done with probably one of the best laps I’ve done in qualifying for quite a long time.

“I’m satisfied with my job and what we did as a team as well,” the Briton went on. “That helped us out today. So, a positive day overall.

“We didn’t get through on the Medium tyre, which is the only negative – that’s going to make our life a little more tricky than we want tomorrow, but we still have a good opportunity to score some solid points,” Norris concluded.

The curtain falls on a mixed Qualifying for the team at the #QatarGP. 🇶🇦

The Australian must be kicking himself, as on a day when Charles Leclerc qualified only 13th, outqualifying the Monegasque would have boosted his team’s chances in their fight for third in the Formula 1 Constructors’ Standings against the Red team, a fight they are losing at the moment.

“Obviously not a great session in terms of position,” Ricciardo admitted in McLaren’s media brief. “I’d have loved to have been more competitive, but I just struggled to find those last few tenths.

“It felt like if I tried to find it, I’d gain a little bit here, but lose it in the next part of the corner,” he explained. “I got to a little bit of a stalemate with where I could improve.

“So, still some things to look at and work on and see where the time is. I think it’s just a little bit everywhere.

“No big mistakes or errors, just lacking that extra half-a-tenth in some corners,” the Aussie revealed. “We’ll try to do something tomorrow from where we are.

“We’ve got strategy choice, but obviously we’re quite a long way out.

“We’ll see what we can come up with tonight,” the eight-time race winner concluded.

McLaren’s Team Principal Andreas Seidl said: “Mixed feelings after our first qualifying session at Losail with P6 and P14 on the grid.

“Lando managed to improve run-by-run through qualifying, nailing the final lap which gave us a good P6 to start the race from tomorrow.

“Unfortunately, on Daniel’s side we couldn’t manage to find that last tenth in Q2, which meant P14 for him,” the German lamented.

“We’ll work up different strategies for both drivers to advance in what promises to be an exciting first Formula 1 race here in Qatar,” Seidl concluded.

McLaren are currently in the back foot in their fight with Ferrari for third in the Constructors’ Championship, currently behind their old-time rivals by 30.5 points. (Follow me on Twitter @Mallak Jad)