Hamilton: Bringing our triple A-game for the last races 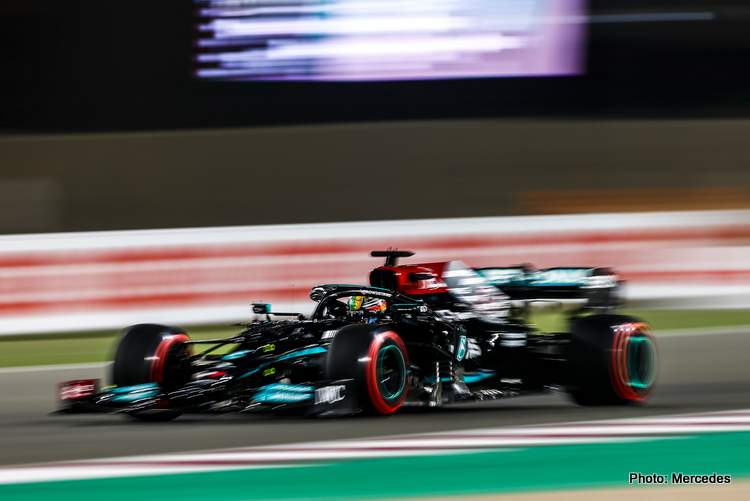 Lewis Hamilton took a commanding victory at the inaugural 2021 Qatar Grand Prix, reducing his deficit in the Formula 1 Drivers’ Championship to title rival Max Verstappen, then warned rivals Mercedes will be taking their “triple a-game” to the last two races.

The Briton delivered a brilliant pole lap on Saturday, as Verstappen was second, but a last minute grid penalty for the Dutchman meant he started the race in seventh, relieving his title rival from considerable pressure.

Nevertheless, Hamilton drove a calculated race keeping Verstappen, who was right behind him in second from lap 6 onwards, at bay controlling his pace along with a proper team strategy, netting him 25-championship point as his gap to the Championship leader currently sits at eight points.

An ominous warning from the Champ

“It’s been a hell of a year so to be at this point of the season and have back-to-back wins is a great feeling,” Hamilton said in the team’s press release.

“It was a pretty straight forward race for me, a little bit lonely but of course, we needed those points, so a really solid job by the team.

“A big thank you to everyone trackside and back at the factories for all their hard work,” the Briton went on. “I’m really grateful for these points and it’s amazing to be able to close the gap so much in the last two weeks.

“We’ve still got our work cut out, but we’re loving such a close battle and the challenge that it brings,” the seven-time World Champion revealed.

“It was a real shame for Valtteri today, having to retire, but the pace was good this weekend and that puts us in good stead for the next two races.

“We’ll be bringing our triple a-game for those,” the winner of 102 grands prix vowed.

Misery for the wingman

Valtteri Bottas had a race to forget, as he lost places after starting fifth due to his penalty, and then had a puncture for abusing his Medium tyres, which meant he was toiling out of the points towards the end of the race before Mercedes retired his car.

“Obviously, that was a very disappointing day for me and a tough way to end the weekend, after it started so promisingly on Friday,” Bottas lamented.

“I struggled on the formation lap to get temperature into the tyres and then being on the dirty side of the grid, I had no grip for the start, so I was just wheel spinning, and was skating around on the first lap.

“Then I got into a bit of a DRS train but once the gaps opened up, I could make progress, the pace was good, and I could go long on the stint,” the Finn went on.

“But then, all of a sudden, I had the puncture without any vibration or warning. We knew we were pushing the limit of the tyre, but I was still getting good grip, we still felt comfortable and staying out was our best shot at a podium.

“It failed just after the pit entry as well, so the most unlucky part of the track, and the car got so damaged on the lap back to the pits we felt it was safer to retire and save the mileage,” Bottas concluded.

Bottas’ DNF means that Red Bull have closed the gap to Mercedes in the Constructors’ Standings to only five points, whereas Hamilton has closed in on Verstappen and trails him by only eight points.