Alonso: I’ve had to wait seven years since my last podium 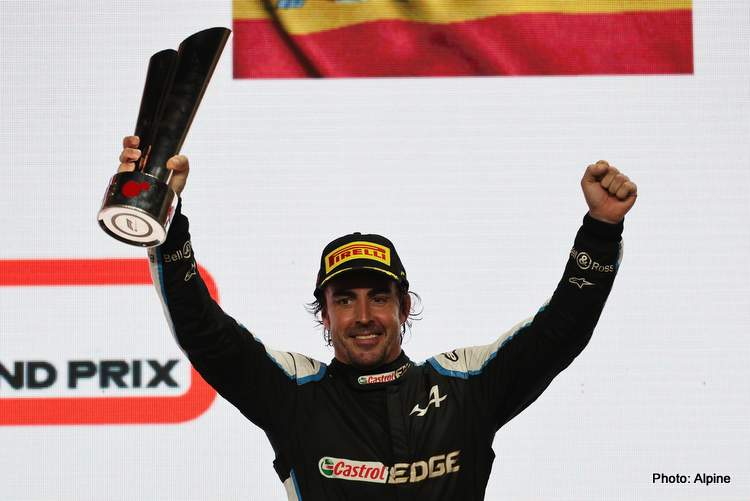 Double Formula 1 Champion Fernando Alonso scored a deserved third place at the 2021 Qatar Grand Prix , his podium being seven years in the waiting.

Alonso was solid in Qatar from the start of the weekend and topped that with a great qualifying performance, putting his Alpine fifth, which turned into third, as  Max Verstappen and Valtteri Bottas were handed grid penalties for ignoring yellow flags during Q3.

Also Driver of the Day!

The Spaniard delivered one of his signature race starts, beating Pierre Gasly into second, which he later lost to a rampant Verstappen, but then after drove a well judged race making a one stop strategy work, albeit aided by a late Virtual Safety Car deployed to remove the stricken Williams of Nicholas Latifi due to tyre puncture, as the Pirelli’s fell foul to the kurbs of the Losail International Circuit.

“It felt fantastic today and to be back on the podium was so good,” Alonso said in Alpine’s press release after the race.

“We deserved this result as a team and I’ve had to wait seven years since my last one. Hopefully we don’t need to wait this long again!

“We took some risks with the one-stop strategy but it worked out well,” the Spaniard explained. “We had some strong pace and despite Perez catching us at the end we did enough to hang on.”

Alonso paid tribute the his teammate Esteban Ocon and the whole team for the result in Qatar.

“Esteban did a great job in assisting the result and our pitstops were brilliant, so well done to the whole team,” he declared.

“I love this track and the car felt amazing all weekend, so I can’t wait to come back here. There was also quite a lot of action and overtakes, which is something we weren’t sure of at the start of the weekend.

“In the end, it was a perfect weekend for us and we scored lots of points in the Constructors’ Championship, so now we have a good advantage over Alpha Tauri heading into the final two races,” the 40-year-old concluded.

Alonso who currently sits tenth in the Drivers’ Standings, received the extra reward of being the fan favorite on the day, as he was voted “Driver of the Day”.

A good points haul for Alpine

Ocon was a strong fifth in the race in the sister Alpine, making it a strong point-scoring-weekend for Alpine, who have struggled to maintain a consistency in their performances over the 2021 season.

“Today was a great race on our side and I am very pleased to have finished fifth after starting ninth,” Ocon said.

“I managed to pass Carlos [Sainz] and Yuki [Tsunoda] after a good start.

“I tried to return the favour to Fernando from Budapest; I asked the team if they needed me to defend from Perez,” the Frenchman said, referring to his win in Hungary, where Alonso’s staunch defense on Lewis Hamilton, prevented the Briton from catching him before the end of the race.

“He was on fresh tyres and it was not easy, but I did the maximum I could,” the 25-year-old pointed out. “Today’s result is almost like a win for us.

“Everyone in the team deserves credit for this fantastic effort. Twenty-five points’ gain over Alpha Tauri sets us up very well for the final two races of the year!” Ocon concluded.

The 25 points that Alpine bagged in Qatar made up the gap they now have over AlphaTauri in the Constructors’ Standings, as they seem to have a good shot of securing fifth with two races to go. (Follow me on Twitter @MallakJad)