Verstappen: I wish we could have fought for more 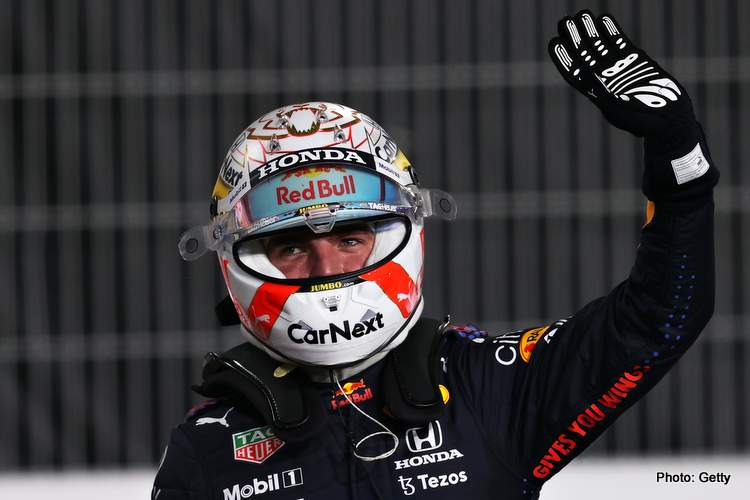 At Losail, which became the 76th circuit to hold a Grand Prix, the World Champions had Red Bull playing catch up at the sweeping desert-laid grippy tarmac, which has Mercedes-circuit written all over it.

Thus no surprise Verstappen, leading the championship by 14 points with three rounds to go, ended the session 0.445s off Hamilton’s stunning pole-winning lap.

Worth noting is that Verstappen got unlucky during his second flyer while others did not get a chance of one, due to a puncture on Pierre Gasly’s AlphaTauri in the dying moments of the session. Thus that four-tenths gap does flatter the World Champ’s effort a little.

Although no way was Max going to get pole position from the #44 car, the deficit was probably around a quarter of a second to that top spot on the night.

Nevertheless, the Red Bull driver will start from second, and the long drag to Turn 1 could play in his favour as it did in Mexico, when he ambushed the Mercs into and through that far away first turn.

After the session in parc ferme, Verstappen summed up his evening at Losail: “Just lacking a bit of pace. It’s been just a bit more tricky for us again in qualifying. Checo is not even in Q3 so it definitely shows we are struggling a bit more than normal. But nevertheless, it’s still second, so it’s all to play for.

“But I wish we could have fought for more,” added Verstappen, who will no doubt be hoping he won’t be saying that after the race on Sunday.

Verstappen: We’ve not done a race here, so there are a lot of unknowns

As mentioned, the start will be crucial. Thereafter, if Verstappen can nip ahead on the opening lap, anything can happen as the venue has never been raced on by F1, which throws up a batch of unfamiliar variables that will no doubt impact the race.

On the flip side, should he have to tuck in behind Hamilton, Red Bull will have strategy options to play with, however, the last thing their driver needs, is to be behind both Black cars as they emerge out of Turn 1, which is what their objective will be by using Bottas as a buffer.

The facts are that when the lights go out, he will face-off to both Mercedes in the drag to Turn 1.

While Hamilton has his wingman Valtteri Bottas starting behind him from third on the grid, Verstappen’s teammate Sergio Perez had a woeful session, failing to make it into Q3.

The Dutchman will have to go this one solo, as he is so accustomed to because his teammates are simply lacking relative to the incredible pace he can muster from the RB16B and its predecessors, for that matter.

“We’ve not done a race here, so there are a lot of unknowns, I don’t think about it much, focus on the start, we’ll see from there. We’ll focus on the race in general,” concluded Verstappen ahead of Round 20 of this year’s F1 World Championship.

Nice work @Max33Verstappen 👏 On the front row for the #QatarGP 🇶🇦 pic.twitter.com/gyBhcxW7MD