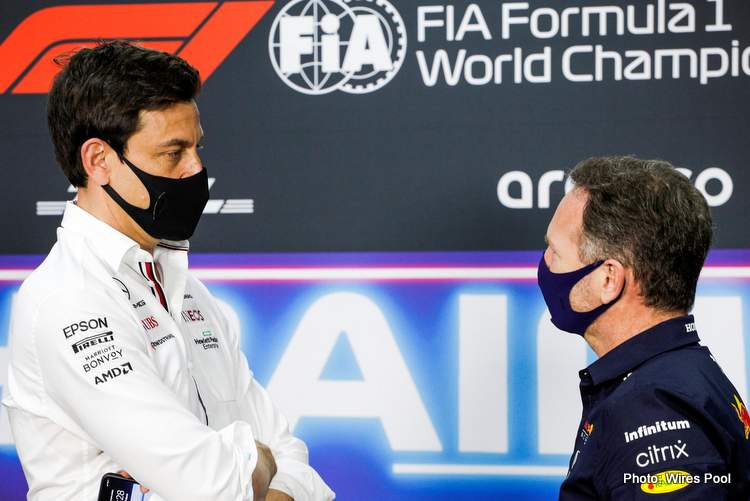 Mercedes team boss Toto Wolff declared the gloves were off as he and Red Bull rival Christian Horner engaged in further verbal sparring at the inaugural Qatar Grand Prix on Friday.

The two Formula 1 team principals have been needling each other all season amid the ebbs and flows of the title battle and they appeared together in a scheduled news conference between practice sessions at Losail.

The fighting talk came to the fore again, following on from last weekend’s race in Brazil that was overshadowed by suspicions and accusations.

Asked whether there was still mutual respect ahead of the final three races, Wolff replied: “There are many great people working in Red Bull and obviously many in Mercedes and it’s a hell of a fight.

“There is a respect for the capability that Red Bull has, definitely, and it’s clear that this is tough.

“It’s the world championship of the highest category in motor racing and what started as Olympic boxing went to pro boxing and is now MMA. Gloves are off and nothing else is to be expected,” declared Wolff.

Horner: I don’t need to go to dinner with Toto, or kiss his arse or anything like that

When asked for his view, Horner replied bluntly: “There is no relationship.”

Before describing this year’s F1 title battle between Max Verstappen and Lewis Hamilton as “the most intense political title fight” the team had ever experienced. Explaining that relationship and respect were different things and, of course, he respected the achievements of Mercedes and their seven-time F1 world champion.

Horner, who recently compared Wolff to a ‘pantomime dame’ after being labelled a ‘windbag’ before that by the Austrian, said they were just very different characters.

He continued: “Am I going to be spending Christmas with Toto? Probably not, unless you’re in panto this year? I might take the kids.

“You don’t have to be best mates with your opponents. How can you be? I think that would be dishonest to fake a facade when you’re competing against each other,” added Horner.

Mercedes are 11 points clear of Red Bull in the F1 constructors’ championship but Red Bull’s Max Verstappen is 14 ahead of Hamilton. (Reporting by Alan Baldwin)