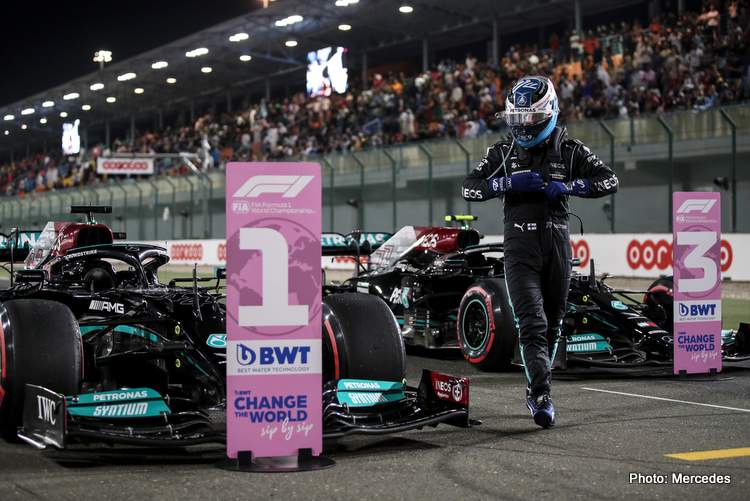 Valtteri Bottas is sitting in the Mercedes for the third last time in his career at Sunday’s Qatar Grand Prix, but that won’t stop him from helping teammate Lewis Hamilton in the Briton’s eighth Formula 1 World Title quest.

While showing strong pace in practice, when it mattered in qualifying today, Bottas could not match Hamilton nor Red Bull’s Max Verstappen in second, and will thus start from third on the grid, directly behind the sister Mercedes.

With the long drag down to Turn 1, starting behind the front row duo may well play into his hands and thus he could, purposefully or not, play a big role tomorrow evening, not only from the F1 Constructors’ Championship perspective, but also in the title fight between Max and Lewis.

Bottas summed up his evening under the Losail floodlights: “It has been a good weekend so far, until qualifying for me, but not sure what happened overnight.

Bottas: I personally don’t have much to lose

“I really had to push a lot in qualifying – I struggled quite a bit going into Turn 1 but I tried my best but I’m a bit confused as to what happened to the car overnight.

“I personally don’t have much to lose and I hope the grip is going to be good, but we’ve got two cars against Max so hopefully we can do something.”

As for starting from third, Bottas saw the positives: “It puts me on the clean side of the grid for tomorrow and we have both cars at the front of the pack.

“I don’t have much to lose and we have options, with two cars against one Red Bull, so normally that’s a good situation to be in. I’m sure it’s going to be a close race day,” predicted the Finn, who has all but sealed third place in the 2021 F1 World Championship with three rounds remaining.

Ahead of the first Qatar Grand Prix, Mercedes lead the F1 Constructors’ Standings by 11 points, largely thanks to Bottas being better than Sergio Perez, the wingman at Red Bull who qualified 11th.