Brundle: At no point did Max open the steering wheel 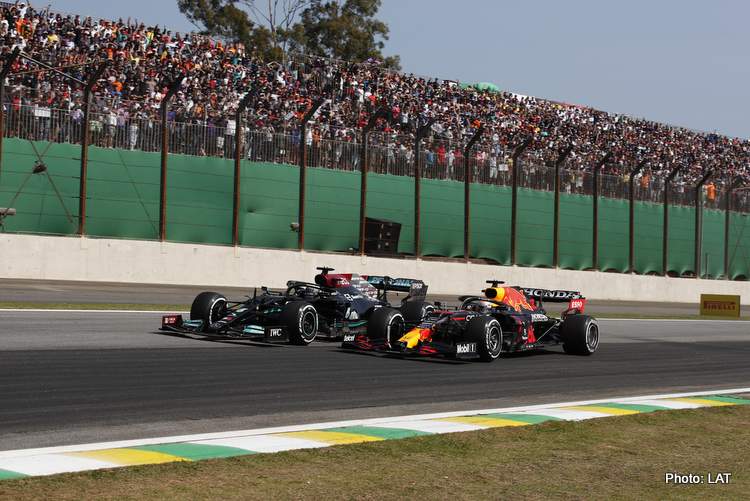 With Mercedes announcing that they will be requesting a review of the lap 48 incident of the 2021 Sao Paulo Grand Prix, Martin Brundle gave his opinion on the incident, claiming that Verstappen did not open the steering wheel towards Lewis Hamilton.

Brundle was providing his insight in his regular post-race column on Sky F1, where he also gave an opinion about the “DRS Saga” which has caused Hamilton to lose his top-starting spot for the Sao Paulo Sprint race.

No grey areas in F1

Brundle seems to agree with the Stewards’ decision to disqualify the seven-time Formula 1 World Champion, claiming the sport cannot afford grey areas in the Technical Regulations.

“In Formula 1, you can’t have any grey areas or fudges on technical regulations, otherwise you get creep on standards and issues,” Brundle wrote.

“Aston Martin found this out the hard way when missing just a little sample fuel at the end of the Hungarian GP – they were simply eliminated from the results.

“And the excuse that any transgression didn’t affect on-track performance simply cuts no ice whatsoever under the regulations,” the Briton explained, referring to Aston Martin’s failed attempt to reverse Sebastian Vettel’s disqualification from the 2021 Hungarian GP, due to the team’s failure to provide the mandatory fuel sample required by the FIA post race.

The former F1 driver, went on to comment on the current hostilities between the Mercedes and Red Bull camps, with each team relentlessly questioning the legality of his rival’s F1 machinery.

“Red Bull are convinced Mercedes are up to something with their rear wing, and Mercedes are indignantly wholly denying this,” he pointed out.

“The FIA must have inspected Lewis’s captive rear Merc wing to a high degree. It’s getting down to the championship wire now with it all to play for, and it’s becoming rather feisty and a little angry between the two teams and contending drivers on and off the track.

“And the FIA are referees in the middle catching the occasional punch,” Brundle admitted.

That incident everyone is now talking about

As for the lap-48-incident between the two title contenders, which seems to be escalating as the sport heads to Qatar in a few days, Brundle does not see any foul play there.

“In the beginning, it appeared that Verstappen could steal a third of a second over Hamilton every pass through the tortuous middle sector to help build a buffer on the pit straight from the Merc missile,” the Sky F1 pundit said describing the buildup to the incident.

“But Hamilton was relentless and on lap 48, Verstappen had to weave and defend, placing Hamilton on the outside but racing line into turn four.

“Max will say they both braked late, him from the dirty part of the track, and both ran wide. I’m sure that Max would also say that when he realised Lewis had gone into the run-off area, he straightened his car to do the same and accelerate away,” the veteran of 158 grands prix went on.

“On viewing the onboard footage, it confirms that Max braked very late and was slow and limited with his turn-in point, but at no point did he open the steering wheel towards Lewis,” he insisted.

“It was totally on the limit and could have easily gone either way with the stewards. It warranted a driving-standards warning black and white flag at least.”

As for Mercedes’ request for review, the 62-year-old said: “Mercedes have asked for a stewards’ review, but those claims rarely get a change of decision.

“In any event, Red Bull will say they cruised at the end and so any five-second penalty putting them behind Bottas would be unfair, Max would have just driven faster, to which Mercedes will say so would have Valtteri,” speculated Brundle.

“Hamilton remained very calm about the incident and the subsequent radio call to tell him no further action from the stewards.

“I strongly suspect his determination to pass Max soared at that point,” the Briton claimed.

But ultimately, Brundle believes that Hamilton and Mercedes were simply better in Sao Paulo: “Red Bull had few answers in front of Hamilton’s Mercedes on the day, and had no answers when behind him.”

On to the title showdown

With how matters were wrapped up in Brazil, Brundle sees the title going down to a big showdown.

“With Verstappen’s championship lead down to 14 points, after Checo Perez saved a point grabbing fastest lap off Lewis on the final tour, the championship will run until at least Saudi Arabia now,” he wrote.

“This story has plenty more to run, and surely on that form, it’s worth Merc considering a new internal combustion engine for the final big showdown.

“A five-place grid drop could be well worth it, given Lewis passed all the other 19 cars on the grid, 16 of them at least twice,” the 9-time F1 podium sitter concluded. (Follow me on Twitter @MallakJad)