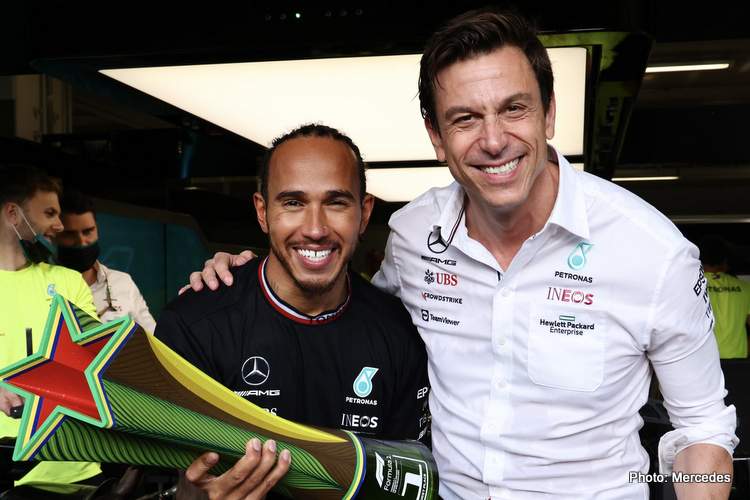 Toto Wolff, reflected on a dramatic weekend for his team in Brazil, where despite Lewis Hamilton’s victory in the 2021 Sao Paulo Grand Prix, Mercedes felt like everything was against them.

A rollercoaster of a weekend for the World Champions, from the lows of Hamilton’s engine penalty, and Qualifying disqualification, to the highs of his Sprint drive from 20th to fifth on the grid, and more importantly, the Briton’s scythe through the field from tenth on the grid to the top step of the Interlagos podium, beating title rival Max Verstappen in the process.

Now we know how Lewis must have felt all his life

Wolff reflected on the three days in Brazil: “What a weekend from this team. We started the weekend on the backfoot with our self-inflicted engine penalty, we got disqualified yesterday which was harsh, and then today in the race, things went against us too.

“This team has always been together, but these decisions have brought us so close. It felt like everything was against us and I think that’s what Lewis has felt all his life and we now feel it together as a team and we’re going to fight – that is the emotion we’re feeling in the garage at the moment.

“Yesterday Lewis produced one of the best drives we have ever seen,” Wolff said of Hamilton’s Sprint race. “I don’t know how many overtakes there were across the weekend but Lewis was left, right, and over them.

“And [in the race], his driving was immaculate. Max forced him off the road at Turn 4 and Lewis was very clever to avoid contact. It was great to see these amazing drivers but not giving a 5 second penalty? Come on!” the Austrian commented, clearly not happy with the Stewards’ decision not to investigate the incident.

Wolff’s demeanor was calm and diplomatic in the post race Mercedes media brief, as he may have loosened up after his star driver’s emphatic victory, but he was far from composed during the sprint when he told Hamilton, as he crossed the finish line, to “F@ck them all”, as well as gesticulating arduously at the TV coverage camera in the Mercedes garage, once the seven-time F1 Wolrd Champion overtook Verstappen for the lead in Sunday’s Grand Prix.

Hang this in the Louvre. 😂 pic.twitter.com/Xk9Ah6L8pB

There ain’t no gentlemen

Prior to Sunday’s race, the Austrian was speaking to motorsport.com, about Hamilton’s array of penalties over the weekend, and was crying foul, saying there are no gentlemen in the sport.

Clearly not happy with how the FIA handled the DRS saga, he said: “I don’t want to pick out any individuals, because everybody tries to do the best possible job in their role, but something went against the modus operandi in these last 24 hours.

“It was either under pressure from other stakeholders, or just different, and if the modus operandi is different now, you maybe need to look at others also with a more strict eye and severe eye,” Wolff said with an intimation of politics playing a role in the decision, and revealing that Mercedes will be staunch in their future handling of such situations.

“I can tell you that, in the next few races, we’re going to look at every single race part and race tape that’s going to fall off a car and ask questions,” clearly referring to Red Bull.

“I think in a way there was a gentleman’s agreement, if such a thing as a gentlemen’s agreement exists in F1 because there ain’t no gentlemen, but it doesn’t exist any more,” Wolff claimed.

“Our cars were always legal in the technical scrutineering,” Marko went on. “In any case, we are not worried. And he has been watching closely all year anyway.”

The Mercedes boss was clearly aggrieved by fact that Red Bull were allowed to fix their cracked rear wing in Mexico, while they weren’t granted permission to do the same in Brazil.

“You can have no millimetre of leniency of fixing things on a car,” he insisted. “If it’s broken, it’s broken, you can’t touch it. And this is how it’s going to go this year.

“You know, we’ve seen it with the Red Bull last weekend,” Wolff continued. “We have had many bargeboards, or bib failures, that were being put back because the FIA has our CAD drawings, they have the wings.

“We wanted to leave the [Hamilton] wing with them so they can cut it in to 1000 pieces. We weren’t allowed to look at the wing because it was simply damaged through the qualifying session and none of these arguments counted.”

He added:  “In the past, sometimes there was a common sense buffer that didn’t exist yesterday or today. But it’s all to the dot within the regulation. So you need to respect that.”

After Brazil, Mercedes lead Red Bull by 11 points in the Formula 1 Constructors’ Championship, whereas Hamilton reduced his deficit in the Drivers’ Standings to 14 points behind Verstappen, with three races remaining in the season. (Follow me on Twitter @MallakJad)