Sainz: I cannot be happy with today’s result 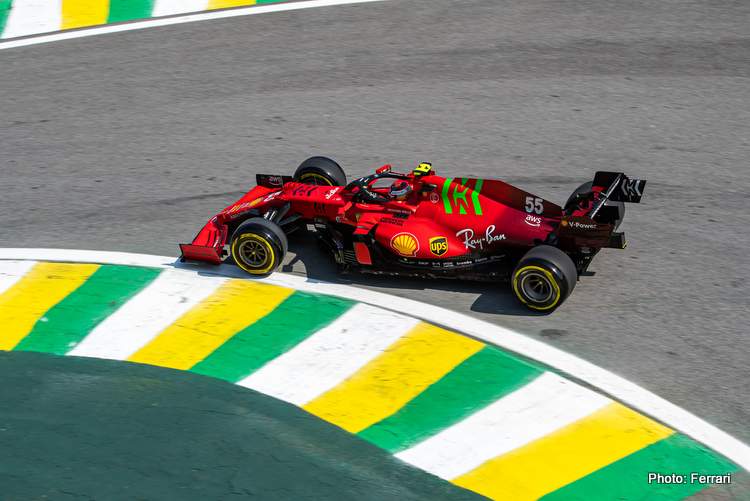 After being one of the stars of the Sprint race, Carlos Sainz had a tough 2021 Sao Paulo Grand Prix finishing sixth, and admitting he is not happy with his result.

Sainz did a fantastic job during the the Sprint on Saturday, finishing third after fending off a continuous attack from Red Bull’s Sergio Perez, keeping him at bay till the chequered flag.

All that was due to an excellent launch off the line from the Spaniard that put him in that advanced position, after which it was just about hanging on for dear life under the Mexican’s relentless attacks.

What a difference one day makes

Sadly though, Sainz was unable to execute a decent start during the Grand Prix, and ended up tangling with McLaren’s Lando Norris, and plummeting down the order to finish an eventual seventh.

“I cannot be happy with today’s result as I think if I had made a clean getaway from the line it would probably have ended with P5,” Sainz said in his team media brief post race.

“We need to keep digging into that to understand what was the cause, as we are lacking consistency off the line,” he pointed out.

“I then had contact with Lando (Norris) and that ended up costing me positions to Checo (Perez) and Charles. From there, the pace was strong the entire race, but that was it.

The Spaniard tried to find consolation with some positive aspects of his race: “There are a lot of positives to take away from this weekend.

“First of all the points that we were able to collect as a team to extend the lead over McLaren and secondly the good feeling with the car, the tyre management and the strong pace since Friday,” he explained.

“It’s just frustrating that I haven’t made the most of the last two races after eventful starts, but we’ll keep pushing! On to the final race of this triple-header,” the 27-year old concluded.

In the other Ferrari garage, Charles Leclerc had a better Sunday than his teammate, after being outclassed by the Spaniard in qualifying and the sprint.

The Monegasque ended up finishing the Grand Prix in fifth, ahead of his teammate, after capitalizing on Sainz’s troubled start, and driving a well-managed race.

“That was a really nice race,” Leclerc said in Ferrari’s press release. “We weren’t satisfied after the Sprint Qualifying yesterday, so we worked hard last night to analyse where we could make some improvements.

“And that’s what we applied today, so I am very happy with the performance.

“I had a very good start, which was my first target,” he explained. “After that, the race was all about managing the tyres well and maintaining the gap to those behind me.

“It’s also looking good in terms of the gap we are building to our direct competitors in the championship, so overall, a very positive finish to the weekend,” the two-time race winner concluded.

The boss is satisfied for now

Mattia Binotto, Ferrari’s team principal, who was absent from the team’s pit wall in Brazil, expressed his satisfaction with the team’s result at Interlagos, especially in comparison the McLaren’s miserable weekend as the British team scored only one point courtesy of Lando Norris, while Daniel Ricciardo retired due to loss of power on his MCL35M.

Binotto gave his verdict on Ferrari’s weekend in Brazil, he said: “A good result in terms of the championship, given that we have doubled our lead over our closest rivals in the Constructors’ classification.

“Having said that, a 31.5 point lead doesn’t mean that it’s done and dusted, far from it. We know the situation can change in an instant and that our opponents are very strong,” the Swiss-born Italian admitted.

“During what proved to be a busy weekend, the team, both at the track and back in Maranello, worked very hard and with great precision, tackling every situation with the right approach.

“Today, every aspect of the race was managed well – strategy, tyre management and pit stops – and the drivers produced a clean and effective performance,” a satisfied Binotto revealed.

“There are now just three races to go and we must continue in this fashion to reach what has become our goal for the end of season,” the 52-year-old concluded.

Ferrari scored 18 points in Brazil compared to 1 for McLaren, which means that with three races to go this season, the Maranello squad are well placed to meet their announced target of third in the 2021 Formula 1 Constructors’ Championship.(Follow me on Twitter @MallakJad)

It’s a wrap for #BrazilGP 🇧🇷

On to the final race of this triple header! Thanks Tifosi for your constant support ❤️#essereFerrari 🔴 #Charles16 #Carlos55 pic.twitter.com/CotzR6r3Yn