Data Crunch: Did Red Bull give Verstappen too much Wiiing? 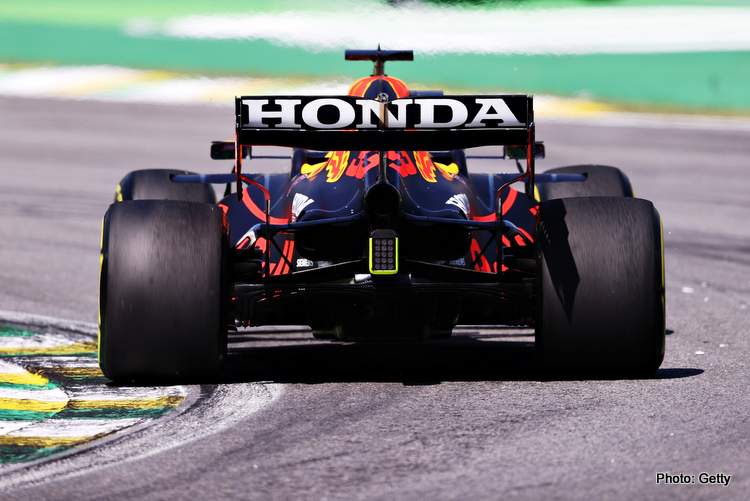 Red Bull Racing and Formula 1 Championship leader Max Verstappen could not hold on to victory in Brazil due to the ferocious pace of Lewis Hamilton’s Mercedes. The numbers, however, show that Red Bull own much of the responsibility for their tough day at Interlagos.

One of the most pronounced memories of the 2021 São Paulo Grand Prix, was the concerted effort made to paint the Mercedes as having a significant straight-line speed advantage on its rivals, but does that speculation hold water?

Just as at the previous round in Mexico, the São Paulo Grand Prix was supposed to be another race leaning favorably towards the Red Bull squad, and the strength of their RB16B. The last time F1 visited the Brazilian circuit two years ago, Verstappen controlled the pace from the front as Hamilton played bumper cars behind him.

In 2018 the Dutchman had a significant advantage over Hamilton when the Racing Point of Esteban Ocon trying to un-lap himself, got tangled with Verstappen’s Red Bull costing him a certain victory.

It should be noted that Energy Drinks outfit controlled these last two outings in Brazil, with a significantly inferior car to that of Mercedes and as such, with this year’s car being far better matched to the Mercedes overall, it seemed like they were heading to another Brazilian GP grand slam dunk, especially with Verstappen’s recent form.

Right from the get-go, the Red Bull camp was preaching a straight-line pace advantage for Mercedes, a believable narrative which was reinforced after Mercedes flashed a near fourth-tenths pace advantage over their rivals in FP1, albeit with a new engine.

Despite this intensified narrative that the Mercedes cars are ultra-fast, we’re also being told that Mercedes’ engines are also vulnerable to reliability issues all at the same time, and as such the new engine in Hamilton’s W12 landed the team a five-spot grid penalty. This is the second engine penalty Hamilton has received this season, with the first occurring during the Turkish GP, only a handful of races ago.

Mercedes’ pace advantage in FP1 would re-emerge one session later on Friday afternoon, during a chilly qualifying session with Hamilton extending his advantage to just about half a second on his Championship rival. Then Hamilton’s car failed a post qualifying technical inspection which sent Red Bull’s Mercedes-pace-advantage narrative and the entire weekend in general, into overdrive.

Without delving into the technical matters of the Mercedes, I’ve gone ahead and pulled maximum speed data from the FIA and averaged the Speed Trap, Finish Line, Intermediates 1 and 2 speeds from every qualifying session this year excluding São Paulo qualifying, to better interpret this straight-line speed advantage Red Bull seemingly refuse to stop taking about. 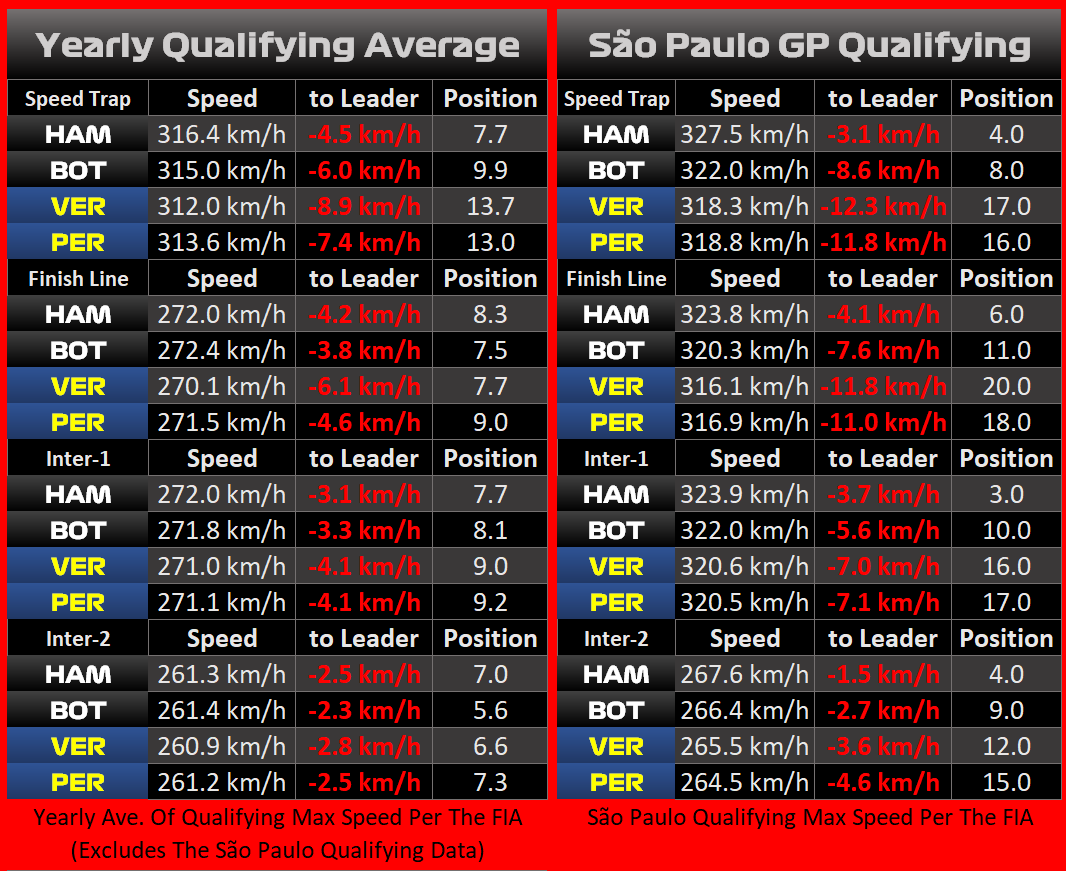 What becomes immediately apparent is that, while Mercedes showed a slight improvement in straight line speed on average, Red Bull went painfully backwards. During Friday qualifying, Verstappen was third-last in the speed trap, dead last on speed at the finish line, fourth-last at the Intermediate 1 line and 12th fastest of all at the Intermediate 2 line.

The glaring issue in the matter of Mercedes’ straight-line speed is in fact almost entirely rooted in Red Bull’s lack of it thereof. While Verstappen was dead last on speed at the finish line, the AlphaTauri of rookie driver Yuki Tsunoda was the fastest of all drivers, 12km/h faster than Verstappen, and both fitted with Honda power. 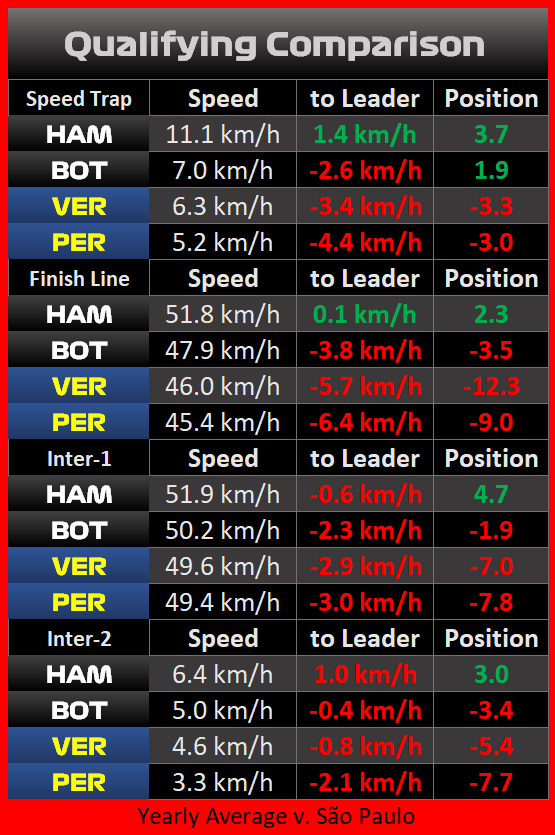 For Mercedes, the new engine appears to have benefitted Hamilton by about 5km/h over teammate Valtteri Bottas. In a direct comparison to Verstappen, Hamilton appeared to have a 10 km/h pace advantage over the Dutchman on ultimate outright speed.

Yes, Lewis Hamilton did run fractionally quicker against his yearly average, and yes visually the Mercedes car was explosively quick. Looking at the numbers it appears the advantage the Briton had was grossly amplified and misrepresented by a devastating lack of performance from Red Bull. The numbers tell us that Red Bull went too far trying to protect a mid-circuit advantage over Mercedes and some how completely lost their way.

Back in 2019, it was Red Bull who reached out to the FIA requesting clarity regarding fuel regulations directed pointedly at Ferrari, regarding fuel usage rumors which were swirling at the time around the Ferrari power unit.

While the details regarding Ferrari and FIA investigation remain speculative at best, it is widely regarded that it was Red Bull’s request for clarity which set into motion, and eventually uncovered the alleged illegal fuel usage relating to the Scuderia’s power unit. Red Bull are far too clever to point and insinuate an issue, to not proceed forward with some level of action beyond just continuous on-air complaining.

The weekend was topped off by Christian Horner once again expressing that the Mercedes of Lewis Hamilton was unfairly quick going as far as to point out that Hamilton had a 30km/h speed advantage on Verstappen while in DRS striking distance. But when Horner was asked point blank that, if he was so sure the car was faster than it ought to be, then why not protest, Horner offered not to make such a claim at this time.

Traditionally, Red bull and Mercedes have led the rest of the field by around one second a lap on average. How did the Ferrari have the pace to make a legitimate pass on Verstappen in Sprint qualifying? How on earth did Sergio Perez finish behind Carlos Sainz?

It’s because Red Bull themselves owned their fair share in a baffling loss of pace this weekend in Brazil, they managed to beat everyone except the one they needed to beat.

On a final note, Verstappen’s speed traps were even worse on Sunday registering two dead-last traps, but let’s leave that one alone for now.

Next, we head to Losail International Circuit, which just so happens to be the home of MotoGP’s straight-line speed record. Food for thought…