Sainz: It was very difficult to keep Checo behind 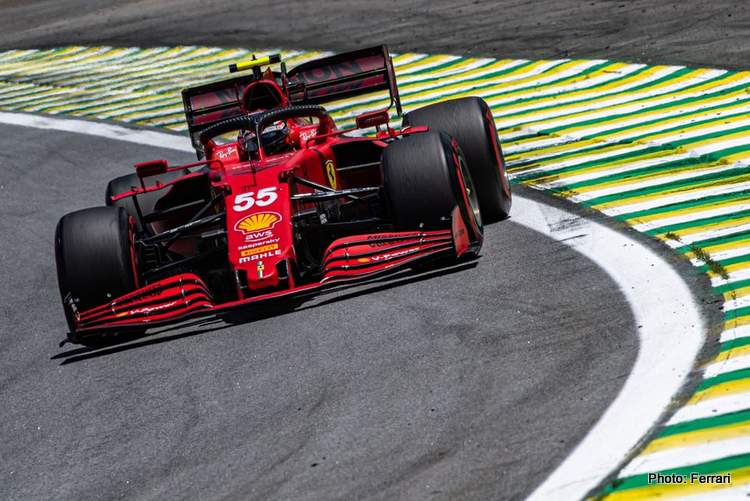 Carlos Sainz had a great start to the 2021 Sao Paulo Sprint , making up positions, and then going on to fend an arduous attack from Red Bull’s Sergio Perez, admitting it was very difficult keeping him behind.

It was a great performance from Sainz, who is increasingly proving to be a match to his highly rated teammate Charles Leclerc, as he absorbed the pressure from Perez’s “raging bull” for the whole sprint, despite falling prey to Max Verstappen early on.

“That was a very good Sprint Qualifying for me after one of my best starts of the season,” the Spaniard said in his team’s press release.

“I feel starts are one of my strengths, and I have been working a lot this year to nail them with this car,” he revealed.

“Going for the Soft tyre was a 50/50 choice. We knew they would be good for the first two or three laps but from then on tyre management and defense would be critical.

“I managed to find the right balance between pushing at the start and maintaining a stable pace after that,” Sainz explained. “The slightest mistake and the Red Bull could have overtaken us easily as they had a much faster pace.

“It was very difficult to keep Checo behind, but I’m happy I managed it, because it gives us an extra point and a good opportunity tomorrow.

“The race will be tough, but I’ll try to keep up this pace and let’s see if we can hold on and bring home a good result,” the 27-year-old concluded.

“Carlos drove a great race, starting with an incisive attack on the opening lap and then defending in fantastic fashion in his long duel with Perez, which went on for almost 20 laps,” he said.

“Thanks to a great job from the driver and the progress made with the car, especially since the introduction of the new hybrid system, he was able to stay ahead of a Red Bull that had the advantage of DRS and a tyre compound that in theory should have been better over distance,” Mekies explained.

On the other side of the Ferrari garage, Leclerc didn’t have as good a day as his teammate, and finished his sprint four places behind in seventh.

The Monegasque expressed his feelings post-sprint in his team’s media brief.

“We still have some work to do ahead of the race to understand why we could not reproduce the good pace that we had on the Mediums this morning,” he revealed.

“The Softs may have been a small advantage at the start, but we expected the Mediums to be better later on,” Leclerc explained.

“Unfortunately, the temperatures dropped at one point and we started struggling, especially with the fronts.

“The race is tomorrow though, so our full focus is on that and we will work out where we can improve to fight our way up the order,” Leclerc vowed.

Mekies explained Leclerc’s tyre struggles during the sprint: “We decided to start Charles on the Medium and he also got off the line very well, but then he was not completely happy with the car and dropped one place down from his grid position.

“He will regain that for tomorrow’s start because another driver has a grid penalty,” referring to Lewis Hamilton’s five-place grid penalty. “Now it’s down to us to improve the car so he can get the very best out of it.

“We can expect a very demanding race tomorrow but we are starting from a solid base in terms of our grid positions and the overall performance of the team and drivers.

“We have a clear goal for this final part of the season and we will do our utmost to achieve it,” Mekies concluded, hinting at third in the Fomrula 1 Constructors’ Standings.

Ferrari will start Sunday’s race third and sixth, while McLaren, their closest rival this season, will start fifth with Lando Norris and 11th with Daniel Ricciardo. (Follow me on Twitter @MallakJad)