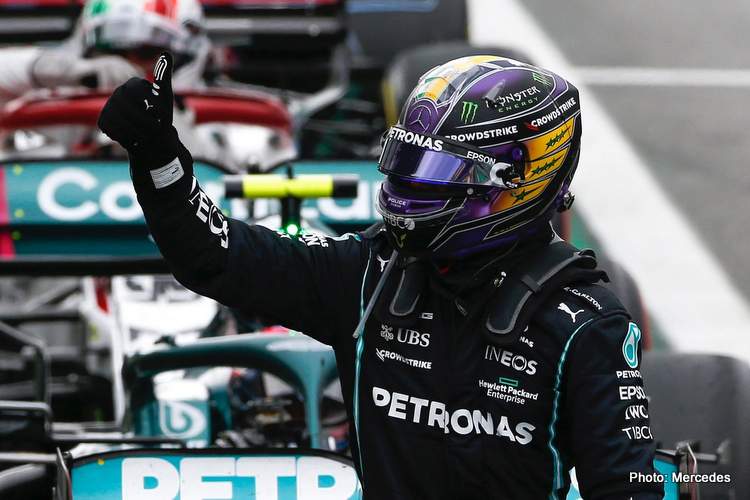 “Brilliant job, damage limitation. Fuck them all,” declared Mercedes boss Toto Wolff as we all witnessed Lewis Hamilton at his very best, turning 20th on the grid into fifth place by the end of the 2021 Sao Paulo Grand Prix Sprint.

Already compromised for Sunday’s race with a five-place engine penalty related grid drop, Hamilton’s weekend went further south when his Mercedes DRS system was found to be illegal and he was sent to the back of the grid.

Hence Wolff’s declaration over the team radio as the seven-time Formula 1 world champion crossed the line after delivering a masterclass of damage control, defying the penalties that have come at the wrong time of his title battle with Max Verstappen, who finished second on the day to increase the points gap to 21 with four to go.

In the cockpit, on the slow down lap, Hamilton acknowledged Wolff’s war cry: “Copy. It’s not over yet.”

Speaking to Sky F1 immediately after the Sprint race won confidently by Valtteri Bottas in the other Mercedes, Wolff explained his statement: “I didn’t mean it towards any of the regulations. It’s generally a mindset that we have.

Wolff: Great to forget the politics for a moment and just concentrate on the racing

“Yesterday the car was being tested and today two hours before the race we got the information that we were disqualified and that is in a way sad because there are procedures in F1, there is a certain modus operandi and a protocol we have to follow.”

The Mercedes team boss went on to sum up the sport’s third-ever Sprint race from his team’s perspective: “Sometimes after the greatest frustrations with F1, you see these awesome 60 minutes with Valtteri, totally in control of the race, had a great car, good strategy, good straight-line speed and was just brilliant and not letting the other guy close.

“Lewis had 16 overtakes to finish fifth and that’s certainly great to forget the politics for a moment and just concentrate on the racing.”

Without the disqualification, on the basis of what Mercedes unleashed, Hamilton is sure to have won this Sprint had he started from top spot which he earned in qualy on Saturday. The five-place grid drop would have meant sixth place instead of tenth.

Wolff explained what went wrong: “We failed consecutive tests by the tiniest margins and in the past that would have meant, fix it. We saw that with the Red Bull rear wing last weekend. The wing was simply damaged through the qualifying session.

Wolff: At least it’s encouraging to see we can overtake

“To be fair enough, the steward did the job, we failed that one test and their argument needs to be respected. This is why we also decided not to appeal, for philosophical reasons, if the stewards decide you have to take it on the chin, and it goes both ways.”

Sunday’s race is arguably the most important of the campaign so far for Mercedes, and Lewis in particular. The Red Bull will be strong but they will be alarmed that Verstappen did not have the firepower to attack Bottas, while Sergio Perez could not get past Ferrari’s Carlos Sainz even when both had DRS.

In contrast, Hamilton could scythe his way past everyone with ease including both McLaren’s, Charles Leclerc’s Ferrari and the Honda-powered Alpha Tauri of Pierre Gasly.

Wolff knows what his team has for the Grand Prix: “I believe we have a good car here. We’ve seen over 23 laps definitely we didn’t suffer with the tyres. [Sunday] is a different game again because it’s going to be much hotter. But at least it’s encouraging to see we can overtake.

“And Lewis isn’t starting from P20, but P10, and Valtteri’s right up there on pole and he’s certainly going to race for a victory. It’s certainly more encouraging than it looked 90 minutes ago,” affirmed Wolff.

Some of you forgot just how good this man is. 🖤🔥pic.twitter.com/mu3LCgxcVN