Verstappen: The goal is to start from pole on Sunday 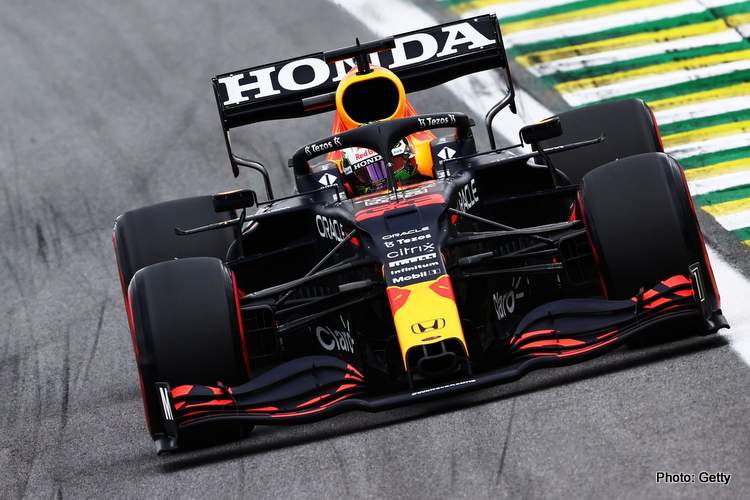 Red Bull’s Max Verstappen will start the 2021 Sao Paulo Grand Prix Sprint from second place on the grid knowing that for Sunday’s race he has a very good chance of starting from pole.

Title rival Lewis Hamilton will start from pole, out-qualifying Verstappen by a hefty four-tenths of a second, however even if the Mercedes driver wins the Sprint on Saturday at Interlagos, he will drop five places on the grid due to PU related penalties.

Thus Verstappen need only finish behind Hamilton in the Sprint to ensure the Dutch ace starts from pole position for Sunday’s Grand Prix. He could thus well sacrifice the one point Hamilton should outscore him if they finish HAM-VER on Saturday with the big haul the target for Max on Sunday.

After qualifying, Verstappen said in parc ferme: “When [Mercedes] take a new engine they have a bit more power for the weekend, so it’s not a big shock. I’m happy to be second, it’s a good position to start from – we want to be closer.

“Sometimes you have to be realistic and I don’t think there was any more in it. There aren’t that many points in the Sprint race so I hope to have a good first lap and of course start from first on Sunday.

“Of course, the most important race is on Sunday and I think it’s going to be a lot warmer which will change the behaviour of the car as well, so we’ll see,” added Verstappen who leads the championship with the Sprint and the four remaining full points scoring rounds.

Horner: To be on the front row, we can be happy with that

Team boss Christian Horner echoed his driver’s suspicions: “I think the new Mercedes engine has definitely given them some extra horsepower so I think second was the best that we could have hope for.

“To be on the front row tomorrow, we can be happy with that. So much can happen in these sprint races, as we’ve seen this season, so you’ve just got to go for it at the start, then see where you are.

“I think we’ve got a good race car and it’s going to get hotter throughout the weekend so that will also be a factor here, it’s been pretty cool on track today so let’s see in the race,” added Horner.

In the sister car, Sergio Perez will start the Sprint from fourth, having qualified half a second down on his pole-winning teammate.

The Mexican reported: “It was a bit tricky today, especially in Q1 having to use two sets of tyres, so we started on the wrong foot in qualifying, but we were progressing well and gaining into Q3.

“Then I think the track cooled down a bit and we didn’t read the conditions as well as we could have. We got it together for our final lap and we only lacked half a tenth or so to be further ahead.

“That said, fourth is a strong position to start the sprint race from. I think Mercedes’ new engine seems to be working pretty well, Lewis was untouchable today, but we will see tomorrow.

“Hopefully tomorrow we can have a good sprint race because the car has shown some good pace and I think it should be looking good,” added Perez.