Hamilton: I should use Senna flag and colours more often 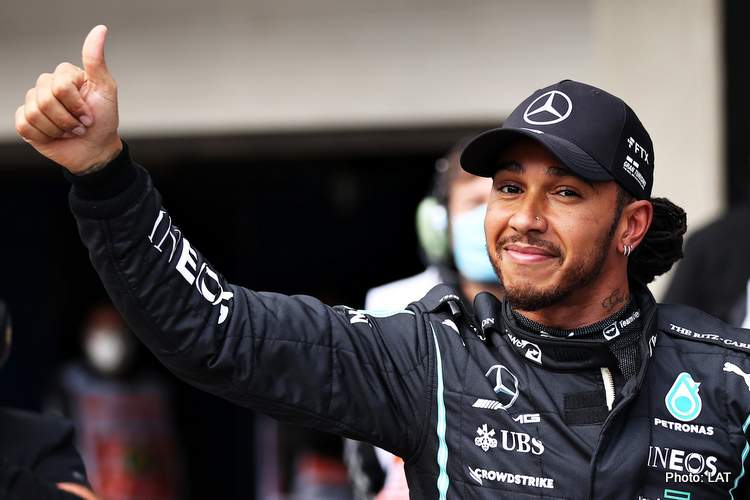 From now on, Hamilton has to maximise every points scoring opportunity in the remaining four races, plus Saturday’s Sao Paulo Grand Prix Sprint for which he will start from top spot

No matter what happens in the race to determine the grid for the Sprint – offering points (3-2-1) to the top three finishers – Hamilton will take a five-place grid penalty on Sunday, for the engine PU change made to the #44 car ahead of this weekend’s Grand Prix at Interlagos.

Thus winning the Sprint is number one priority for the Hamilton, as he needs to close that 19 points gap with every chance he has, even if he wins and Verstappen finishes second, that one point could make the difference, and even be decisive, come the end of the season when the title is decided.

Today, it was a case of ‘cometh the hour, cometh the man’ in qualifying, as Hamilton’s new PU was clearly off the top shelf and gave him the kind of top speed that even had the Sky F1 commentators drooling.

But it took Hamilton’s genius in the cockpit to destroy his rivals as he did, on one of the shortest tracks on the F1 calendar, which the 4,3km Autodrome Jose Carlos Pace is.

After having his first effort in Q3 nulled out because of a track limit infringement, Hamilton gave it a second shot with all the pressure on – in no mistakes allowed territory.

He went yellow on the first sector (where he earlier duffed it) but then scorched around the other tw thrid of the track to pop to the top with a jaw-dropping 1:07.934s, a whopping 0.482s faster than Verstappen, over half a second up on Valtteri Bottas in the other Mercedes.

It was the kind of lap that would have made qualifying maestro and Hamilton’s childhood hero Ayrton Senna proud; indeed in parc ferme after the session, the Briton made mention of the local hero, whose spirit looms large in Sao Paulo this weekend.

Hamilton: The first pole in a long time, so a big, big thank you to the team

“I’m so happy to be back here in Brazil! One of the marshals just said to me, ‘the Senna flag and the Senna colours – you should use them more often!’ beamed Hamilton, after claiming his 102nd pole position, his first since Hungary before the summer break.

“The first pole in a long time, so a big, big thank you to the team because they have been working flat out from the last race. It was a really good qualifying session and I’m super happy with it.

“We’ve got the penalty [for Sunday’s race] but we’ll give it everything we’ve got. I’ll do my best to try and get through the field.

“I feel really grateful. It’s crazy because it’s been a while – but it feels like the first,” added the ringing F1 World Champion.

As for the unexpected pace unleashed by Mercedes on Friday, Hamilton admitted: “I don’t know how we can go from one track where they are half a second quicker, to this.”