Bottas: Hopefully lap one will be full of action 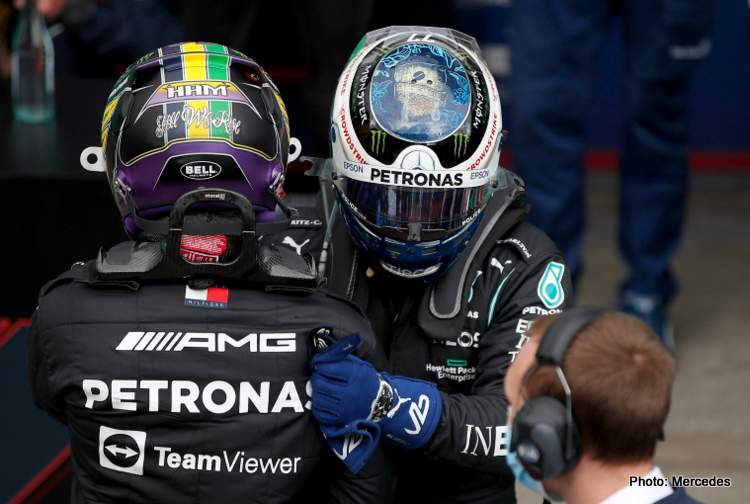 What a difference six days made for Valtteri Bottas, last Saturday in Mexico he powered to pole position with a stellar lap but today in qualifying, for tomorrow’s Sao Paulo Grand Prix Sprint, he was unable to sustain that form.

These ups-and-downs in his performances, compared to teammate Lewis Hamilton’s incessant consistency, are ultimately what made the Finn surplus to requirements for Mercedes beyond 2021.

This time out at Interlagos, Bottas will start the third Sprint Race of the season from third on the grid, behind the two F1 title contenders Hamilton in top spot and Red Bull’s Max Verstappen beside him in second.

Bottas’ best effort of 1:08.469s was over half a second shy of Hamilton’s top time, and he knew he should have done better: “It was a bit tricky, practice one, and didn’t quite feel comfortable in the first sector.

“It got a bit better in qualifying but still the main place I was losing to Lewis was Turn One and Two and a bit on the straight. Not fully satisfied.

“It’s still a good starting place and all to play for and hopefully lap one will be full of action and we can make some progress towards the front!,” added Bottas inadvertently, or not, hinting at Verstappen and Hamilton getting into a not unfamiliar bout of argy-bargy.

Bottas has a key role in both the Sprint and Grand Prix as Mercedes seek to win the F1 constructors title for an eighth consecutive season and of course the role he can play to help teammate Hamilton claim his eighth F1 drivers’ crown.

Last week in Mexico, Bottas took flak from his team and pundits for not defending Verstappen’s brazen move around the outside of both Mercs as they roared into Turn 1; the Red Bull driver took the lead there and then, before going on to dominate the race.

VALTTERI: “I’m not fully satisfied. Still a good starting place [for tomorrow]. All to play for. And hopefully Lap 1 will be full of action”#BrazilGP 🇧🇷 #F1 pic.twitter.com/vuvEmdoRqH