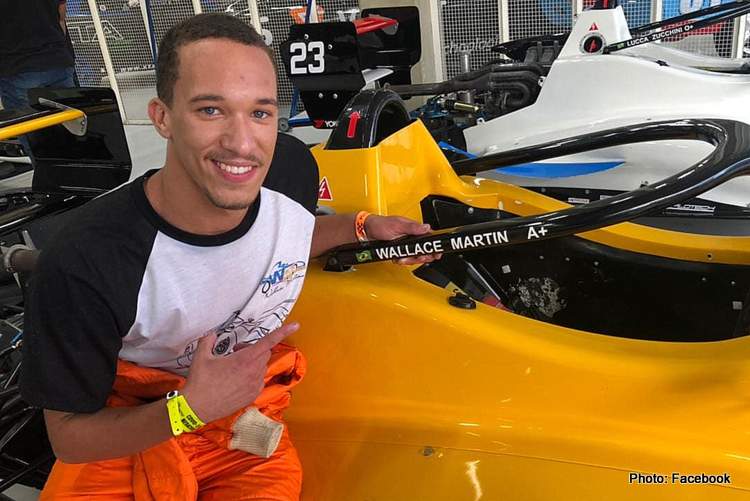 A young Black driver on Brazil’s motor racing circuits has won the moniker ‘Hamilton of the favelas’ and the popular prospect says he is inspired by seven-time Formula 1 world champion Lewis Hamilton to travel the same path on and off the track.

Wallace Martins, who currently drives in the Formula Delta category, got the nickname from other drivers because of his similarities – in looks and driving style – to Hamilton.

An engaging 18-year-old, Martins does not mind the comparison and says one of his dreams is to emulate the Briton: “I think he is a driver that is very dedicated to what he does. He wins one race and he’s already thinking about winning the next one.

“And then there’s his story. He came from a poor background and is Black and is the only Black driver in Formula 1. There’s a lot about his story that is inspiring.”

Like Hamilton, who has spoken about racism, the humble Martins has faced a number of obstacles in his fledgling career.

He is competing against people who have raced in the United States even though he has never been outside Brazil.

When he started out in the notoriously expensive motor racing business he would race once and then sit out the next two or three while friends and family sold t-shirts and organised whip-rounds to raise enough money to get him back on the grid.

During the pandemic he tested cars and worked as a mechanic in return for food for his family.

“None of it has been easy,” he told Reuters. “It’s got a lot better but it’s still not easy.”

Martins began kart racing aged 10 and after success there moved on to Formula Vee and then Formula Delta.

He has eight wins and 21 podiums from 44 career races, according to Driver DataBase, a motor racing website, and currently sits in third place in the Copa Yokohama, the trophy given to the best rider over the season’s last three races.

The final race is on 19 December at Interlagos, the same circuit where Formula 1 drivers will race this weekend.

Recent stories focusing on Martins’ talent and struggles have helped attract sponsors and have also shone a light on his background as a poor Black man in an expensive sport.

“Everyone you see (racing) has a sponsor and when you ask them about it, it turns out they are the son of the shop’s owner or something like that,” Martins said, without a trace of bitterness. “So it’s a very elite sport.”

Martins knows how difficult it is to break into Formula 1.

Although Brazil is a hotbed for the sport, it has not had a top-level driver since Felipe Massa retired in 2017 and no drivers’ champion since Ayrton Senna in 1991.

In order to succeed Martins would have to leave Brazil and then climb through the ranks in Europe.

Though still a teenager, he is savvy enough to know that even at this level his presence is symbolic: “I think about being an inspiration one day for young people, for diversity. I feel like I am (breaking down barriers). I hope that other young people like me can one day reach a top level.” (Reporting by Andrew Downie)